The Nissan Sentra is a small sedan that competes with the Toyota Corolla, Hyundai Elantra, Honda Civic, and Chevrolet Cruze. The Sentra is aimed at budget-conscious young new car buyers and small families seeking a no-frills sedan. Until 2007, the Sentra was considered a sub-compact car but was reclassified by the EPA because of its spacious interior. The Nissan Versa was added to the lineup as an entry-level car.

The 2019 Sentra is sold in four trims: S, SV, SR, and SL. Two other performance-oriented Sentra models are sold as separate vehicles: The Sentra NISMO and Sentra SR Turbo. The SR Turbo is based on the standard Sentra SR and features an upgraded 1.6-liter turbocharged four-cylinder engine with 188 horsepower and 166 pound-feet of torque. The car has a standard manual transmission but is available with a specially-tuned version of the continuously variable transmission found in other Sentra models. Steering and brakes are upgraded, and the Sentra SR Turbo uses larger 17-inch wheels with stiffer suspension components.

The Sentra NISMO is designed to be more aggressively styled than the SR and SR Turbo models and has unique aerodynamic bodywork, NISMO badges, dark chrome door handles, 18-inch wheels, and a NISMO exhaust. Inside, the Sentra NISMO has red accents and many of the upgraded technology features that are found on the Sentra SL.

The Sentra has been around for nearly 40 years and is in its seventh generation. Known as the B17 Sentra, the current version has been on sale without a significant overhaul since 2013. The car was given a facelift for the 2016 model year. eviewers note that, while the Sentra has been updated with current safety features and technologies, interior components and the overall design are behind more recently-updated rivals like the Toyota Corolla and Honda Civic.

The Sentra is due for a complete overhaul soon, but changes for the 2019 model year are less significant. Updates include NissanConnect, which is now standard for all trims except for the base model. The technology package brings Apple CarPlay and Android Auto to the Sentra for the first time. There is also a new SV Special Edition package that includes upgraded 17-inch wheels, rear disc brakes, blind spot monitors, rear cross-traffic alerts, intelligent cruise control, a power sliding glass moonroof, and special edition badges.

The Sentra’s exterior loosely mirrors the designs of its larger cousin, the Nissan Altima. Reviewers make a note of the Sentra’s athletic curves and fender flares. The sharp “V”-shaped grille is flanked by angular LED running lights, and the lower bumper can be upgraded with fog lights in higher trim levels. Many critics like the Sentra’s clean and athletic lines but take away points for an overall design that doesn’t take many risks in the styling department. 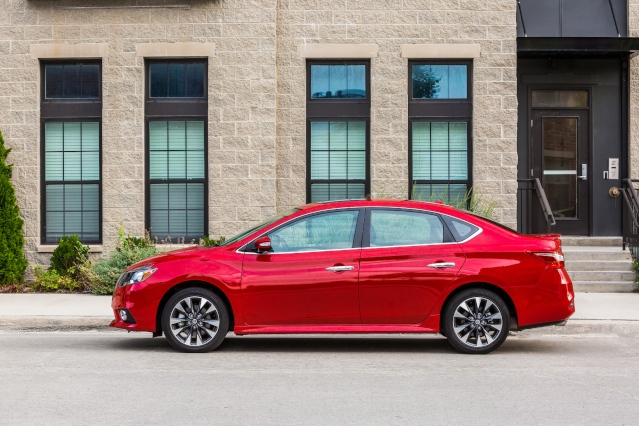 Higher trims like the SR get larger 17-inch 10-spoke wheels, lower body side sills, a rear spoiler, fog lights, and chrome exhaust tips. he Sentra NISMO has additional front spoilers and aerodynamic work and a NISMO spoiler on the rear deck lid. This model also comes with 18-inch wheels – the largest available on any Sentra. 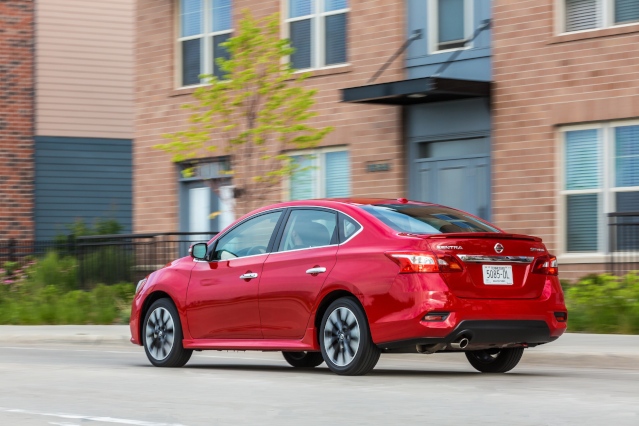 The Sentra has one of the largest interiors in its class – large enough in the latest versions to cause the vehicle to be upgraded from a sub-compact car to a compact car by the EPA. With 111 cubic feet of interior space, critics like the Sentra’s rear seat legroom and generous front and rear seat headroom. Even so, the high seating position in the front row can cause issues for taller drivers. 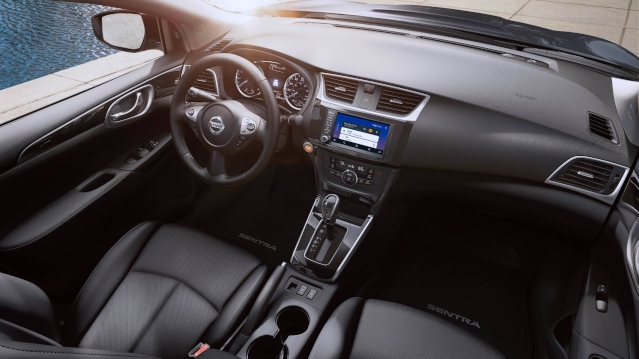 The rear seats are also placed high in the cabin which helps with entry and exit. Reviewers praised the Sentra for its sizeable back door openings and high roof, which makes seating for adults much more reasonable. 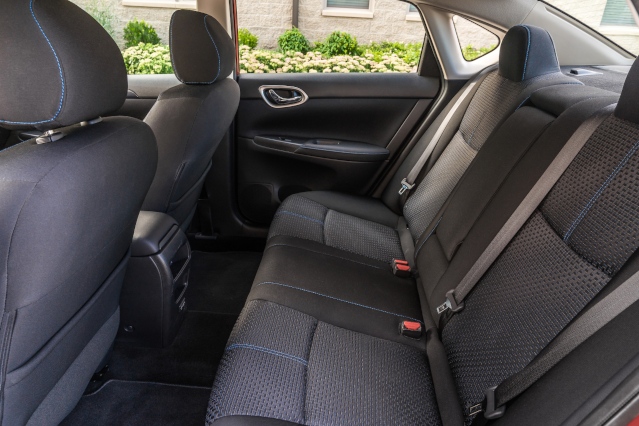 Many critics note that the Sentra’s interior is of good quality when compared to other vehicles in its segment, but rivals like the VW Golf and Honda Civic are more polished overall. Parts of the cabin that are frequently touched by passengers are quality and well-padded, and the interior materials don’t feel cheap or hastily put together. A common complaint among critics is the Sentra’s dated interior feel. Since its last major update in 2013, the Sentra’s interior has not seen significant changes to its components. While robust and well-constructed, the Sentra is outdone by competitors in the segment. 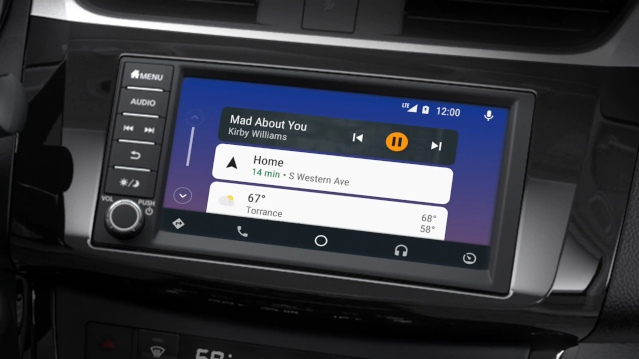 The Sentra is considered to be a practical car, especially for its size. Interior space adds up to 111 cubic feet, which is among the best in the Sentra’s class. A long wheelbase of 106.3 inches contributes to the spacious interior and also allows for 37.4 inches of rear seat leg room. It has 15 cubic feet of trunk space which stacks up well in the segment, and the 60/40 folding rear seats open up the cargo space for larger and longer items. Compared against other cars in its segment, the Sentra is slightly larger than the Toyota Corolla, Hyundai Elantra, and the Honda Civic Sedan. Reviewers note that the difference is not as noticeable in the real-world operation of the vehicles, but the Sentra is technically larger on the inside than the other three cars. 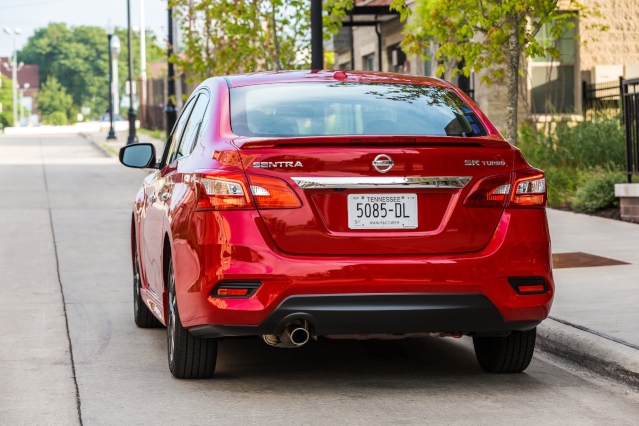 Even with its large trunk and folding seats, critics note that interior storage space in the Sentra is only adequate. Cup holders are small, especially for travel mugs and large take out cups, and the center console storage area is not sufficient for larger items. Door pockets and seat back pockets offer supplemental storage but are also too small to hold items much larger than a sunglasses case.

The Nissan Sentra has earned good scores from safety testing agencies like the IIHS and NHTSA. In IIHS testing, the 2019 Sentra was rated “Good” for driver side and passenger side crashworthiness and also earned a “Good” rating for roof strength and head restraints/seats. Front crash prevention is rated as “Superior” with optional equipment installed. The IIHS also rated the Sentra’s headlights as “Acceptable” – its lowest score in testing. The Sentra earned a Top Safety Pick rating from the agency.

The NHTSA has not yet rated the 2019 Sentra but awarded the very similar 2018 model four out of five stars overall.

The Nissan Sentra is not designed to be a fast car, but reviewers note a smooth and confident ride with good braking and steering performance. The Sentra comes standard with a 1.8-liter four-cylinder engine that has 124 horsepower. Among the slowest cars in its class, the Sentra equipped with this engine has a 0-60 mph time of 10 seconds. Critics note that this engine is noisy under heavy acceleration. The Sentra earns points with reviewers for its well-matched powertrain. The 1.8-liter engine and XTronic CVT transmission work well together, even with the lack of acceleration and power.

Sentra models with the upgraded 1.6-liter engine have 188 horsepower and stiffer suspension components. Reviewers note that the difference between the Sentra’s two engines is not dramatic, but that cars with the more powerful engine are noticeably quicker. The standard Sentra models are noted as being smooth and comfortable on longer trips, with the ability to soak up all but the worst of road imperfections. The Sentra SR Turbo and Sentra NISMO are noted as having a comfortable but busier ride, thanks to their stiffer suspensions and sharper steering.

The Sentra’s tall profile contributes to body roll during hard cornering and sharp turns, but critics note its steering as being accurate. Reviewers liked the even steering weight at most speeds, which is how easily the steering wheel can be turned. Many vehicles have heavier (harder) steering at low speeds and lighter (easier) driving at high speeds, but the Sentra maintains predictable steering feel across the board.

The Sentra is considered to be a very fuel-efficient vehicle, but it isn’t the best in its class. With the base 1.8-liter four-cylinder engine and manual transmission, the Altima has EPA-estimated fuel economy ratings of 27/35/30 city/highway/combined mpg. The automatic transmission changes those numbers to 29/37/32 mpg.

With the 1.6-liter four-cylinder engine and manual transmission, the Sentra is rated at 25/31/27 mpg city/highway/combined. With an automatic transmission, those numbers change to 25/30/27 mpg.

These fuel economy numbers are average for the segment. Critics note that the Sentra easily exceeds its advertised fuel consumption ratings, but that many competitors do better. Some of the difference is due in part to the Sentra’s size, but the Chevrolet Cruze is rated at 28 mpg city and 48 mpg highway and is of similar proportions.

The Sentra is considered to be a good value for a compact sedan, especially in its lower trim levels. The Sentra S is competitive against vehicles like the Toyota Corolla and Honda Civic, but the other cars include more standard features for a slightly higher price. The Sentra undercuts rivals like the Honda Civic and Toyota Corolla by nearly $1,000, but the other two cars have been more recently overhauled and include more modern interiors.

Reviewers note that Sentra models with the upgraded 1.6-liter engine are more fun to drive and are more desirable overall because of their standard features, but that the pricing is too high when compared against the Sentra’s rivals.

The S trim has an MSRP that starts at $18,785 including an $895 destination charge, and has a 1.8-liter inline four-cylinder engine that has 124 horsepower and 125 pound-feet of torque, a six-speed manual transmission, automatic halogen headlights, cloth upholstery, air conditioning, manual seat adjustments, a 7-inch touchscreen infotainment system, keyless entry, cruise control, power windows/door locks, and a rearview monitor. Upgrading to an automatic transmission increases the total price to $19,475.

The SR trim has an MSRP that starts at $21,585 including destination, and adds 17-inch wheels, projector LED headlights, heated outside mirrors, premium sport cloth seats, and intelligent cruise control.

The Sentra SR Turbo has an MSRP that starts at $23,565 including destination and has a 1.6-liter turbocharged four-cylinder engine with Direct Injection Gasoline (DIGÔ) that delivers 188 horsepower.

The Sentra NISMO has an MSRP that starts at $26,835 and includes distinctive NISMO exterior bodywork, upgraded 18-inch wheels, an Alcantara-wrapped steering wheel, and red interior accents.

Nissan offers a variety of packages that are available based on trim level. The Appearance Package is available for the Sentra S and includes 16-inch alloy wheels and a rear spoiler.

The All-Weather Package is available for the Sentra SV and includes heated front seats and heated outside mirrors.