Beginning with the 2019 Ram 1500, Dodge introduced an optional multifunction tailgate that provides a distinct way to access cargo. While similar to multifunction tailgates such as GMC's MultiPro tailgate or Honda's drop-or-swing tailgate, Dodge's design is unique. The barn door style tailgate, which became available at dealerships in the second quarter of 2019, is available on all seven models of the 2019 Ram 1500. For even greater access, the tailgate can be opened with the key fob remote, perfect for loading up when your hands are full.

The tailgate is split 60-40 and opens similar to French doors from sturdy side hinges located at the exterior of the bed. This configuration allows quick access for loading or removing small items by opening a single side of the tailgate. This ensures you can reach items without having to reach over the folded down gate. With an opening radius of 88 degrees, each door provides clear access to the bed. 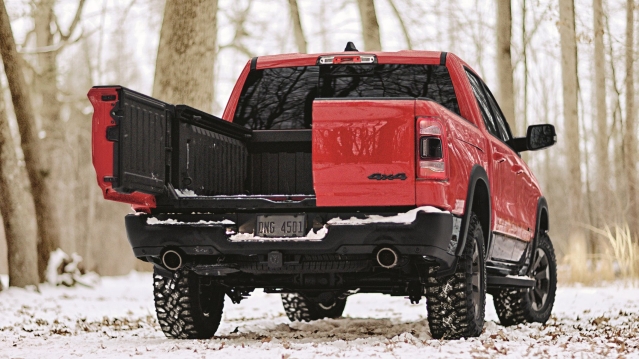 Opening both sides allows closer access to the bed than traditional fold-down tailgates. This is perfect for loading heavy and bulky goods by hand. It also allows forklifts to place items directly on the flat bed rather than partially on the lowered tailgate. In addition to opening from the side hinges, this multifunction tailgate can be opened in the classic fold-down configuration. This creates four total configurations for accessing the bed: fold-down the entire tailgate, open the left door, open the right door or open both doors. Thankfully, the increased versatility does not diminish the strength of the tailgate. When used as a drop-down tailgate, it has a load rating of 2,000 pounds. The multifunction tailgate comes with a spray-in bedliner it can stand up to loading items over the tailgate, as well as shifting cargo while the truck is in motion. 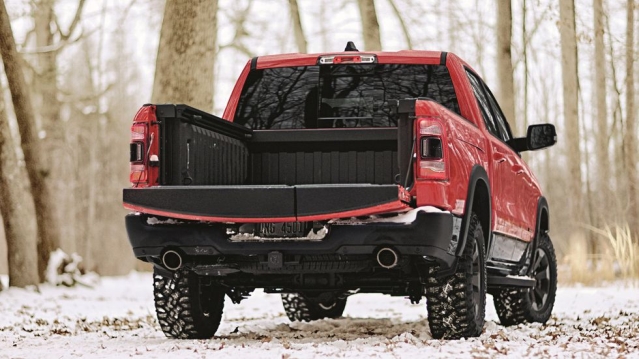 When loading the bed by hand, the side-hinged tailgate provides convenient access to the bed via an optional retractable center step. The sturdy step folds effortlessly out of the way beneath the bumper when not in use. The 60-40 split door also allows you to open the tailgate while tow gear is attached to the truck. This differs from some other manufacturer's swing-open tailgate designs, which feature a hinges on only one side of the tailgate. The ability to access the bed while tow gear is attached makes it even more convenient for you to take full advantage of the 1500's powerful towing capacity. As it is offset to the left, the optional step can also be lowered and raised when the tow hitch is attached. 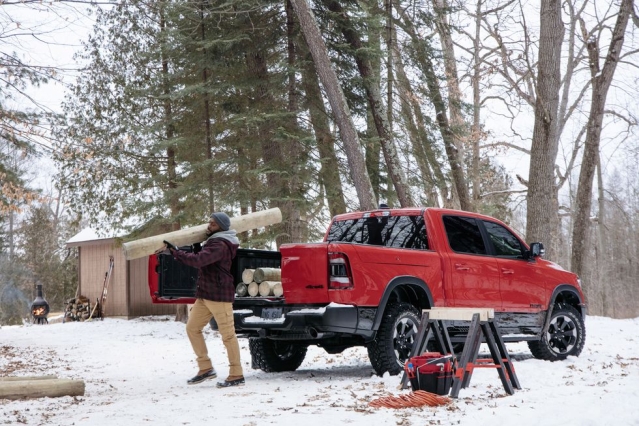 The Ram's 60-40 tailgate split is also perfect for transporting long, narrow loads, such as lumber or piping. Either side of the tailgate can be opened individually and secured in the open position. This allows you to secure the load while leaving part of the tailgate in the up position to protect other items loaded in the truck bed. This is especially useful when paired with some of Dodge's other optional utility features for the Ram 1500, such as the bed divider. This divider makes it easier to carry different types of cargo on each side of the bed. Paired with the individually opening barn doors, you can then access different items without disturbing the load on the other side of the bed. 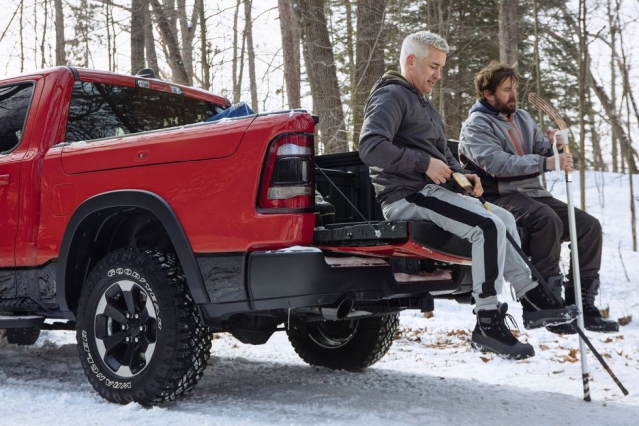 The multifunction tailgate is also designed to work with other utility features on the 2019 Ram 1500, such as the RamBox cargo management system. This system features lockable storage bins that are built in to the bed rails to help organize your load, store tools or transport smaller items. Drainable, weatherproof and illuminated, these bins also feature an outlet for powering tools in the truck's bed. Accessing these storage bins is made easier with the side-hinged doors. The doors also make running a power cord from the 115-volt, 400-watt outlet in the storage bins more convenient than routing over the side of the bed or over the fully lowered tailgate. 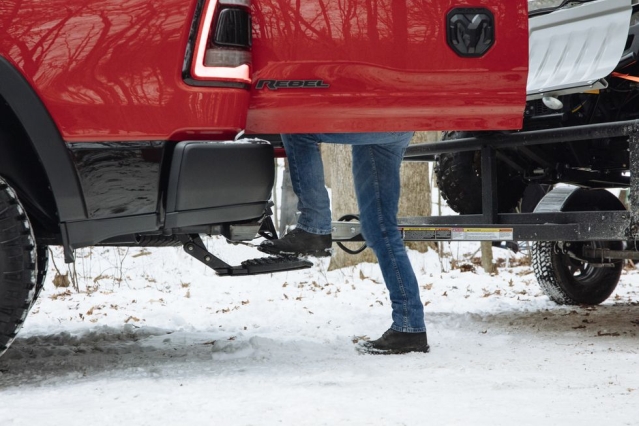 The tailgate is an integral part of the Ram 1500's move to versatile storage and passenger space throughout the vehicle. This includes an optional two-foot bed extender, which increases the already spacious cargo space. The extender pairs with a cargo rails system with four adjustable sliding cleats that make it easier to slide items to the edge of the bed. The interior of Ram 1500 models also have 151 liters of interior storage capacity. This includes a center console that has 12 different configurations so you can create the most efficient storage area for your tools, electronics and other gear.

Beyond storage space, Ram 1500 models have a second row of seats that recline up to eight degrees, creating a more comfortable environment for all passengers. Under the hood, the eTorque mild hybrid system helps improve fuel efficiency, especially when paired with the relatively light weight of the Ram 1500 compared to previous models. High-strength steels allow the truck to have greater durability and a safe design while weighing in at 225 pounds less. The highest quality materials are used throughout the vehicle, including the bed, hinges and tailgate, to ensure durability and long-term use in any environment.

The new tailgate design is an effective example of how mechanical engineering improvements are as important to the design of a modern vehicle as state-of-the-art technology. The Dodge Ram 1500 has plenty of technology as well, such as a 12-inch touchscreen interface, satellite radio and other smart features under the hood and in the cabin. The vehicle also feature real wood and leather for a touch of elegance to complement the focus on functional power found throughout the design. While the multifunction tailgate is one of the more utilitarian features of the 2019 Ram 1500, its ability to provide versatile access to cargo space, including when a trailer is attached, delivers greater owner customization. This brings truck owners one step closer to a fully versatile vehicle that allows them to optimize their truck for the tasks they need it for most, whether that's hauling a ton of bricks, towing a boat or simply stocking up at the grocery store.