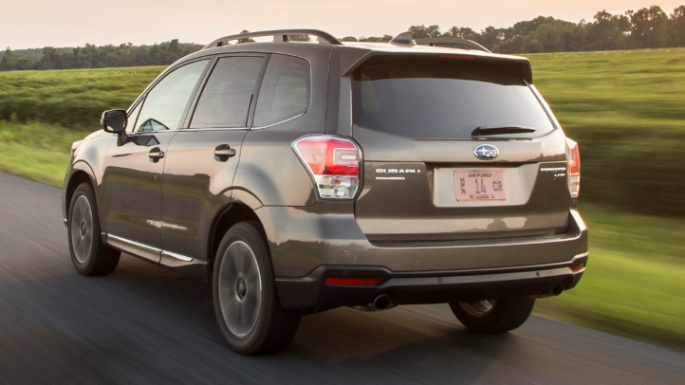 The Subaru Forester is a compact crossover SUV, which provides superb interior space, outward visibility, and standard all-wheel-drive. It's consistently ranked at the top of the class alongside top sellers like the Toyota RAV4 and Honda CR-V. With its standard all-wheel-drive, the Subaru is a better choice for winter driving or light off-roading than nearly any other small SUV in its class, with the notable exception of the Jeep Cherokee and its low-range 4WD.

The Forester has a straightforward clean design, inside and out. It's built to handle harsh weather, with durable fabrics and hard plastics throughout the cabin. It comes with many standard features, and Subaru's EyeSight suite of driver safety technology is available.

Some shoppers will perceive the Forester's interior styling as bland compared to rival SUVs, and its fuel economy is average. But as a comfortable and practical family carrier, the Forester excels. Its rugged design means it can meet the demands of busy and active families, and the large cargo area will swallow all of their stuff. The Subaru handles securely, though acceleration with the base engine is mediocre. A 250-horsepower turbocharged engine comes standard on the 2.0XT Premium and 2.0XT Touring trims, but unfortunately, it cannot be paired with the small engine's 6-speed manual transmission. Nonetheless, it offers superb acceleration, and it has a sport-tuned suspension that improves cornering. That engine combined with the standard AWD system means the Subaru is a lot of fun to drive for a small SUV.

Changes for the 2017 model year Subaru Forester include a new front bumper, headlights, grille, and LED taillights. The steering wheel has also been redesigned. The Premium trim gets a body-color spoiler and power liftgate. A heated steering wheel, keyless entry, and ignition are standard on the 2.5i Touring trim. Lane-keep assist is available on some models with the optional EyeSight package, and the color cameras that run that system have been improved.

Competitors to the Subaru Forester include the Honda CR-V, Volkswagen Tiguan, Kia Sportage, Mazda CX-5, Ford Escape, Toyota RAV4, Jeep Cherokee, and Chevrolet Equinox. Shoppers who live in snowy parts of the country will appreciate the Forester's safety tech, all-wheel-drive, and rugged build quality. It's also an excellent choice for families, those wanting something straightforward, and buyers seeking an adventure companion. 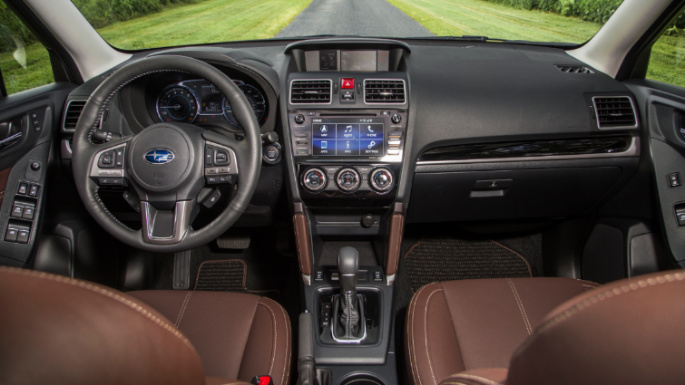 The Insurance Institute for Highway Safety awarded the 2017 Forester with its highest award, the 'Top Safety Pick Plus' designation. This award only applied to Forester Limited and Forester Touring trims equipped with EyeSight Driver Assist Technology and automatic high beams. The Toyota RAV4 and Honda CR-V also won this award. Like those SUVs, the Forester received a 'Good,' the best available score, in most crash-test categories. The one crash test where it did not get that top score was in the IIHS's small overlap front passenger-side test. The Forester scored a 'Marginal,' while the RAV4 did worse ('Poor'), and the CR-V landed another 'Good.'

The National Highway Traffic Safety Administration gave the Forester an overall five out of five stars in its crash tests. It received four stars in the frontal barrier crash test and five stars in the side crash test. The RAV4 and CR-V received overall scores of five as well, while the Mazda CX-5 scored a four.
The Subaru Forester comes standard with all-wheel-drive, traction control, stability control, front-side airbags, curtain airbags for both rows, and knee airbags.

A suite of driver safety features called EyeSight is offered on all but the base Forester and manual-equipped variants. The standard and available safety equipment vary somewhat between trims. EyeSight is available with the Forester Premium for about $1,695, and it includes adaptive cruise control, low-speed automatic emergency braking, lane-departure warning, lane-keep assist, blind-spot detection, rear cross-traffic alert, and steering responsive fog lights. The Forester Limited and Forester Touring trims get standard blind-spot monitoring and rear cross-traffic alert. The Limited's optional EyeSight features are only available in a package with navigation and premium audio equipment, and it costs about $2,945. Those features include automatic high beams and reverse automatic braking. The Touring also pairs the above EyeSight features with a navigation system, and that package costs $1,595. 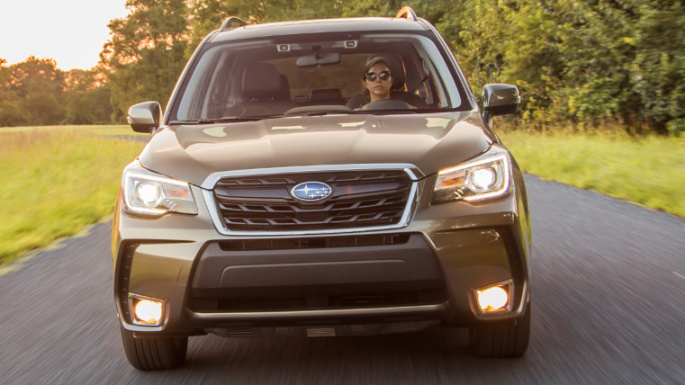 The Subaru Forester is a great value. It comes with comparable standard features to competitors, plenty of interior and cargo space, and a reputation for reliability. Subarus also tend to keep their value well, with better depreciation than almost any other small SUV. The RAV4 and CR-V have also been known to hold their value well. The Forester comes with something that doesn't come standard on rivals: all-wheel-drive. Having AWD included saves shoppers hundreds, if not thousands of dollars.

The Forester has a lower starting price than base models from Toyota, Honda, or Mazda, by $1,000-2,000. The Subaru's availability with a 6-speed manual also makes it special, giving buyers the choice of how they want to drive their vehicle.

The Subaru's durable build quality, excellent track record for reliability, and low depreciation mean drivers will likely get years of use out of the vehicle with few issues. Fuel economy isn't as good as rivals, and that extra expense on refueling will eat into the savings over time somewhat. But overall, the Subaru is one of the best values in its class. 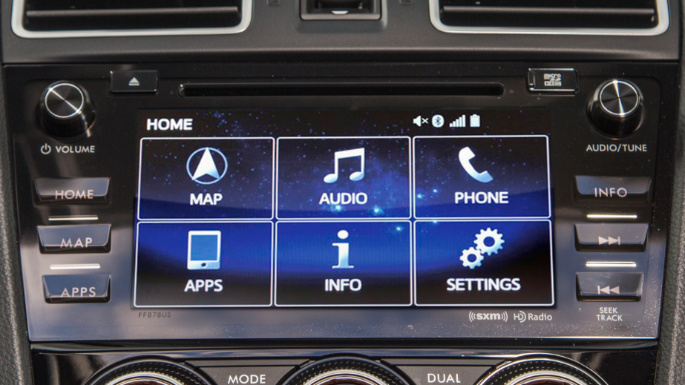 Thanks to the way Subaru designs their cars and SUVs, the Forester's tech features are easy to access and manage. Subaru employs large buttons, and screens are bright and quick to respond. The base 2.5i trim comes with a CD player, HD Radio, four speakers, an AM/FM tuner, an aux input, Bluetooth, a 6.2-inch infotainment touchscreen, and a USB port. 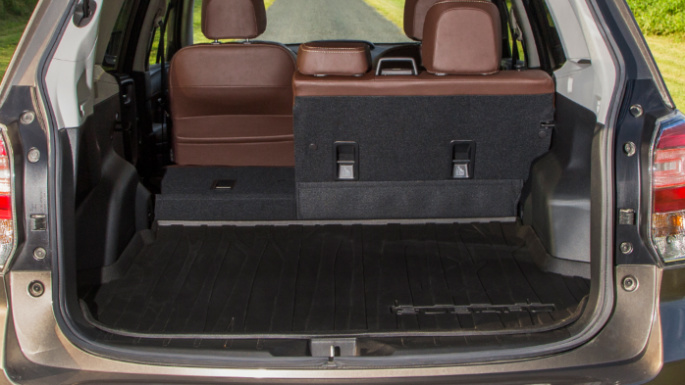 Spacious and user-friendly, the Forester is very practical. It has one of the largest cargo areas in its class at 34.4 cubic feet. A power liftgate comes on the Forester 2.5i Premium trim level and above, making opening and closing the trunk less of a chore. The liftgate opening is large, thanks to the Forester's boxy style, and fitting large cargo inside is a cinch. The back seats can be folded to expand the cargo area to 74.7 cubic feet. Other small SUVs like the Toyota RAV4 and Honda CR-V have similarly spacious cargo areas, while the Mazda CX-5 and Chevy Equinox have less space. The Volkswagen Tiguan is near the bottom of the group in this respect.

The Subaru also has plenty of storage in the cabin, with large cup holders in both rows and door bins. Everything in the Forester feels pleasantly chunky, and this works to its benefit with cargo space. 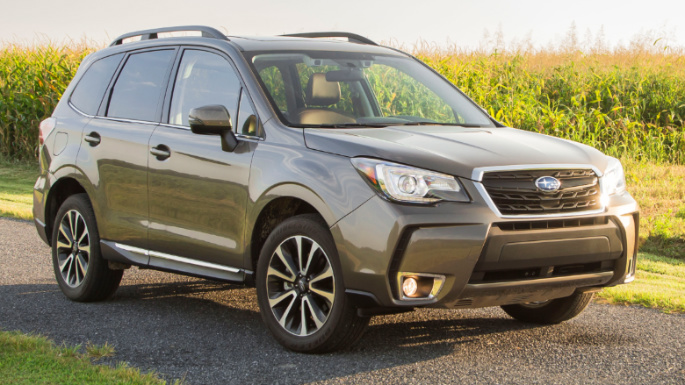 Of all of the SUVs in its class, the Subaru Forester may be the most functional in its design, prioritizing usability over styling. This devotion to practicality and usefulness is itself a style, and many shoppers have become loyal Subaru buyers partly due to this funky and unique aspect of the brand's vehicles.
The interior is designed very well, with controls and buttons that are easy to reach and simple to use. Shoppers in colder climates will appreciate the uncluttered and hefty buttons, which one can press while wearing gloves. The rest of the interior is made of rigid materials that look incredibly durable. The plastics used in the doors and near the floor are hard and sturdy.

The Forester's seats are comfortable, with an upright position that makes one feel like they are driving an SUV and not a car. The Forester is renowned for its superb headroom, and this sense of roominess is a very nice addition to the cabin. Outward visibility is perhaps the best in its class due to the Subaru's raked windshield, tall windows, and thin side pillars. Despite all of the height and airiness, the Forester is no taller on the outside than its main rivals.

The ride height is amongst the best in the segment, with 8.7-inches of ground clearance. This, coupled with the all-wheel-drive, makes the Forester an excellent vehicle for overcoming difficult road conditions.
The fit and finish are very good. All of the Forester's panels feel well put together.

Some rivals like the Toyota RAV4 and Mazda CX-5 offer sportier driving experiences than the Subaru, while the Honda CR-V and Chevrolet Equinox are better options for comfort. The Subaru fits somewhere in between, nicely balancing car-like handling with a quiet ride. It has a 34.8-foot turning diameter, meaning the Forester is more maneuverable than the SUVs mentioned above and tied with the RAV4. Coupled with the excellent outward visibility, it makes parking and getting around in the city a breeze.

The Forester 2.0XT variants get the 250-horsepower four-cylinder engine, and it fundamentally changes the driving experience. Similar to the motor in the Subaru WRX sports sedan, the Forester's turbo engine is quick to accelerate, and it offers plenty of highway passing power. The continuously variable transmission includes paddle shifters. The 2.0XTs also get a sport-tuned suspension, and something Subaru calls Torque Vectoring, which also made its debut on the WRX. That tech helps send power to the wheels that need it most, and the end product is an SUV that is very fun to drive and agile in corners.

The Forester 2.0XT models also come with X-Mode, which allows drivers to select between different on- and off-road modes. 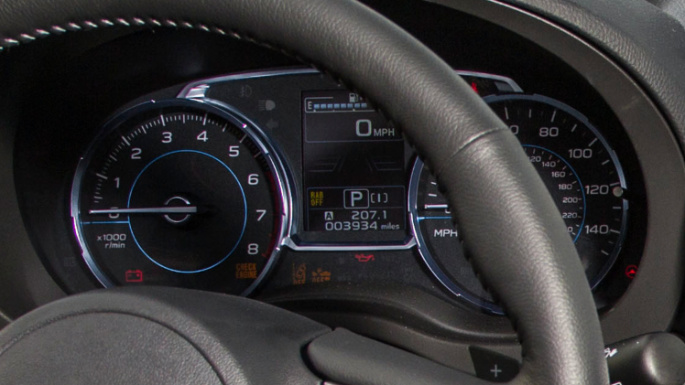 Fuel economy for the base engine is average for the segment, with an EPA-estimated 28 mpg combined. With the manual transmission, that number dips to 24 mpg. Variants equipped with the more powerful engine still get 25 mpg, which is adequate considering the included driving performance.

Unlike rivals like the RAV4, there is no hybrid powertrain available for the Forester. That hurts its versatility as a daily driver. 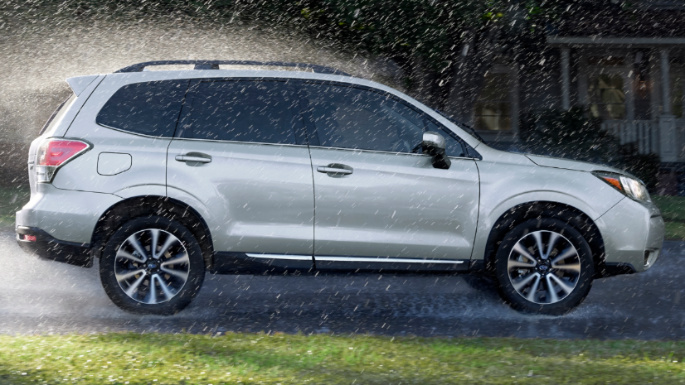 The Subaru Forester comes in four trim levels: Base, Premium, Limited, and Touring.

The Premium retails for $26,370. It adds heated side mirrors, a panoramic sunroof, a power liftgate, alloy wheels, a 10-way power driver's seat, heated front seats, automatic climate control, satellite radio, and a seven-inch touchscreen. For $30,170, shoppers can get the 2.0XT Premium, with its larger engine, 18-inch wheels, and sporty suspension.

The Touring models have an MSRP of $32,170, including destination, and it gets keyless ignition, a heated steering wheel, driver's seat memory, dual-zone climate control and a Harman Kardon audio system. The Forester 2.0XT Touring retails for $35,170.

If we had to choose, we would probably spring for the Forester 2.0XT Premium. It includes most of the comfort features we are looking for in a small SUV, like heated seats, a power liftgate, and automatic climate control. Plus, it has the added horsepower and sportier suspension. The 2.0XT trims make the Forester much more fun to drive without a tremendous impact to fuel efficiency. All that for about $30,000 sounds like a deal.