The Subaru WRX is a compact performance car, aimed at driving enthusiasts who want a little bit of practicality.

It competes with the likes of the Volkswagen Golf GTI and Golf R, VW Jetta GLI, Honda Civic Si, Honda Civic Type R and Hyundai Veloster N. All of those are more sporting derivatives of compact cars, and the WRX shares a lot of pieces with the previous generation Subaru Impreza sedan.

While the current model was introduced for 2015, features for the 2019 model year Subaru WRX include a limited edition Gray.Series model, an additional five horsepower for STI trims, an upgraded infotainment system and other safety features available across more trim levels.

The Subaru WRX has always stood out as one of a kind. There are few all-wheel-drive sedans on the market for less than $50,000 that are purpose-built to provide a performance-oriented driving experience.

The WRX is still a Subaru though, and with that, its buyers get all the safety and practicality that Subaru has traditionally provided in their vehicles. The WRX still stands out as an anomaly amongst its peers, offering better performance than most while not being uncomfortable or fussy during the most mundane of daily commutes.

It is low to the ground with its tuned suspension and large wheels separating it from the regular Impreza models. Even the base model has a functional hood scoop, quad exhaust tips, a trunk lid spoiler, and 17-inch wheels. 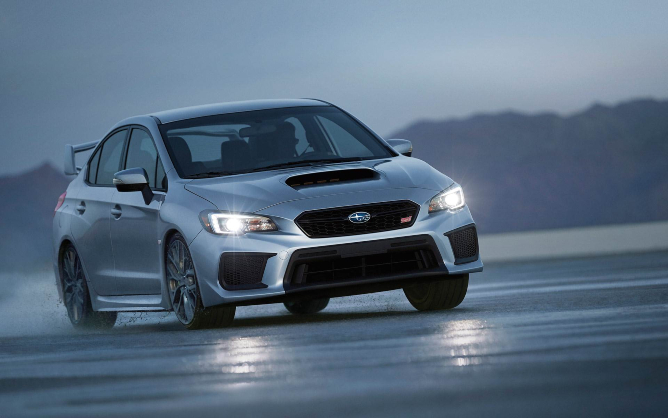 Upgrading to the STI variants sets the WRX apart even further with the addition of a large rear wing, colored Brembo brake calipers, an even lower suspension, and 19-inch wheels.

Apart from the functional performance features, the WRX still looks like it means business. The relatively sharp front fascia features black grille openings and handsome headlights that don't quite make it look angry, but rather purposeful, and ready for some serious driving.

The WRX's styling may be a little boring for some, but its upright roof and windows at least make for a practical interior and better visibility than some coupe-like models. The rear of the WRX is short and verges on being stubby would it not be for the subtle trunk spoiler on the vehicle. Some models get a large, rally-inspired spoiler on the trunk lid to draw attention to the vehicle. 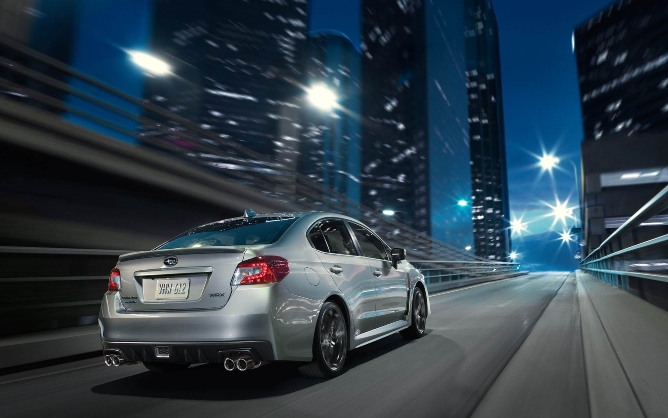 Interior quality and comfort are noted to be generally good by the WRX's reviewers. Materials are stated to be good but not overly luxurious or high-end. Everything is well made with a lack of loose panels or rattling over bumps, though reviewers observe that rivals from Honda and VW are better appointed inside.

Seating comfort is also a high point, according to reviewers. The seats are noted to be well bolstered, and legroom is surprisingly good for the size of the WRX, while headroom is not overly tight. Reviewers state that even larger adults can sit comfortably in the rear seats with an adult driver in an uncompromised seating position.

The WRX has good ergonomics according to its testers, with most controls being easily reachable, simple to use and pleasant to the touch. 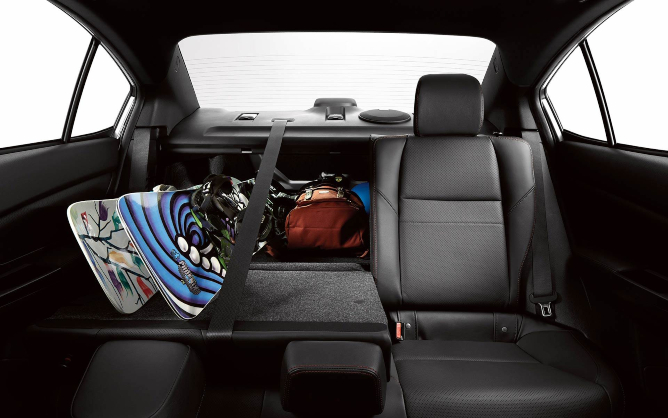 Ride quality is observed to be predictably rough for a performance car, especially in the STI model with its firmer suspension. Road noise is universally noted to be one of the low points of the WRX line, revealing its economy roots. Even performance-tuned rivals are better in this regard.

Utility and practicality are both respectable for the WRX's size. Despite some hatchback rivals, the WRX still offers 12 cubic feet of cargo space with folding rear seats. That is average compared to other sedans in the class, but it again falls short of the more flexible competitors with hatch options. Interior storage is adequate, but not overwhelming, with multiple cupholders and storage pockets. 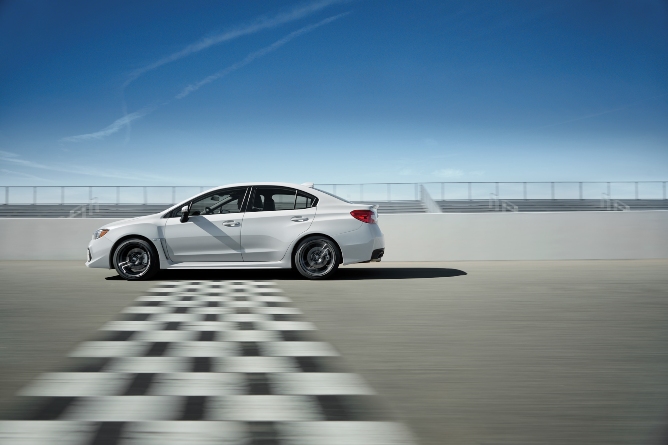 Subaru's standard all-wheel-drive system is still a rarity in this price class. Despite its low ground clearance, the WRX is supremely capable in just about every environment. It won't be able to climb rocks like an SUV, but its rally racing heritage proves that mud, snow and wet conditions. But it's likely better able to keep the car moving quickly through the corners on a track, where front-wheel-drive cars would probably spin their wheels trying to handle a lot of power.

Subaru's StarLink infotainment system, with standard Apple CarPlay and Android Auto, helps the WRX keep up with the competition. A standard 6.5-inch touchscreen display comes with satellite radio, Bluetooth and a 6-speaker audio system that is reported to be underwhelming by reviewers. 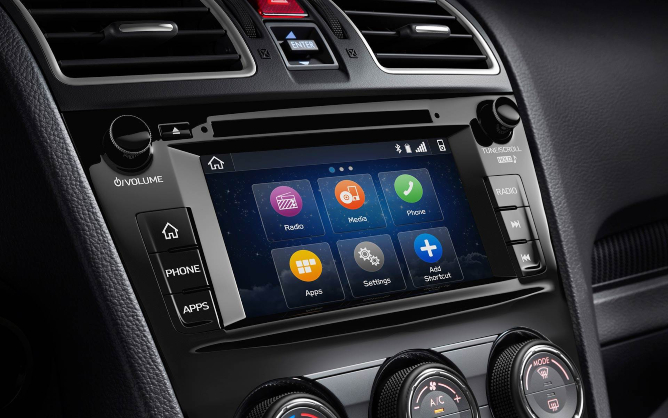 An upgraded StarLink system with a 7-inch touchscreen is optional, in addition to a 9-speaker Harman Kardon stereo system and navigation system. Automatic climate controls, hill start assist and LED high and low beam headlights round out the notable technology features available on WRX.

The 2019 WRX stands out among its peers with its strong crash test ratings.

The WRX earns the highest honors from the IIHS with a Top Safety Pick Plus rating. Standard safety equipment on all WRX models includes traction control, electronic stability control, a rearview camera, and brake assist.

A wide array of safety features are available, but unfortunately, many of these features aren't optional on the base WRX and are only offered on higher WRX trims when paired with the automatic transmission option.

Blind-spot monitoring, rear cross-traffic alert, and StarLink Safety and Security, which include services like theft recovery, roadside assistance, and remote diagnostics, can be added as options. LATCH child safety seat anchors for the rear seats are standard.

The Subaru WRX and WRX STI are both built to provide the best driving experience for those who want performance. All engine options are noted to provide best in class performance with nearly unrivaled horsepower numbers for the class.

Spirited driving is aided by superior handling capabilities, according to reviewers. The tuned suspension on the WRX and even stiffer suspension on the WRX STI provides testers with best in class handling around corners. Most reviewers note that, even though the suspension stiffness makes for a rough ride, many of the WRX's buyers will be willing to sacrifice comfort for performance. Steering is tight and responsive while the clutch in manual transmission cars is heavy and can be tiring, according to testers.

Braking is noted to be slightly underwhelming by reviewers with merely adequate pedal feel. Adding to the overall driving experience is the pleasant burble of the "boxer" engine, according to testers. A tuned exhaust is available as a dealer option for the WRX for an even more prominent exhaust note.

Fuel economy is where the WRX suffers the most compared with others in its class. It trails performance competitors like the Honda Civic Type R and Golf GTI by a significant margin, partly because of the standard all-wheel-drive.

The WRX receives an EPA-estimated 21 miles per gallon in the city and 27 mpg highway when equipped with the manual transmission. The automatic falls behind even more, at 18 city and 24 highway. The more powerful STI returns an EPA-estimated 17 mpg in city driving and up to 22 mpg on the highway.

The Golf GTI, with its 2.0-liter turbocharged 4-cylinder engine, returns an EPA estimated 24 and 32 mpg in city and highway driving, respectively. A Civic Type R, with 306 horsepower, gets an EPA-estimated 22 city and 28 highway, which still bests the WRX by a combined one mile per gallon.

The Subaru WRX presents various value propositions depending on its buyer.

If high performance is a top priority, the WRX is unrivaled. Those who value sports car handling will understand that a stiff suspension is a fair tradeoff for cornering capability and spirited driving experience.

Additionally, Subaru's excellent all-wheel-drive system helps put the power to the pavement or the dirt. Both engines are supremely capable and provide brisk enough acceleration for a performance vehicle, let alone a daily commuter.

The WRX will not present a good value if the latest technology, safety equipment, ride comfort, and gas mileage are top priorities.

Fuel efficiency is at the bottom of the class. The sport-tuned suspension offers a harsh ride despite the seats reportedly being very comfortable. Standard safety equipment, which is standard on many other vehicles, is only optional on the WRX, and technology is just average.

The Subaru WRX is available in five different trim options:

The standard WRX model comes standard with the 2.0-liter turbocharged 4-cylinder engine and starts at around $28,000 with destination fee included. A 6-speed manual transmission is the only transmission on this version.

The WRX Premium starts at around $30,400 with destination included. The manual transmission is standard, but a CVT automatic transmission is optional for an additional $1,900.

Manual transmission cars can be equipped with the Performance Package which includes Recaro seats, and larger brake pads and calipers. The sunroof is removed if this package is selected. Also available on the Premium is the Series.Gray package. With it comes blacked-out 18-inch wheels, LED headlights and foglights and a special gray paint scheme, from which it gets its name.

The Limited trim starts at just under $32,700 with destination included, and the automatic transmission is available for an additional $1,900.

The Limited comes standard with the painted, larger brakes offered on the Premium Series.Gray sub-trim, and adds leather upholstery, power driver's seat, push-button start and navigation. A 9-speaker Harman Kardon stereo system and upgraded StarLink infotainment system are both options for the Limited.

The Subaru WRX STI comes with the larger 2.5-liter turbo engine, comes only with a manual transmission, and starts at $37,500 with destination charge included.

Recaro sports seats, push-button start and a power adjustable driver's seat are optional. The Series.Gray sub-trim is also optional with everything from the WRX Premium and the addition of Bilstein dampers for even more improved handling.

The WRX STI Limited is the highest trim option available on the WRX STI and starts at $42,280. The STI Limited comes standard with every feature on each trim below it with the opportunity to replace the large rear wing with a smaller lip spoiler at no extra cost.