The 2019 Toyota 4Runner is a midsize SUV that has hung around for a decade now without a major facelift or any significant upgrade. It is currently in its fifth generation.

Toyota did add the Nightshade Edition to the 4Runner lineup for the 2019 model year, which is essentially nothing more than a trim package replaces chrome-colored pieces on the SUV’s exterior with black ones.

For some, this lack of updates is a good thing. Practicality and simplicity are a top priority, both of which contribute to the 4Runner’s rugged and durable reputation as well as Toyota’s continued tradition of making vehicles that last.

For those who want the latest in comfort, technology, and styling, you will be disappointed. The body-on-frame design, along with the aging engine and transmission are much different than most SUVs today. The Honda Pilot, Nissan Pathfinder, Ford Explorer, Jeep Grand Cherokee, Dodge Durango, Subaru Ascent, Mazda CX-9, and Volkswagen Atlas, are all primary competitors to the 4Runner. And all offer better technology, safety features, and fuel efficiency.

The 4Runner is very much a blend of its close SUV sibling, the Highlander, and its cousin, the Tacoma pickup truck.

With SUVs selling as well as they do, the 4Runner is a great alternative to a new car or pickup truck. It won’t offer the latest and greatest of just about anything, but it does offer a familiarity that appeals to many buyers looking for a good, solid family vehicle. 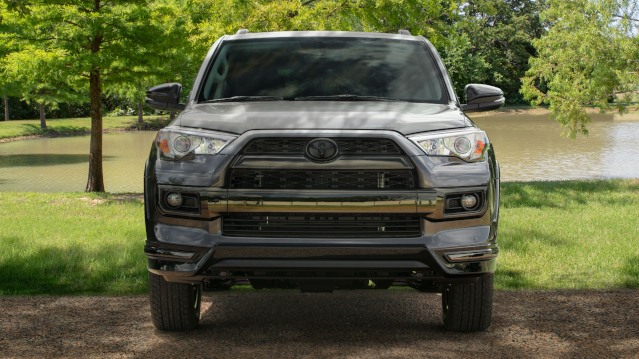 The 2019 4Runner is one of the boxier SUVs you can buy. It is masculine and aggressive in its appearance which is indicative of its true intentions. Competitors like the Honda Pilot, Mazda CX-9, and Nissan Pathfinder have a sportier, more stylish look, and can’t compete with the 4Runner’s ground clearance and presence.

Its squared appearance makes it look larger than it is, but it also gives the impression that it might be a bit more top-heavy than other SUVs with a more modern design. Though not something that should put buyers off, it does give a more truck-focused impression than other SUVs in its class.

Large, beefy tires surrounding standard 17-inch wheels continue the trend of a more “old school” appearance. 20-inch wheels are available on the high-end Limited trim which fall more in line with a typical SUV of this size.

Fog lights and a roof rack system adorn the exterior even on the base trim of the 4Runner. Both are welcome features for adventure seekers. 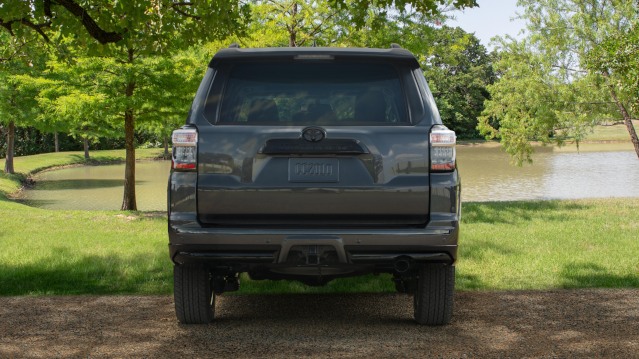 Fit-and-finish is good while quality and comfort are only average for the class. It is easy to see the 4Runner’s aging design as the materials and overall layout are a far cry from the most up-to-date standards of other SUVs.

The largest interior complaint concerns the large amount of plastic and hard surfaces found throughout the cabin. These contribute to the perception of an overall lack of quality. Though wood trim is available on the highest trim level, it is clearly fake. 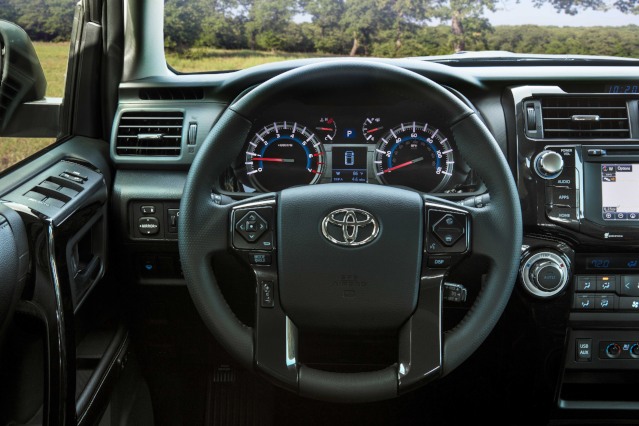 Despite this, quality isn’t actually lacking. All the interior buttons and switches may not be the nicest to touch, but they are large and firm. This is consistent with the masculine feel of the 4Runner, and it should be noted that the ruggedness of the vehicle is felt through the lack of the nicest materials.

Cloth seating and vinyl upholstery are standard, along with a leather-wrapped steering wheel. If you do want leather upholstery, the Limited trim will give you just that.

Apart from the materials, the look and feel of the interior again shows its age. Everything works, and that’s about it. The gauges, climate controls, and switches are consistent with a vehicle that hasn’t been updated in a decade.

The front seats provide a commanding seating position and visibility are two things that do shine from an interior perspective. The 4Runner’s boxy canopy affords a much better view of your surroundings than many other SUVs which have a more sloped roofline.

Practicality and utility are king with the 4Runner. It offers a class-leading 88.8 cubic feet of cargo room. The no frills design make it easy to get things in and out of both the rear cargo deck and rear passenger area. Both offer wide openings which make it easy for family members and children alike to crawl into the back seats. Storage space is also good throughout the vehicle with a large flat cargo area.

The 4Runner does offer a third-row seat option, but like many other midsize SUVs, the third row is reserved mainly for small children or unexpected situations.

What the 4Runner makes up for in storage and cargo space, it lacks in legroom. It lags behind the Honda Pilot, Subaru Ascent, and Nissan Pathfinder when it comes to legroom, especially in the rear seats. An adult can still easily get into and sit in the second row seats, but they may be a bit cramped, especially if they are over six feet tall.

There isn’t much to talk about in terms of either technology or infotainment. 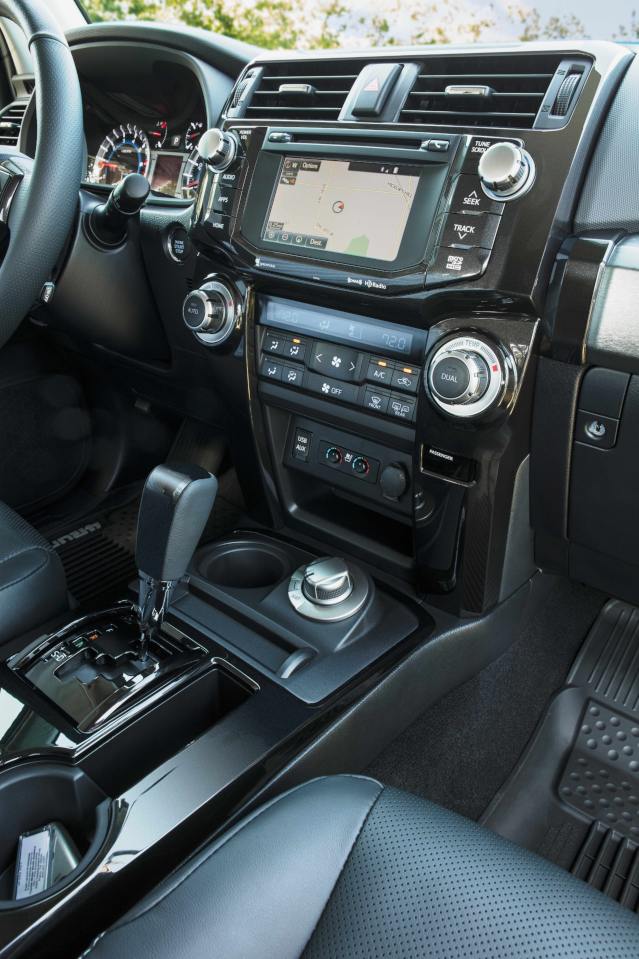 Heated and cooled seats, an optional sunroof, and a JBL audio system cap off the highlights offered in the 4Runner. But the navigation system, lack of digital gauges, and voice controls are lacking, even when compared to other vehicles within Toyota’s own lineup.

Apple CarPlay and Android Auto aren’t available on the 4Runner. Both have become must- haves and are offered in most other competitor’s SUVs. Bluetooth is standard, though in 6.1-inch touchscreen infotainment display is small.

Crash test results are not bad as the 4Runner has a four-star rating from the National Highway Transportation Safety Administration.

The 4Runner’s driving experience is both what you’d expect from a large SUV and from a Toyota product. Just about every aspect solid and nothing more.

Power is ample with all trims powered by a 4.0 liter V6 engine making 270 horsepower and 278 pound feet of torque. Those numbers are average for the class. Despite this, the powertrain is proven if not slightly dated. The naturally aspirated V6 engine has been used for years, and the five-speed automatic transmission works well but isn’t up to the technology standards of other SUVs in the class.

The lack of a turbocharged engine and a continuously variable transmission means that power delivery is smooth and seamless, and acceleration is fairly gutsy for an SUV of this size. A 0-60 mile per hour acceleration time of 7.5 seconds is good for a vehicle of this size and power but won’t awe anybody. For those seeking a traditional driving experience, the 4Runner will provide it.

Braking is likewise average for an SUV. Its size contributes to the lack of overall feel, but the brakes are competent without being sticky or catchy.

Ride comfort is unsurprisingly on the rough side of the spectrum. The 4Runner is more akin to a truck than a modern SUV. Its body-on-frame design contributes to its ruggedness, but the unibody, car-like design of other SUVs have it beat in the comfort department. The TRD off-road trims of the 4Runner don’t help comfort levels by adding a beefier suspension setup for better all-around capability.

The seats in the 4Runner provide ample support and comfort, which do help, but even the most luxurious trim level lags behind competitors in comfort.

Handling is neither abysmal nor stellar. No SUV really handles incredibly well, but the 4Runner is solid and has a planted, firm, and commanding feel. You should still be wary of taking a corner too fast, but that comes with the territory. Overall, it’s better than expected but not on par with the segment’s more sporty offerings.

Fuel efficiency is another area in which the 4Runner falls short.

Its V6 is a great, reliable engine, but its age shows at the gas pump. Many manufacturers are turning to turbocharged, four cylinder engine designs and piston deactivation technology to improve fuel economy. The 4Runner has neither.

The aging transmission doesn’t help out either. With only five speeds, the overall fuel economy is EPA rated at 17 miles per gallon in the city and 21 miles per gallon on the highway. The highway number drops to 20 miles per gallon if you decide to buy the 4Runner with its full-time four-wheel drive system. This rating is at the bottom of the class.

The question of value comes down to what you desire in an SUV.

The Toyota 4Runner is a fantastic value if you are looking for a truly capable SUV that takes utility seriously, if reliability is a must, and if this is the first new SUV you have bought in many years as it feels like a vehicle older than it is.

Its traditional engine, transmission, and overall simplicity will be familiar to you. A lesser known point of value the 4Runner provides is in depreciation. These SUVs hold their value tremendously well, and they are currently in high demand. Prices might be high, but you will not lose much monetary value in all of your years of ownership.

The 4Runner isn’t a good value if the newest technology, the most up-to-date safety features, the most comfortable ride quality, and the best interior materials are your top priorities. It is here the 4Runner falls short of its competition.

The base trim level SR5 MSRP starts at just a fraction under $36,000. For a base trim, the SR5 is well equipped with fog lights, skid plates, cruise control, power seats, alloy wheels, heated mirrors, and a roof rack system. Most of these would be add-ons for many other base model offerings in the segment. Rear-wheel drive is standard while a part-time four-wheel drive, utilizing a transfer case rather than an electronic system, can be added.

The SR5 Premium adds about $1800 to the purchase, bringing the price to about $37,800. A sunroof and leatherette upholstery can be added to any premium level trim. Heated seats can also be added with an upgraded Entune navigation and infotainment touch screen system.

The TRD-Off-Road trim starts at just over $39,000 and adds options that the name would suggest. A locking rear differential, terrain management system, and crawl control for difficult, off-road focused situations are added. Additionally, the trim adds slightly wider tires and a TRD branded interior to assist with the purpose of the package.

The TRD Off-Road Premium trim mixes all the goodies of the Off-Road package with some of the features that would make you right at home on downtown city streets. Leatherette upholstery, heated seats, and a sunroof can be added as options to make you feel more at home under normal driving conditions. This package starts at $41,000.

The TRD Pro trim is designed with the wilderness in mind and competes well with the Jeep Wrangler. All of the TRD Off-Road features are included along with LED fog lights, blacked-out wheels for a more aggressive look, off-road tires, and a revised suspension setup, including a robust damper and Fox spring combination. The TRD Pro has the most expensive starting price at $47,500.

The Limited is the most luxurious of the available trim levels. That also means that the off-road capabilities of the 4Runner are slightly reduced. 20-inch wheels, full-time four-wheel drive, dual zone climate control, leather seats, heated seats, and push-button start are all included. A special comfort-oriented suspension system is also included to make the ride as smooth as possible. Parking sensors are equipped and optional power running boards can be added for even better utility. The Limited starts at about $44,000.

The Nightshade Edition is little more than an appearance package with the Limited trim features being applied. You will want to go with this package if you don’t like chrome or you want a more aggressive look without needed all the off-road features the 4Runner can provide.