The 2020 Toyota Corolla is a compact sedan. Redesigned for 2020, the new Corolla includes a new exterior look along with upgraded interior materials, which provides a more refined feel than previous generations.

The Corolla competes in a highly competitive segment, which includes the Honda Civic, Mazda 3, Hyundai Elantra, Nissan Sentra, Kia Forte, Subaru Impreza, and Volkswagen Jetta. Many of these rivals have recently been redesigned, too.

The Corolla has been a longstanding member of the compact car segment. It has been in the U.S. market since the late 1960s and has offered millions of people reliable, if not bland, transportation. 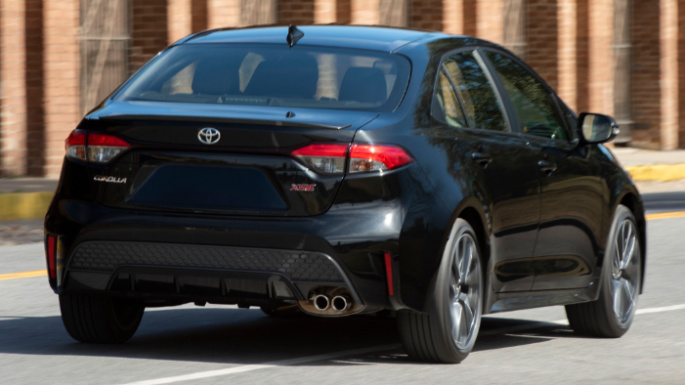 Despite the Corolla's continued record of stellar reliability, experts have agreed that the Corolla has lagged behind many of its rivals when it comes to a premium feel. The compact sedan segment is by no means a luxurious one. Still, competitors like the Mazda 3 and Honda Civic offer much more refined interiors and sharper exterior designs than the norm for the class.

The 2020 Corolla now offers a more premium-feeling interior and stylish exterior to truly compete with other rivals rather than leaning its faithful return buyers and reliability record alone.

In addition to being a sedan, a hybrid Corolla option is available for the first time as well as a hatchback variant, both of which further the Corolla's appeal to buyers. The hatchback came to the market last year, whereas the redesigned sedan and gas-electric hybrid sedan are new for 2020.

TLDR: The Corolla wears an updated exterior with sharper lines and sportier design than previous generations. 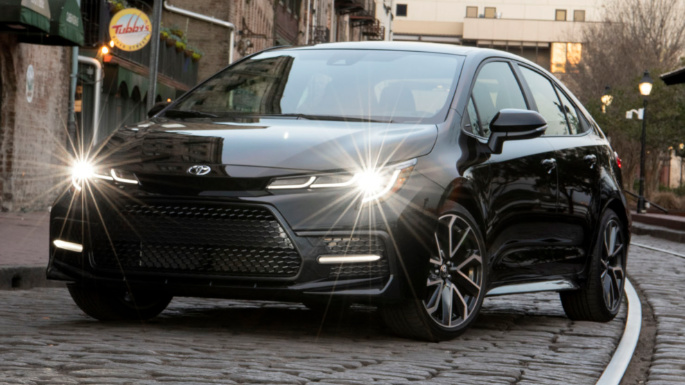 The redesigned Toyota Corolla is much sharper and edgier than its past versions. Though still not the most attractive vehicle on the market or even in its segment, most reviewers agree that it looks sportier and cleaner than it ever has.

From the back, the Corolla is much blander. Its taillights are slimmer than the previous generations and taper to a point around the side of the car. The Corolla's side profile is also somewhat reserved and looks much less sporty than its frontal design would suggest.

It has a long, rounded roofline that tapers gradually into the trunk, which is short and almost stubby. Again, its lack of character lines shows that the Corolla is not as sporty as some of its rivals. The hatchback version has a much sportier overall profile and almost looks fast. Small wheels on lower trim levels and the hybrid sedan also give the Corolla a decidedly budget look.

TLDR: Interior quality is better than in previous generations but still is not up to par with the best-in-class competitors. 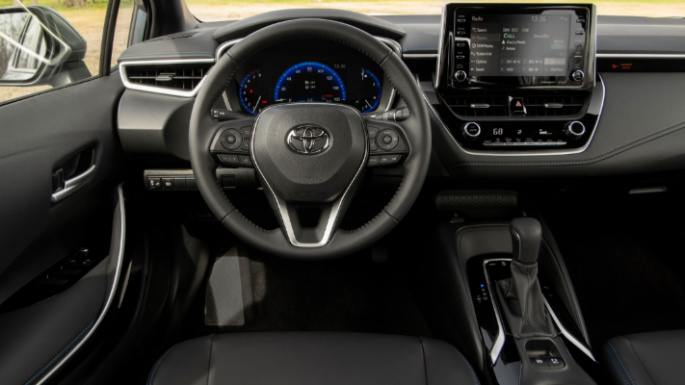 Many reviewers have been pleased with Toyota's efforts to up the Corolla's interior game, as materials have been improved to better compete in the segment. The base model's sub-$20,000 price ensures that a lavish interior is still a distant thought, but it is still considered by many reviewers to be far ahead of the interiors of years past.

Despite having upgraded the quality of interior materials, the Honda Civic and Mazda 3 still outshine the Corolla with better style and overall use of materials, according to reviewers. But the Corolla is still much more simple and pragmatic compared to more stylish or feature-laden rivals.

Seat comfort also falls to the middle of the class, according to reviewers. Many testers have found that rear headroom falls behind rivals because of its sloping roofline. Front-seat legroom is good, and backseat legroom is adequate, but many testers also agree that the seats in lower-trim models aren't as supportive as those found on higher trims. In general, the cabin is reasonably roomy but not quite as spacious as some other rivals. 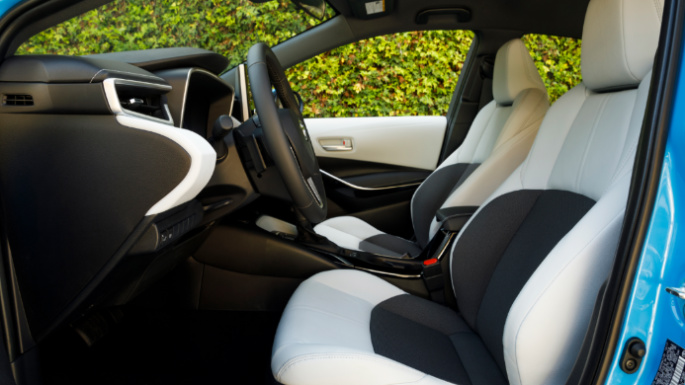 Ride quality is noted by testers to be quite good, and the stiffer suspension offered on sportier trim levels provides a welcome combination of driver engagement and comfort.

The Corolla has been known for offering practicality at an affordable price. It continues this trend despite having a lower than average cargo capacity. But with only around 13 cubic feet of cargo capacity, it falls behind rivals like the Honda Civic, Kia Forte, and Volkswagen Jetta. 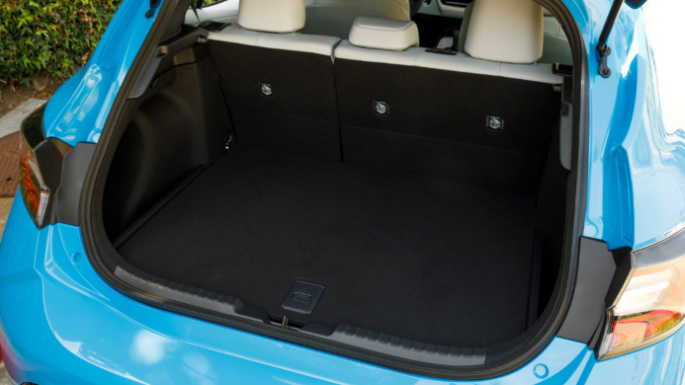 Along with its smaller trunk space, reviewers also note that the trunk hinges protrude into the cargo area, and the rear seats do not fold fully flat. The Corolla Hatchback -- seen above --is tighter than its sedan sibling in the back seat, but it does offer greater maximum cargo capacity.

Cabin ergonomics bring the Corolla's practicality and utility score up a bit as its layout is simplistic and easy to use. Numerous cupholders and cubbies provide adequate space, but testers are much more pleased with the Honda Civic's more spacious interior and abundance of additional storage compartments.

Getting in and out of the Corolla is about what you would expect, given the car's small size. The sloping roofline does provide a more difficult entrance for taller passengers, but the doors open wide, and reviewers of the Corolla did not feel like they had to fall into the seats.

Like most cars in this segment, the Corolla comes only with front-wheel-drive. All-wheel-drive is standard on the Subaru Impreza and is now offered on the Mazda 3.

TLDR: Technology and infotainment offerings are better than before but still fall behind the best-in-class offerings.

With its redesign, Toyota has given the Corolla more standard tech and infotainment features than previous generations. 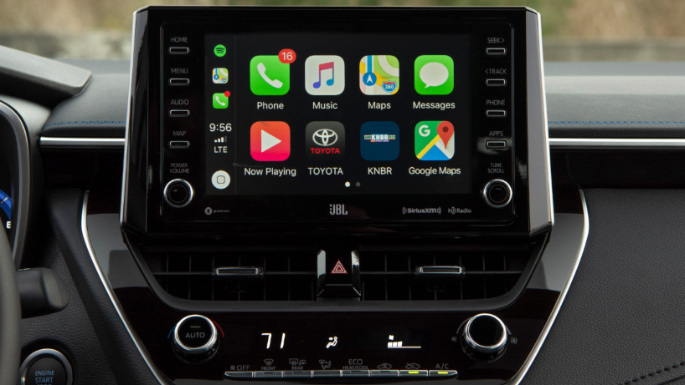 A 7-inch touchscreen infotainment system comes standard along with Apple CarPlay, Amazon Alexa, a Wi-Fi hotspot, a six-speaker stereo system, and Bluetooth. Android Auto is still not available, even as an option, which brings down the Corolla's rating for many reviewers. Reviewers do agree that the infotainment system is easy to use and responsive.

TLDR: Safety and driver assistance features are some of the best in the segment and the industry.

The new Corolla comes with even more standard safety features than the previous generation and has earned an Insurance Institute for Highway Safety (IIHS) Top Safety Pick award for 2020. The National Highway Transportation Safety Administration (NHTSA) has also awarded the new Corolla Sedan with its highest five-star overall safety rating. 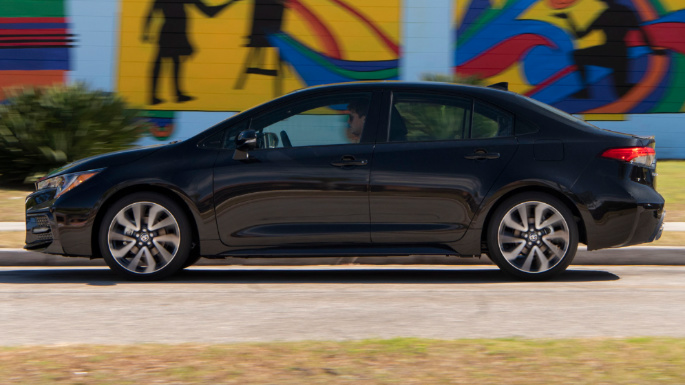 TLDR: The base and upgraded engine options for the Corolla are underwhelming according to reviewers, but it's okay for typical driving.

The 2020 Corolla's updated styling did not carry over into the Corolla's drivetrain options. Many find the engine options to be somewhat sluggish in real-world driving. However, the higher trim levels of the Corolla sedan and hatchback provide a much better overall experience in both power delivery and handling.

The 2020 Toyota Corolla is offered with three different powertrain choices.

The base engine is a 1.8-liter four-cylinder engine that produces 139 horsepower and 126 lb-ft of torque. The higher SE and XSE trim models receive a more powerful 2.0-liter engine, which produces 169 horsepower and 151 lb-ft of torque. These engine options come with a continuously variable transmission with only the SE trim available to be paired with a six-speed manual transmission. SE and XSE trims are offered with the addition of paddle shifters when equipped with the CVT.

The Corolla Hybrid shares its powertrain with the Prius. It is powered by a 1.8-liter four-cylinder engine and electric motor combination that produces a total of 121 horsepower and 105 lb-ft of torque.

Reviewers say that the Mazda 3 and Honda Civic are more fun to drive and offer punchier engines, especially compared to the Corolla's 1.8-liter engine. The SE and XSE trim levels are designed to be the sportier versions of the Corolla sedan, and reviewers are pleasantly surprised at their liveliness around the corners. Still, the Mazda 3 sits well above the Corolla as the performance leader in the segment, according to reviewers.

The Corolla Hybrid produces even less horsepower than the standard 1.8-liter engine by itself, but it redeems itself with far superior fuel economy ratings.

Even the larger engine option seems lacking compared to many of its competitors, according to testers. While all engines handled typical driving situations adequately, most reviewers find the engine options less than ideal when more demanding acceleration is necessary. As with many CVTs, some reviewers find the power delivery to be finicky and inconsistent.

The ride is smooth and compliant and can be surprisingly fun when pushed if equipped with the sportier suspension. It is mostly when abnormal driving conditions present themselves that the Corolla becomes subpar compared to some rivals.

TLDR: Fuel efficiency is near the top of the class, and the addition of a hybrid version only adds better options for the consumer.

Fuel efficiency is one area in which the Corolla shines.

When equipped with the six-speed manual transmission, the Corolla returns 29 mpg in the city and 36 mpg on the highway.

The Honda Civic just edges out the gasoline-powered Corolla when equipped with its 1.5-liter turbocharged engine and CVT with an EPA-estimated 36 MPG overall rating. The Kia Forte, Hyundai Elantra, and Nissan Sentra return very similar fuel economy numbers to the Corolla. 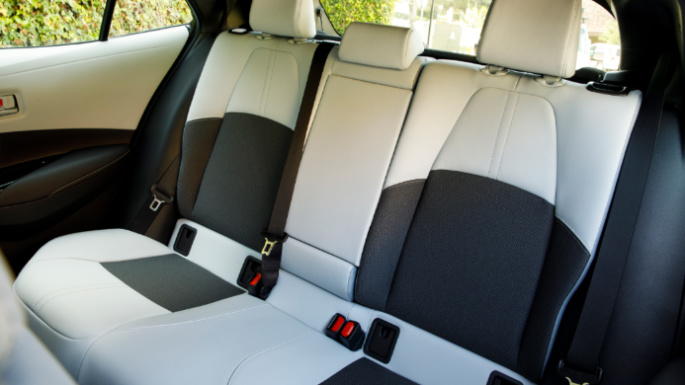 The Toyota Corolla is offered as a four-door sedan, four-door hybrid sedan, or five-door hatchback. The hatchback has different interior dimensions than the sedan, but the gasoline-powered sedan and hybrid sedan are nearly identical, save their powertrains.

The Toyota Corolla is available in five different trim levels:

The Premium package is available on the LE trim and includes a moonroof, alloy wheels, push-button start, and blind-spot monitoring.

The Corolla hybrid is only available in the LE trim and comes standard with front-wheel-drive, a hybrid 1.8-liter engine and electric motor, and a continuously variable transmission. Equipment and features on the hybrid and non-hybrid are mostly the same, but the hybrid variant comes with a higher MSRP of $23,100.

The JBL nine-speaker audio system is optional on the SE and higher trim levels.

The Toyota Corolla XSE is the most expensive trim level available at $26,505, including the destination fee.

The XSE encompasses all the standard features of the XLE and SE and with the addition of the 2.0-liter engine from the SE. Additionally, the sports seats from the SE come standard on the XSE and are power-adjustable.

TLDR: The Toyota Corolla's value has always been good, especially considering its reputation for reliability. That continues in the most recent version of the Toyota Corolla Sedan.

The Toyota Corolla presents prospective buyers with a good overall value. It always has in the past, and even with the 2020 redesign, it still delivers in many different areas. Even though it is not the most engaging, most practical, or even the most spacious compact car on the market, it does enough for most people to remain relevant. Its 2020 redesign enhances its appeal even more. Its adequate interior space, modest materials quality, and useful technology features provide enough to keep potential buyers looking at what it has to offer. The addition of the Corolla hybrid and hatchback variants also provides customers with more options should they have additional priorities.

It falls short of the Mazda 3 and Honda Civic in terms of its driving experience, but it does deliver a smooth and compliant ride in real-world driving under normal circumstances. Even though reviewers agree that the powertrain lacks when it comes to power and smoothness, the Corolla delivers a perfectly acceptable driving experience where it counts to most people.