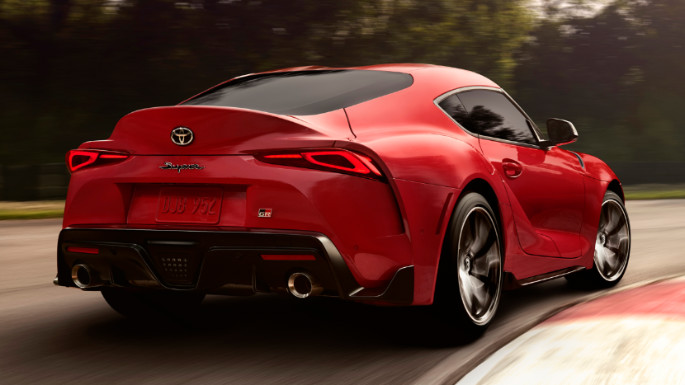 The 2020 GR Supra marks the return of the venerable Supra to the company’s lineup after a 21-year hiatus. The car was developed in partnership with BMW, and it shares much of its engineering with the Bavarian brand’s Z4 convertible.

That closeness to the BMW is not without its critics, as some were skeptical of how well the two company’s philosophies would be able to coexist in one car. Yet its handling and execution speak for themselves. And for Toyota. The Supra is its own thing and a very good thing at that.

The Supra is powered by a BMW-developed turbocharged 3.0-liter inline six-cylinder engine that produces 335 horsepower and 365 lb-ft of torque. It’s currently only available with an eight-speed automatic transmission, but rumors have pointed to a manual transmission option at some point in the future.

The Supra is aimed at new car buyers that want a two-seat sports car that is as capable on the track as it is on the road. It competes with the Ford Mustang, Jaguar F-Type, BMW M2, and Z4, Porsche’s 718 Cayman, Nissan’s Z, and more.

The 2020 Toyota GR Supra is available in three trims for its first year in production: Base, Premium, and a first-year only Launch Edition. All trims have the same engine and transmission but differ slightly in equipment and finishes. Rear-wheel drive is standard on all versions.

TL;DR: The new Supra is sharp and aggressive in a way that its predecessor could never pull off.

The 2020 Supra is worlds away from its predecessor in terms of styling. Where the last Supra was smooth, sleek and round in all the right places, the new car is sharp and aggressive. The nose is long and sloping with a split grille and large scoops. A prominent Toyota logo sits between the slim headlights with LED running lights. It’s a look that works for 2020 in the same way the previous model’s looks worked for in the ’90s.

The Supra’s style is loud from any angle, as the sides are accented with sharp lines and a large scoop just before the rear wheels. Around back, we find the only Supra logo on the exterior of the car, along with sharp, slender taillights and an almost duck-tail shaped spoiler. The look is capped off with dual exhausts and a black rear splitter. The car comes standard with five-spoke 19-inch wheels that fill the wheel wells and add to the already aggressive stance. That sharp styling comes at the expense of outward visibility, as the car’s rear pillars obstruct the view out of the back of the car.

TL;DR: Toyota’s partnership with BMW yielded an interior that feels upscale and focused.

The Supra is a driver’s car, and everything about its interior reflects that singular purpose. The seats, of which there are just two, are heavily bolstered but comfortable and come with standard leather and Alcantara upholstery. On the driver’s side, the steering wheel, displays, and all controls are easily within reach and give the sensation of being in a cockpit instead of just a car. The center console is low but offers a comfortable resting place for elbows. Shorter drivers may find that the center armrest is too low for their liking, but the door armrest works well. Tall drivers may find headroom to be lacking, even with the Supra’s double-bump roof shape.

The overall feel of the interior is one of quality and purpose, not necessarily comfort. That’s not to say that it can’t be comfy, but the size and relative coziness may be a foreign feeling to someone that is used to driving a larger car. Because BMW developed so much of the car’s underlying architecture, the Supra’s interior is configured similarly to the Z4. The infotainment controls and graphics, the gear shift, and the center console are all essentially BMW clones. 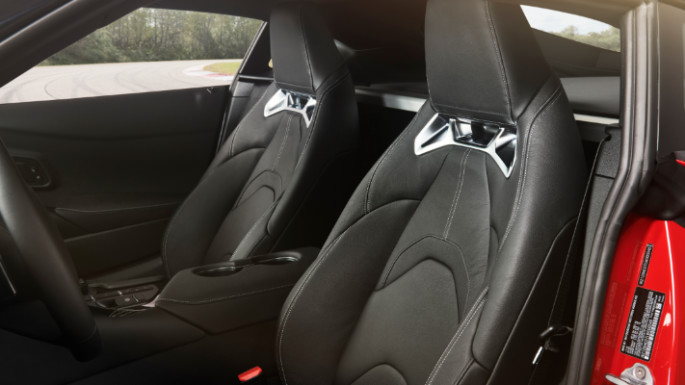 The only real problems with the Supra’s interior are that the car’s sharp styling has created large pillars in the rear, which cut into visibility to a high degree. The small side windows and low driving position can make it hard to get a good view. The other issue is with entry and exit. The shape of the seats, coupled with a somewhat small door opening and low ride height, can make it hard for taller people to get in and out of the car without a good handhold for assistance.

TL;DR: The Supra is a small car, but manages to hold enough gear to keep two people happy on a road trip.

If we’re being realistic, the Supra is not a practical car in the traditional sense. It’s small, has only two seats, and its trunk is quite small. The cargo space in the trunk is large enough for a couple of carry-on bags or a grocery run for a small family, but larger items will have to ride shotgun if they’re to be carried in the Supra. Behind the seats, there’s a pass-through to the trunk, but not much else in the way of storage.

The Supra offers 10.2 cubic feet of storage in the trunk, which is a reasonable amount for this segment of sports car. The trunk opening is wide, and the opening is low enough to make lifting in cargo a breeze. The space is narrow but long, and the large hatchback opening allows loading the space more easily. Though small, the Supra is suitable for a two-person weekend road trip and can accommodate all of their gear without much hassle.

TL;DR: Infotainment is a strong point for the Supra, despite the fact that it’s so closely related to a BMW. 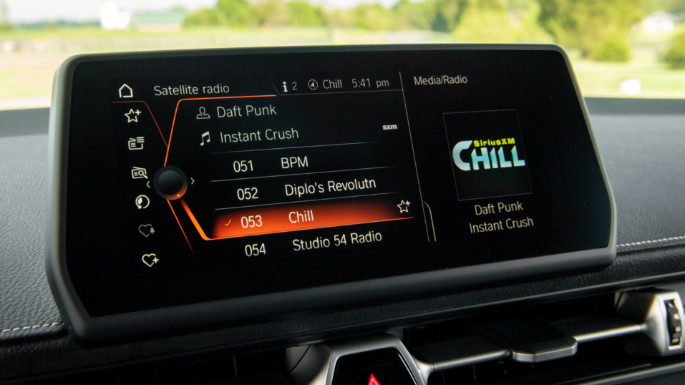 The infotainment system is where the Supra reveals its BMW roots most conspicuously-- thanks to the iDrive setup ripped right out of every BMW currently on the market -- but that’s not a terrible thing. Standard features include a 6.5-inch screen with AM/FM radio, digital audio, SiriusXM radio, USB, Bluetooth, and a ten speakers hi-fi audio system.

Optional features include an 8.8-inch touchscreen with navigation, Apple CarPlay with wireless connectivity, USB, and Bluetooth. Other options include a 12-speaker JBL sound system and Toyota Supra Connect -- a service that allows emergency calls, remote lock/ventilation control, real-time traffic information, maps, a concierge service, and an online app for the car. There is no option to add Android Auto in any configuration.

The car’s audio system is excellent and fills the small cabin with rich sound, even in its base ten-speaker form. The upgraded screen pops with color and easily visible text. In such a small car, it’s almost overkill, but the functionality is smooth, intuitive, and easy to use when the car is in motion.

TL;DR: The Supra comes with a healthy dose of standard safety features.

The Supra hasn’t been tested by the National Highway Traffic Safety Administration (NHTSA) or the Insurance Institute for Highway Safety (IIHS).

However, it does come with a long list of standard safety and driver-assist features that include automated emergency braking with pedestrian detection, forward collision warnings, a rearview camera, lane departure warnings, and automatic high beam headlights.

TL;DR: The Supra is much more of a sports car than the last version, and competes with a wide array of vehicles. 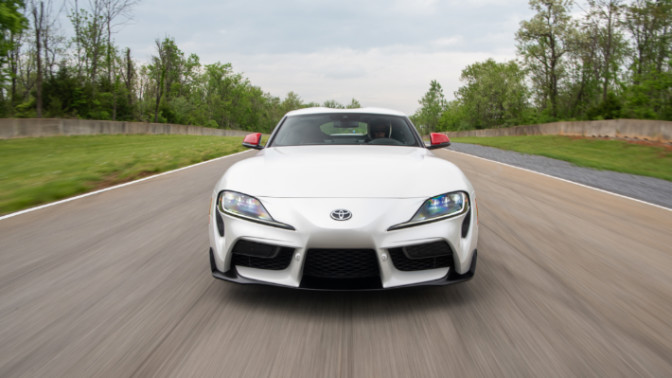 Behind the wheel, the Supra comes alive. The crisp and linear turbo 3.0-liter inline-six pushes the car to 60 mph from a stop in around four seconds and can run all the way to 100 mph in less than ten. Those are hard-hitting numbers that put the Supra on the level of cars like the Porsche Cayman and BMW M2.

Performance is also where the new Supra diverges from its predecessor, which was categorized as a grand touring car.

The new car is an all-out sports car, unequivocally. The 335-hp engine is a spectacular match for the Supra’s chassis and tuning, and with a curb weight of under 3,400 pounds, there’s not much heft to lug around.

The spot-on weight distribution helps with handling, as do the 19-inch wheels with sticky rubber. The Supra’s adaptive dampers and limited-slip differential work together to keep the car composed and controllable in even the most outrageous of driving situations. There’s enough power heading to the rear wheels to get away with a healthy burnout, and if you’re willing to push the limits a bit, the rear end will gladly indulge your request for some manageable sideways drifts. Couple with the exhaust’s wonderful notes on downshifts, and it’s quite an experience.

A key complaint with the new Supra is that Toyota didn’t push to develop a manual transmission. BMW added one to the Z4 in four-cylinder models in Europe, so it’s conceivable that the Supra would get a similar setup at some point in its lifespan.

Even without it, the 8-speed automatic transmission is responsive, accurate, and handles the engine’s power well. Around town, the gearbox works in automatic mode to keep things calm and smooth. On the track, engaging the paddle shifters brings the transmission to life, and shifts are quick with each press of the paddle. Perhaps it’s not as instant or quick-shifting as a heavier dual-clutch setup, but it’s an impressive bit of engineering and programming nevertheless.

We also would have liked just one more drive mode in the Supra. A Track mode that was less restrictive with traction and stability control would suit this car well, especially for those drivers that didn’t want to turn off all such systems entirely.

Overall, however, the Supra is closer to a thoroughbred sports car than anything Toyota’s produced in recent memory, and for that, we’re thankful.

TL;DR: The Supra manages better fuel economy than many of the other cars in its class.

Fuel economy numbers are identical for all trims of the Supra. The car has EPA-estimated fuel economy ratings of 24/31/26 mpg city/highway/combined. That kind of gas mileage isn’t just competitive, it’s better than many of the Supra’s rivals.

The six-cylinder BMW Z4 is nearly identical in the fuel economy department, but the Jaguar F-Type and Porsche Cayman are both worse.

BMW makes the Z4 in a four-cylinder configuration that does better.

The Nissan 370Z is significantly worse, and the list goes on. The Supra bests most sports cars in its segment and does so while offering scorching performance.

If we were shopping for a Supra today, we’d opt for the Premium trim. While the Launch Edition is special and comes with a few features that won’t be available on the standard cars, there’s not enough there to justify the extra cost. The Premium adds a larger screen and the connectivity features that the base model misses out on. That’s worth a $4,000 premium.

If the car’s performance is the only thing that matters, buy the base model. Every trim has the same powertrain and performance, so there’s no missing out on a faster car with the “cheapest” Supra.

TL;DR: Toyota has created a strong value winner with the Supra, in that it’s cheaper than most of its rivals but has comparable performance.

The Supra, though comparable to the BMW Z4 in many ways, is less expensive by a margin and offers a sharper, more focused driving experience.

Against other competitors like the Porsche 718 Cayman, the Supra is cheaper, and nearly matches its performance, mid-engine placement on the Porsche notwithstanding.

Purists may gravitate towards the Porsche or BMW for the name, but the Toyota is a worthy competitor that offers a stronger value proposition.