The Toyota Tacoma is a compact pickup truck with six distinct trim packages. The truck is designed to comfortably seat four to five people and is available with two or four doors. The 2019 model has not changed since this generation of Tacoma was released in 2016. However, the TDR Pro Trim package has a few new additions.

The Toyota Tacoma is a very sturdy compact pickup truck that has superior off road capabilities. It is designed for everyday use but performs best when off road.

The Toyota Tacoma is comparable to the Chevy Colorado, Nissan Frontier and the Honda Ridgeline.

The 2019 Tacoma is nearly identical to the 2018 version in terms of safety features and body style. The new Tacoma has two engine choices: a 2.7 liter 4 cylinder 159 horsepower engine or a 3.5-liter v6 with 278 horsepower. The Tacoma features a six-speed automatic transmission. A six-speed manual transmission is available.

The body style of the 2019 Toyota Tacoma has not undergone any changes. The body is identical to those used since 2016. The only major differences you will see is that double cabs have an option for a shorter bed.

Trim styles with access cabs are only equipped with 6’1 inch beds. Double cabs have the option of having the standard truck bed or a shorter five foot version. The Toyota Tacoma Limited trim version is only available with the short bed. 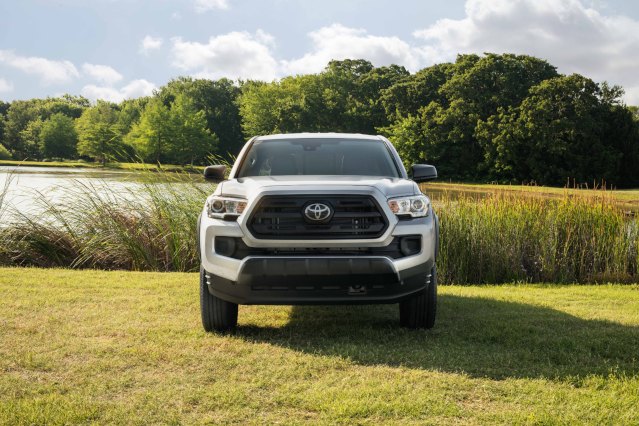 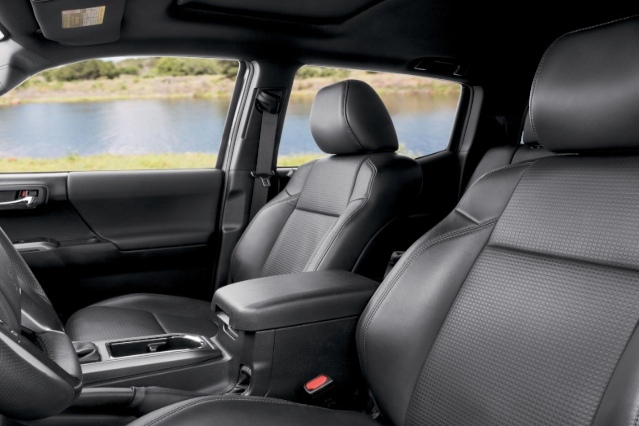 Cloth is used for the seat coverings in the Tacoma as a standard. Leather seats and heated front seats are an option. The Tacoma has two LATCH connectors in the back seat for securing baby seats. However, the Insurance Institute for Highway Safety has given this safety system a marginal rating because it is considered difficult to use. However, with the pedestrian detection system, lane departure warning, traction control, and emergency braking, many accidents can be avoided altogether.

The infotainment system is one of the better systems on the market. The standard system comes with an Entune system that has a 6.1 inch touch screen, six speakers, Siri Eyes Free, Bluetooth and three USB ports. The upgraded version has a 7 inch touch screen. You can add-on other extras like jbl speakers, which will make your audio system shine. 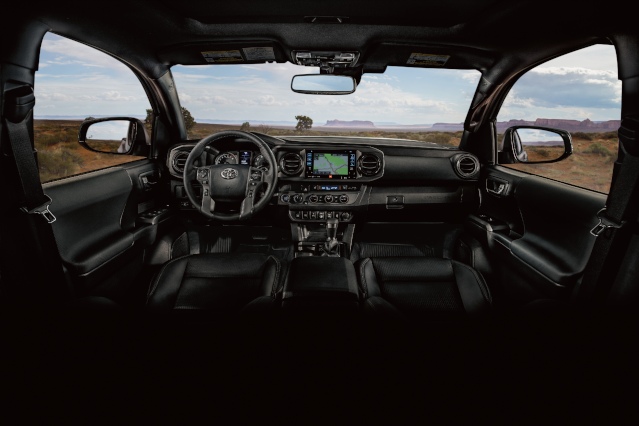 Additional infotainment features are available such as satellite radio, upgraded speaker systems, built-in navigation and wireless device charging. The Tacoma is the only truck to have a built in GoPro camera mount so that you can record all of your driving adventures.

The infotainment system is not compatible with Apple CarPlay or Android Auto.

The interior storage for the 2019 Tacoma is what you would expect from this size of truck. The glovebox and center console are average size and there is a cubby hole in each door. There is limited space under the front seats.

The crew cab provides additional cargo space. The seat lies flat and has a hard plastic covering which allows you to place heavier objects in this area without damaging the seats. Crew cabs also feature cubby holes under the back seat and has storage space on the back of the front seat.

The Tacoma rear-wheel drive V-6 is best equipped for towing and has a capacity for up to 6,800 pounds. However, the other trim packages have a towing rate of 6,400 pounds which still makes them a better choice then their competitors. The additional towing package equips the Tacoma with trailer sway control, a larger alternator, wiring for the lights, extra cooling for the engine and of course, the hitch.

The payload for the Tacoma is what you would expect from this size of truck. However, there are many features about the bed area that make the Tacoma a better option for those who use the bed for hauling.

The Tacoma bed is covered with a composite material that makes it unnecessary to purchase a bedliner. The sides are a little shorter to allow for better reaching when standing on the ground. The shorter sides, however, are not a deterrent because the bed is equipped with latches all the way around to allow for double stacking of goods.

The bed has two molded in storage compartments, four moveable tie down cleats and six tie down eyes. There is also an option for a 400 watt 120 volt power outlet to be installed in the bed.

The Toyota Tacoma offers several safety features that come standard in all of their trims. These features include:

The National Highway Traffic Safety Administration rated the standard cab a four out of five star rating on rollover accidents and gave the four door cab a five out of five rating. The Tacoma has also received the highest rating for safety from the Insurance Institute for Highway Safety based on crash tests.

The engine has a little bit of drag to it when you first accelerate. This is present in both size of engines. The 6 cylinder engine was rated as going from zero to 60 in 8.6 seconds, which is comparable to its competition.

The engine noise is not overbearing and what you would expect in a truck. The automatic transmission can be a little sluggish in city traffic but performs exceptionally in off-road conditions.

If you are looking to take your vehicle off the pavement regularly, you would be better suited purchasing the TRD Pro Trim package. This package gives you a little more height, better suspension and better tires. The Pro package has a locking rear differential and a Muti-Terrain and Crawl Control feature that allows you to master off-road driving. With 9.6 inches of ground clearance, taking the Tacoma onto the dirt will be easy, and with terrain tires and skid plates and fox shocks, it can be more fun.

The Tacoma comes with a six speed automatic transmission. A six speed standard is available by special order. The automatic transmission is very powerful for the size of the truck and handles well when towing or carrying a heavy load. However, when on the open road and just driving, the transmission sometimes whines a little when it is trying to switch gears. This trans was built for off road and heavy pulling, so the gear ratio is spaced further apart than your average car.

Fuel mileage decreases when towing, hauling heavy loads and during some off-road activities.

The Toyota Tacoma SR has a base price of $25,500. This base price includes the four cylinder engine, cloth seating, basic infotainment system and all the safety systems. Four wheel drive can be added to this package for about $3,100, upgrade to a six cylinder for another $2,250 and add keyless entry for $230.

The Tacoma SR5 is a better option for just a little more. The SR5 has a base price of $27,325 and includes everything that the SR offers and fog lights, keyless entry without an upcharge, leather wrapped steering wheel, satellite radio and GPS smart phone integration, The crew cab comes standard with a V6 engine and a power sliding back window.

The Toyota Tacoma TRD Pro and the Tacoma TRD Off Road are very similar in what they offer. The base price for the Tacoma TRD sport is $32,245 and the Off Road is $33,500. Each vehicle comes with a standard V6 engine and has all of the upgraded remote features. Upgraded infotainment system is standard. Each of these vehicles also has upgraded safety features.

The Toyota Tacoma Limited comes with all the features found in the previous four vehicles and has a base price of $37,490. This version of the Tacoma only comes with the crew cab and the short bed.

The Tacoma TRD Pro has a base MSRP of $42,260. This vehicle has all of the features that you want for the ultimate off road experience. All features found in the previous five vehicles are features in the TRD Pro. You have the option to chose between the standard (6’1) bed or the short (5’) bed.