The 2019 Toyota Tundra is an American-made full-size pickup. Originally in production since 1999, this year’s Tundra is part of the third generation of the vehicle released in 2014.

The Tundra is the first North American full-size pickup truck built by a Japanese automaker to be produced in the United States. Originally produced at the company’s production facility in Princeton, Indiana, since 2008, all Tundras have been built in San Antonio, Texas.

Overall, the 2019 Tundra features a variety of high points such as its standard V8 engine, high ratings for reliability, and reintroduction of the Tundra TRD Pro trim. Many reviewers felt the Tundra was not able to match up against competitors with higher safety ratings, towing capacities and performance.

Originally debuted in 2015 to compete against the Ford SVT Raptor and Ram 1500 Rebel, the Tundra TRD Pro is designed for rugged off-road all-terrain driving and ultra-high capacity towing.

A high performance shock and suspension system featuring 11 bypass zones for front shocks and 12 for rear, in addition to a small remote reservoir help to keep the Tundra TRD cool and able to haul massive loads.

The Toyota Tundra has 18-inch alloy wheels which are perfect for off-road driving. The Tundra exterior also has an aluminum skid plate. This feature adds protection as well as an additional style point. 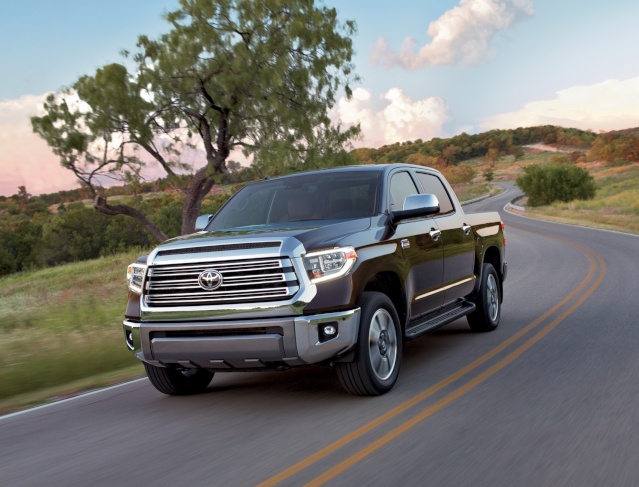 The Toyota Tundra is available in:

*Only available in the Toyota TRP Pro

The 2019 Tundra offers a decent amount of comfort for use as a daily driver work vehicle or recreationally focused off-roader.

While older versions of this truck were frequently applauded for their largest in class interior space, many reviewers cite redesigned rivals as currently offering massive amounts of space.

That said, the Tundra is comfortable for 5-6 passengers spread across its front and rear seats.

Some reviewers found the Tundra’s interior to lack design elements found in similar trucks including Toyota’s own compact truck, the Tacoma. They also cited the lack of keyless entry as a possible drawback for some buyers. 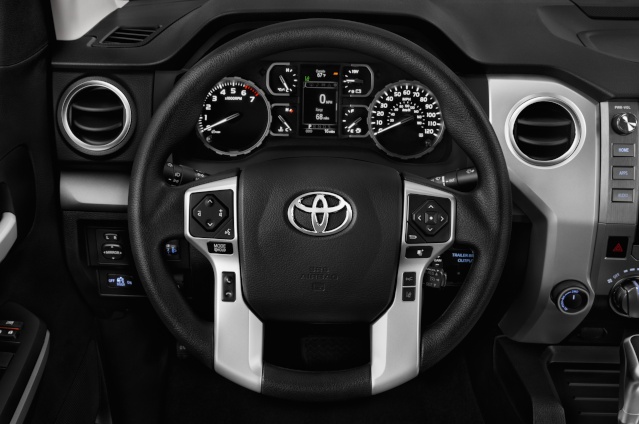 Tundra CrewMax models have a higher rating of “Acceptable” for rear LATCH car-seat connectors than Double Cabs. The two sets of lower anchors for the LATCH system are very easy to locate. The third LATCH connector is located behind the driver's seat in a position some reviewers described as being placed too deep in the seat cushions. 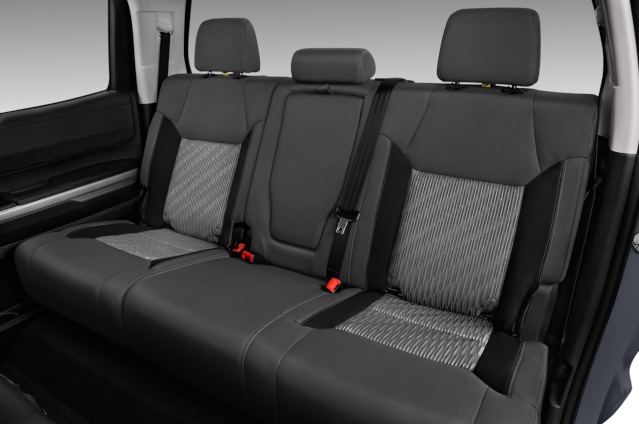 The 2019 Toyota Tundra, depending on trim level and drivetrain configuration, can tow between 6,400 to 10,200 pounds of cargo. This allows the Tundra to compete against trucks like the Nissan Frontier, Ford F-150, GMC Sierra 1500, and Chevrolet Silverado.

The 2019 Toyota Tundra comes with a three-year/36,000-mile basic warranty and a five-year/60,000-mile powertrain warranty. The new car program also offers two years of roadside assistance with an unlimited distance covered.

With a maximum payload ranging from 1,490 to 1,730 pounds, the Tundra is well suited for many applications. Whether towing a boat or hauling equipment to a job site, the Tundra offers a great deal of utility and practicality.

The Toyota Tundra has a Tow Package with added engine and transmission oil coolers. The Tundra has double overhead cams and a dual independent variable valve timing to support heavy duty towing requirements.

The Tunda with optional 5.7 liter V8 engine also have a Tow/Haul mode which automatically adjusts pulling power, throttle response and braking to ensure safe maneuvering even with excessive loads.

This truck also has integrated brake and trailer sway controls to make it easier to park the truck while towing a heavy payload. This also improves emergency braking stability

The 2019 Toyota Tundra includes a variety of features which offer tons of utility and practicality in work, everyday or recreational situations. 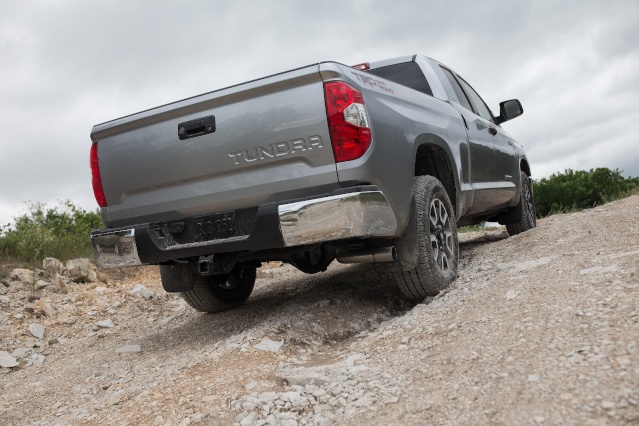 This year’s Toyota Tundra earned high marks from many reviewers for the standard technology and infotainment components included in base trim levels. Every Tundra features an Entune infotainment system, touch-screen display, voice command system and a well-rounded suite of safety features.

Many reviewers have rated the Entune infotainment platform found in Toyotas to be a well-designed and intuitive system that is easy for nearly all passengers to operate.

Unlike some other cars in Toyota’s 2019 lineup, the Tundra does not support Apple CarPlay though the upgraded infotainment system available in some trim levels, does allow for smartphone integration with the Entune suite of apps for phones and tablets.

Some reviewers found even the upgraded 7 inch Entune infotainment touch screen to appear small when compared to other systems available on the market today.

CrewMax Tundras received an “Acceptable” score from the IIHS for it’s roof strength. This is the second highest possible score possible behind “Good”.

Some reviewers found the Tundra’s less than optimal performance in each of these tests opportunities for this car’s competitors to offer better safety.

The Tundra’s standard V8 engines and base horsepower ratings were cited by reviewers as a feature which helps the Toyota stand out against the competition.

Reviewers found the Tundra’s handling to excel in the tight cornering situations typical of commercial work sites as well as busy shopping centers. With smooth and reliable braking, the Tundra offers a firm and stable ride.

Designed to handle rugged, backcountry driving with ease, the Tundra stands up to the task. A stiffer suspension allows for smoother riding over harsh terrain.

Managing just 15 miles per gallon in the city and 19 on the highway, fuel efficiency is not one of the Tundra’s high points. Reviewers found the Tundra’s V8 engines to offer some of the lowest fuel economy ratings of any full-size pickup truck. The Tundra has a fuel tank capacity of 28 gallons. There is an option to upgrade the fuel tank to 38 gallons.

Though the V8 engine of the Tundra is extremely capable for handling the tough situations it was designed for, it does so a at a cost. When compared to competitors such as the V6 powered Ford F-150, the Tundra offers lower fuel economy and towing capacity.

The 2019 Toyota Tundra can be configured in more than 24 ways thanks to possible differences between trims, cab styles, bed sizes, and powertrain upgrades. Starting between $31,520 and $50,530 for the SR, SR5, Limited, Platinum, TRD Pro, the Tundra offers a ton of customization options across its trim levels that all impact pricing and value in their own ways.

The SR5 and Limited are the only trim levels available with either the Double Cab or CrewMax Cab options. The Tundra SR has a Double Cab as a standard feature. The upper trim’s TRD Pro, Platinum are each only available in a CrewMax Cab.

Double Cab Tundras are matched with either a 6-foot-6-inch standard bed or 8-foot-1-inch long bed. CrewMax trucks are only available with a 5-foot-6-inch short bed.

The Toyota TRD Pro, back for 2019 is a great option for those seeking to push a truck through tough off-road driving situations. Reviewers found the Toyota Tundra SR5 CrewMax trim to represent a great value for those looking for a daily driving truck.

The Toyota Tundra Limited starts at $40,785. This trim adds bucket seats in the front which reduces passenger capacity from 6 to 5.

Options include the CrewMax body style priced at $1,965 and four-wheel drive available for $3,050.

The Toyota Tundra Platinum starts at $47,480 in rear wheel drive Platinum CrewMax and is also available in four wheel drive for $50,530. This trim level offers the additions of perforated leather seats, heated and ventilated front seats, a 12-speaker JBL audio system, navigation, and smartphone integration from the Entune App suite.

This trim features front and rear parking sensors, blind spot monitoring, and rear cross traffic alert as standard safety features. Prices start at $47,480 for the rear-wheel-drive Platinum CrewMax and $50,530 for the four-wheel-drive version.