Would we buy one? Maybe...there are a lot of stronger options in the segment. 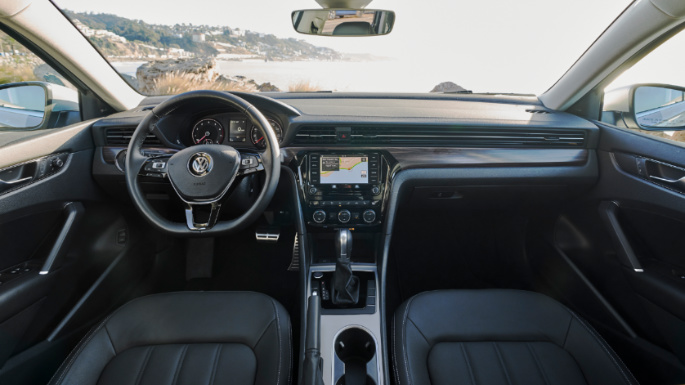 The Insurance Institute for Highway Safety (IIHS) gave the 2020 Volkswagen Passat its highest Good rating in all front, side, and roof-strength tests. The agency has not yet tested the Passat’s crash prevention systems.

The National Highway Transportation Safety Administration (NHTSA) has not yet tested the 2020 Passat. However, the structurally similar 2019 model was awarded a maximum of five stars in overall testing.

Every Passat model for 2020 gets automatic emergency braking with pedestrian detection, blind-spot monitor, and rear cross-traffic alert. All but the base S trim level add adaptive cruise control and lane-keep assist, while the most expensive SEL adds parking sensors and automatic high beam assist. 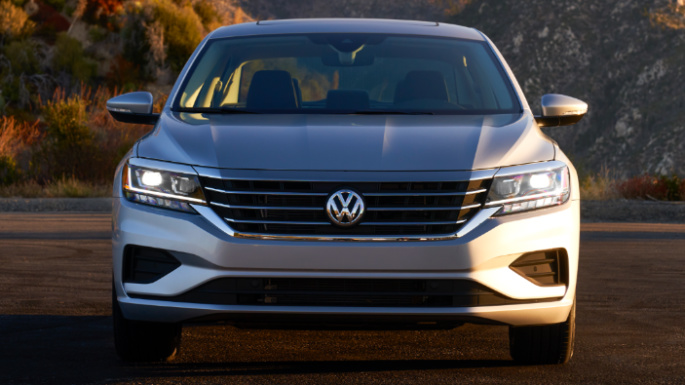 Volkswagen stuffed more standard equipment on the 2020 Passat, and pricing hardly nudges up. There are four trim levels: S, SE, R-Line, and SEL.

At the other end, the most expensive Passat SEL is $32,015 and comes packed with a sunroof, power driver’s seat with memory settings, leather upholstery, power-folding side mirrors, heated front and rear seats, and even a hands-free open trunk. Only the aggressively priced Subaru Legacy comes close based on equipment.

The sweet spot is the Passat SE. Its $27,000-ish starting point is similar to the base price of many rivals, but it comes with rain-sensing wipers, dual-zone automatic climate control, heated front seats with leatherette upholstery, keyless entry with push-button start, and adaptive cruise control. It’s also a viable alternative to a highly equipped compact sedan.

The downside is that the Passat misses out on some features that rivals can offer. It doesn’t offer more powerful engine options, surround-view camera, heated steering wheel, or a panoramic moonroof. And its infotainment touchscreen is small compared to newer designs. 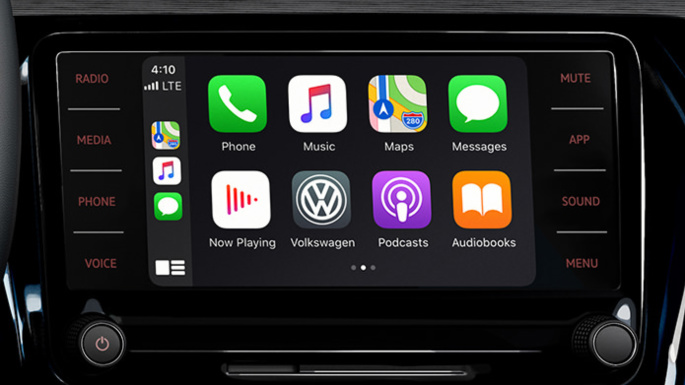 Every Passat uses the same 6.3-inch touchscreen to operate the infotainment system. VW’s App-Connect system incorporates mirroring, Apple CarPlay, and Android Auto compatibility are also standard across the line, along with Bluetooth with streaming audio. S models have one USB port, while all other models add 2 USB charging ports for rear-seat passengers.

Push-button start, remote start, and keyless entry come on SE and higher models. But features such as built-in navigation and a Fender premium audio system are reserved for the top SEL model, and there’s no way to option-in those features. And the Passat’s tech offerings feel dated because they’re a step or two behind even the less-expensive VW Jetta sedan or the more expensive Arteon. 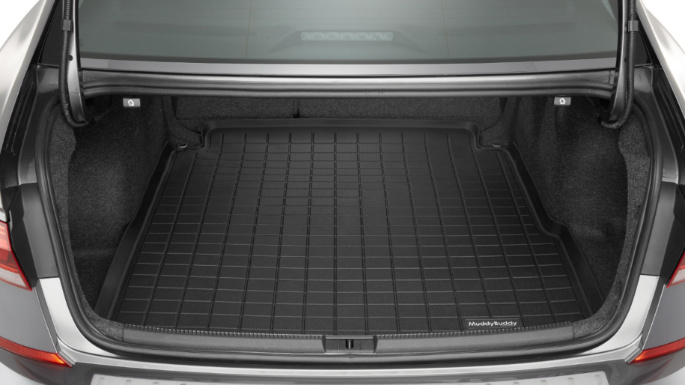 The Passat’s interior is enormous. Even by the standards of ever-growing sedans, its tall roof contributes to excellent headroom for front and rear-seat passengers. Legroom is also generous, especially in the back seat, where it’s around the best in the class. While it’s a little narrow for three to sit in back comfortably, the tall doors make access easy, especially when installing car seats. Only the Subaru Legacy rivals it for a clean, upright design.

Trunk space is also generous at about 16 cubic feet. Only the Honda Accord has more space in this class. The Passat’s trunk opening is also wide, making loading easier. Those looking for all-wheel-drive, however, will be disappointed. The Subaru Legacy has it as standard equipment, while the Ford Fusion and Nissan Altima offer it on some models. 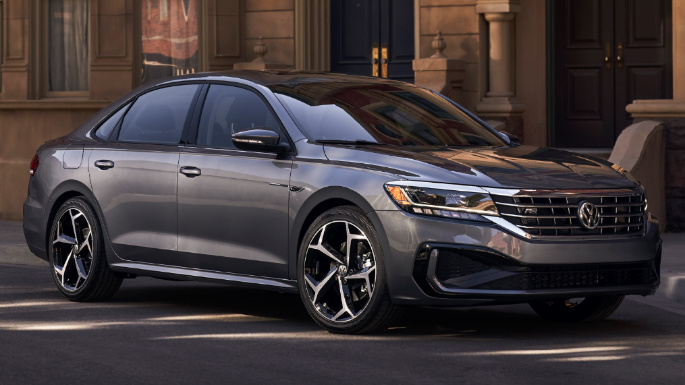 A substantial redesign of the Passat’s front end for 2020 contributed to bolder styling that was absent in previous models. It also helps the VW stand out a little more among newer midsize sedans.

Passat R-Line models, in particular, stand out with 19-inch wheels and more aggressive styling. While the rear was also subtly redone, the Passat still looks a lot like it did before. That’s not necessarily a bad thing, especially for fans of big German sedans. It has an upright shape compared to the newer sedans with sharply sloping lines. Not only does this allow for a large glass area that makes for an airy interior, but it also enhances the view out.

Unfortunately, the interior lacks the premium tactile feel that its design implies. It’s not that the Passat’s interior feels cheap, but the materials are no more than average now. The woodgrain trim looks imitation, synthetic leatherette upholstery, the gauges dated, and the small infotainment touchscreen on all models is out of step with today’s designs. Despite the vast interior room, storage for small items is merely adequate. 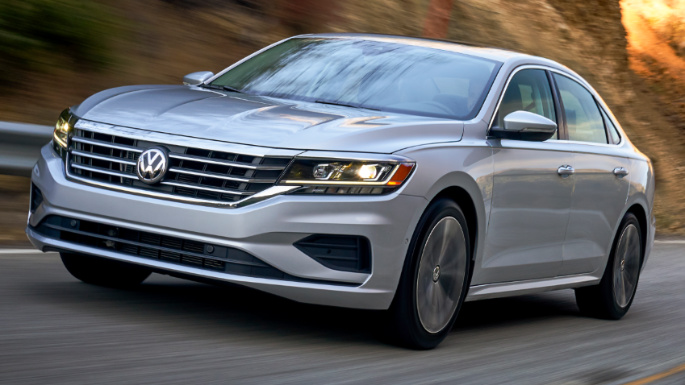 One of the Passat’s best attributes is the way it manages not only a soft and comfortable ride on highways but it also corners well. This big sedan is more than capable of long-distance runs and eating up the miles in an almost classic American car way. But throw it into a curve and its German heritage starts to come alive.

Too bad the only engine available, the 174-horsepower, turbo 2.0-liter four-cylinder, isn’t more lively. That’s not to say it’s sluggish, as it more than holds its own against the standard engines in other midsize sedans. But the chassis can clearly handle more power and all other rivals offer an upgraded engine option. The six-speed automatic transmission is also behind the times and it doesn’t maximize the engine’s power as well as the eight-speed transmission offered on other VW models. 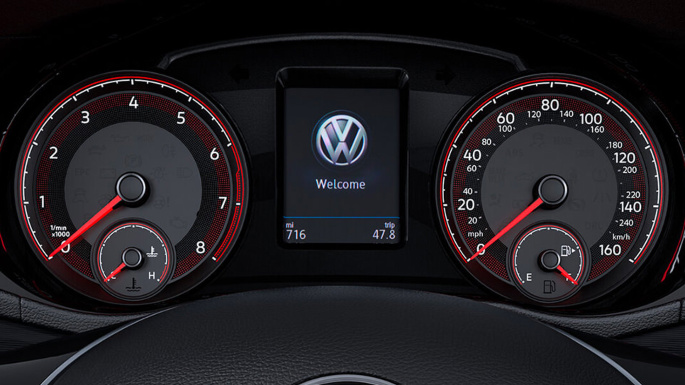 While those figures fall somewhat in the middle among the Passat’s competitors, rivals with far more powerful engines or even all-wheel-drive perform better in all counts. The Toyota Camry LE, for example, is rated at 41 mpg highway. The Passat also lacks a gas-electric hybrid variant like the Camry, Honda Accord, Hyundai Sonata, and Kia Optima.