Powertrain: The B5 has a 260-horsepower, turbocharged 2.0-liter mild-hybrid four-cylinder engine, with standard front-wheel-drive or optional all-wheel-drive.

The B6 that we tested has a 308-horsepower, turbocharged, and supercharged 2.0-liter four-cylinder mild hybrid, and all-wheel-drive.

The T8 has a 308-horsepower, turbocharged and supercharged 2.0-liter four-cylinder and 87-horsepower electric motor for a combined output of 400 horsepower, and all-wheel-drive.

Finally, the T8 Polestar Engineered model packs a 328-horsepower, turbocharged and supercharged 2.0-liter four-cylinder and 87-horsepower electric motor for a combined output of 415 horsepower, and all-wheel-drive.

All XC60s use an eight-speed automatic transmission.

The XC60 gets a light exterior to remodel and numerous technology and powertrain changes. While changes on the outside are mostly confined to new bumpers, grille designs, and wheels, a Google Android-based infotainment system replaces the old Volvo-designed one.

And the Recharge plug-in hybrid (PHEV) models get a larger battery pack that pushes the estimated electric-only range to more than 30 miles.

Would we buy one? We might. After a light update, the XC60 remains one of the best vehicles in a crowded class in terms of practicality, efficiency, technology, and safety. But the infotainment system is a key drawback so test drive it first. 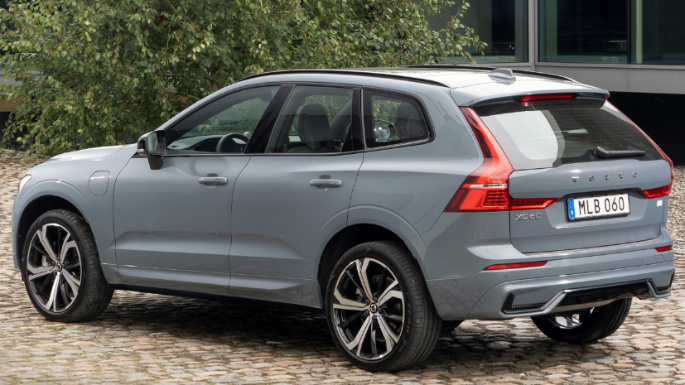 Long the purveyor of sensible, yet upscale, family vehicles, Volvo has transformed itself to be not only a brand for premium SUVs but also one of the most modern-looking lineups in the industry.

Despite being on the market in this form for nearly five years, the XC60 remains near the top of the class for combining basic practical solutions with unexpected levels of style amid a sea of rivals trying to compete with German luxury buyers’ tastes.

It’s available with different powertrains, including two quick plug-in hybrid models, and now boasts a sophisticated Android-based infotainment system as Volvo pitches itself as a progressive brand when it comes to electrification and technology. And the XC60 still majors on the company’s longstanding tradition of advanced crash protection and avoidance. 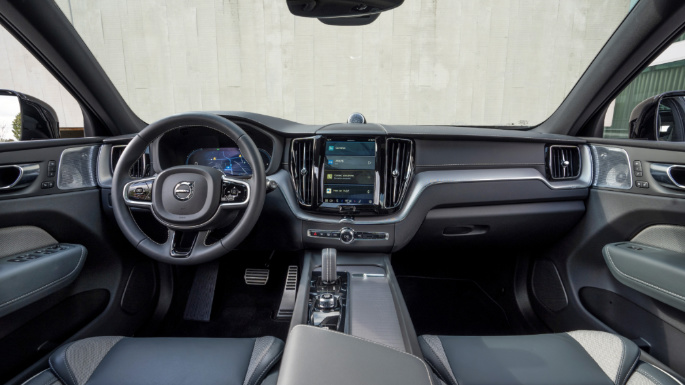 Volvo’s Pilot Assist advanced driver assistance system can perform acceleration, braking, and steering corrections at highway speeds, along with the adaptive cruise control system. It’s not as advanced as some newer systems, such as General Motors’ Super Cruise system, but it’s a respectable assist for longer trips. 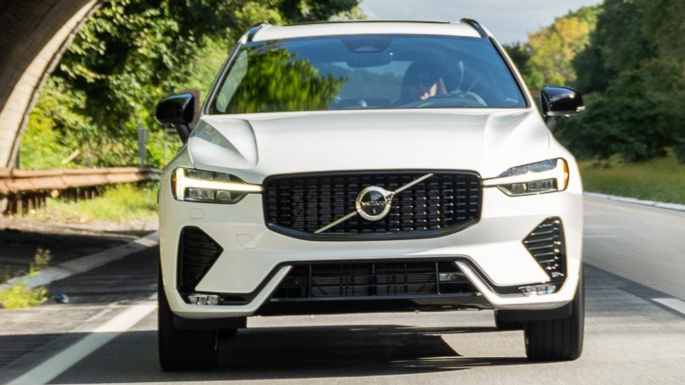 The XC60 starts at a lower price than some of its rivals, and the base model might be all that most buyers need as it includes navigation, a panoramic moonroof, and a digital instrument panel. The B5 Momentum trim starts from less than $44,000, which is on the lower end among vehicles in this class, and with a few options such as all-wheel-drive, 19-inch wheels, and leather upholstery, the price sneaks in just below $50,000. The B5 engine is also sufficiently powerful, even if on paper it looks less powerful than some other upscale compact SUVs.

R-Design and Inscription models come with much of Momentum’s optional equipment included in the base price, but these versions are mostly worth the larger price jump if the more powerful B6 engine or larger wheels are priorities. Adding too many options can push the XC60’s price close to that of the larger, three-row XC90’s.

Those considering the Recharge PHEV should also consider the base Inscription Expression, as the more expensive Inscription and R-Design models can easily push into the $70,000 range, and they don’t receive the same incentives and tax credits as full EVs. 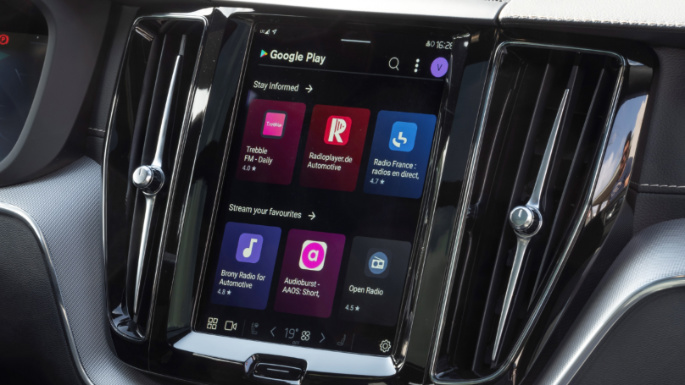 All 2022 XC60s received a new infotainment system based on Google’s Android software, first seen on the new Volvo C40 Recharge, the XC40 Recharge, and Polestar 2 EVs.

It runs through a 9-inch touchscreen that looks the same as before, but now incorporates Google Maps and Google’s voice assistant in addition to Apple CarPlay and Android Auto. Google Maps can also be mirrored in the new 12-inch digital driver’s display that shows typical vehicle information such as speed and fuel. It's more comprehensive than the old Sensus system from last year.

But what we found frustrating to the point of anger was the fact that key features are not yet available on this system. This includes AM radio, satellite radio, and any sort of Apple CarPlay connectivity (either plugged in or wireless) or even Android Auto. This is a key oversight on a luxury crossover that can cost more than $60,000.

Apart from the driver assistance systems, other available tech features on certain models include a 360-degree camera, head-up display, and an air quality monitor. A wireless smartphone charging pad is included in all models.

A Harman/Kardon audio system is optional on Momentum and Inscription Expression XC60 models and standard on others. Every trim other than those can be equipped with a stellar 15-speaker Bowers & Wilkins audio system, too. 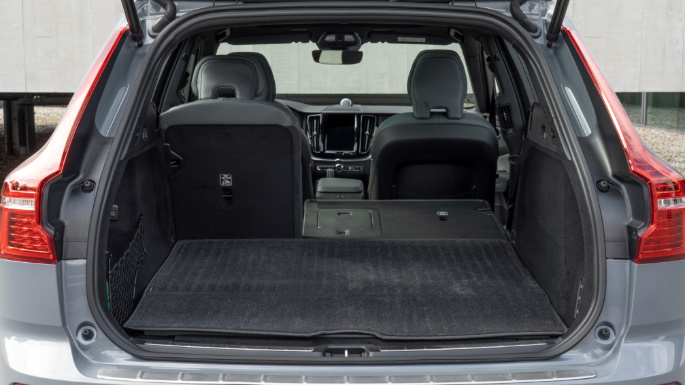 Volvo’s practicality values carry over into its growing SUV fleet, so the XC60 SUV hardly disappoints. While it doesn’t have the largest interior space or exterior footprint in this class, it uses the space it has well. Three adults will just about fit across the rear seat, even with a lump in the floor for the all-wheel-drive or battery pack impeding on legroom for a middle passenger.

The rear seats lack the 40/20/40 split-folding arrangement of some rivals in favor of a more traditional 60/40 split with a pass-through for skis, but they fold flat and that’s not always a given on modern SUVs that have compromised cargo space. Models with air suspension have controls in the cargo area to lower the car and make loading and unloading easier when parked. 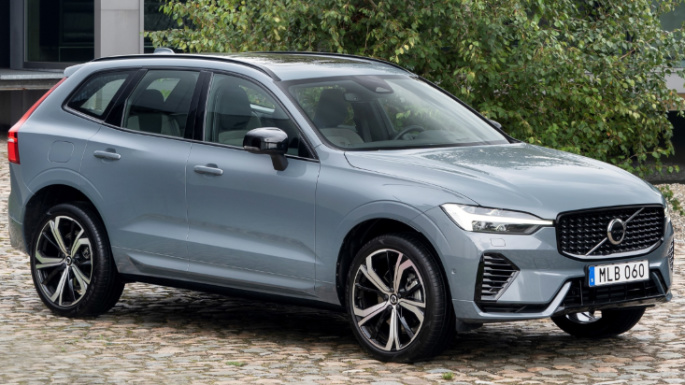 The exterior modifications for 2022 are very subtle, but that’s alright since the XC60 remains one of the most attractive SUVs out there. While Momentum models can be equipped with wheels ranging in size from 18 inches to 22s, R-Design models come equipped with large wheels, along with gloss black exterior trim, which is made even more aggressive on the Polestar Engineered model. And the Inscription is the pinnacle of understated elegance with just enough brightwork on the exterior.

The XC60's interior continues with the very minimalist Swedish design that extends across its entire lineup now. While there are some physical controls for the audio system, most controls run through the touchscreen, which makes changing some settings overly complex.

Every time we climbed inside the XC60, we were impressed by the stout build quality and high-end materials; Momentum models use a combination fabric and synthetic leather upholstery called City Weave, while Inscription offers a wool blend upholstery in addition to leather.

Visibility is pretty good, too, thanks to the Volvo’s more upright glass area compared to some rivals that favor a sloping rear end and letterbox-sized rear window. That said, the surround-view camera system is one of the best in the class.

The space under the front center armrest is small, the cupholders aren’t particularly large and are hemmed in by the gear selector and smartphone charging pad. That leaves the respectably-sized door bins for most storage solutions. 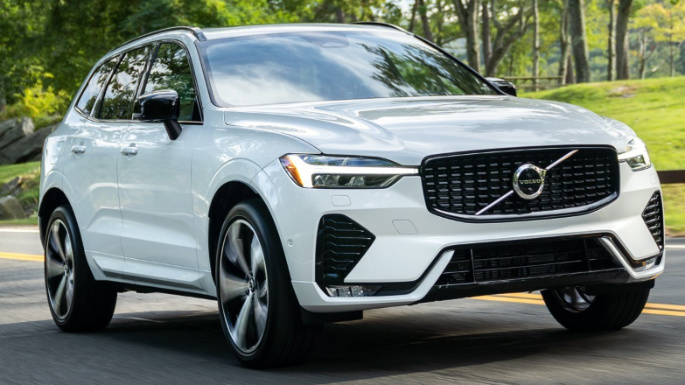 XC60 powertrains range from sufficiently powerful to extremely quick, so there’s no bad pick among them. Most drivers should be satisfied with the B5 models, although the B6 model that we tested is noticeably more powerful thanks to the addition of a supercharger to the turbocharger. Recharge models can be downright quick when the engine and electric motor team provide power.

There are some quirks, though. The four-cylinder-only engine lineup can sound grittier than others in this price class and it’s no match for the six-cylinder power offered by Audi, BMW, and others. The B6 models can also feel slightly odd as the supercharger backs off and the turbo takes over.

But for passing power or while cruising, most drivers won’t notice these issues. We were continously impressed with the hearty power that the B6 powertrain pumped out; it was more than enough for any driving scenario we encountered. Shoppers on a budget will be more than happy with the base engine in the B5 model.

And the ride is more firm than some in this class without any benefit in handling, apart from R-Design and the Polestar Engineered models. Even then, the XC60 is most adept when cruising on smooth highway surfaces and it’s nearly as quiet as the best in class. Air suspension that can lower the vehicle at highway speeds or when parked, or raise it for some off-road situations, is available on R-Design and Inscription models, but it doesn’t noticeably improve the ride. 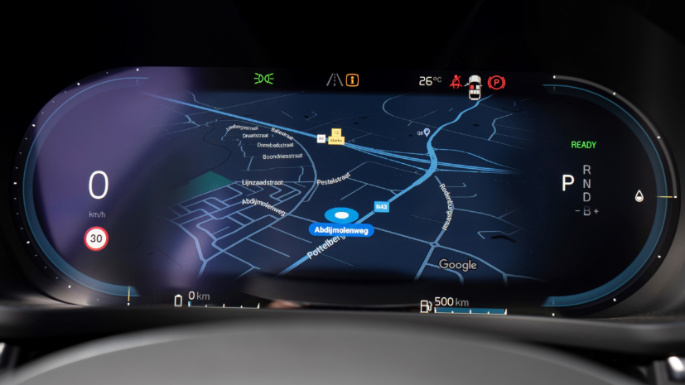 Those figures are competitive with the class, if not exactly standouts. The addition this year of mild hybrid 48-volt systems on the B5 and B6 engines did not substantially change fuel economy figures over last year. And while all XC60s now have hybrid engines, only the Recharge and Polestar Engineered's T8 powertrain can run on electric power only.

The XC60 Recharge and Polestar Engineered models are rated at 25 mpg combined when using both gas and electric power. Early 2022 models had an electric-only range of 19 miles, but Volvo has phased in a larger battery pack and now estimates 32 miles on a full charge.

With the elimination of the X3 and GLC PHEVs, the XC60 Recharge models compete with the Audi Q5 PHEV and Lexus NX 450h+. The Volvo sits between the two in price and, with its revised range estimates, also sits between them in an electric-only economy. 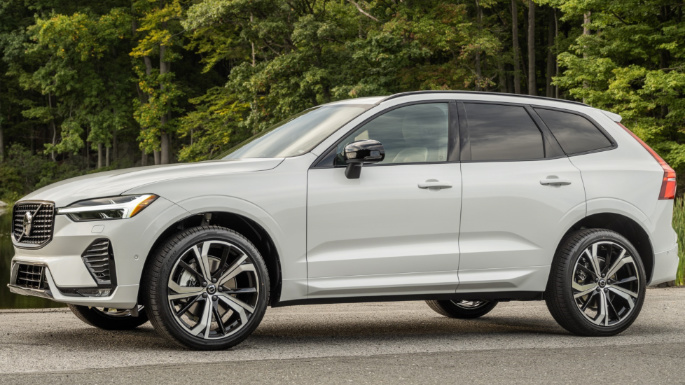 Options include 19, 20, or 22-inch wheels, leather upholstery with wood trim, a Harman/Kardon audio system, integrated booster seats, and a power liftgate. The Climate and Advanced packages are also optional.

Options include all-wheel-drive, the B6 or PHEV powertrains, 21 or 22-inch wheels, a power liftgate, rear booster seats, air suspension, and the Bowers & Wilkins audio system. The Climate and Advanced packages are also available.

Options include all-wheel-drive, the B6 or PHEV engines, a wool blend upholstery, 20 or 22-inch wheels, integrated booster seats, air suspension, a power tailgate, and the Bowers & Wilkins audio system. The Climate and Advanced packages are also optional.

If we were in the market for an XC60, we’d stick with the B6 AWD Momentum trim. For around $50,000 and with a few option boxes ticked, it represents a good value among other compact luxury SUVs while including desirable features. Or if you're on a tighter budget, we'd happily recommend choosing the base engine and then adding your desired options from there.

For XC60 Recharge customers, stick with Inscription Expression and a handful of options to keep the price below $60,000 before EV incentives and grants.