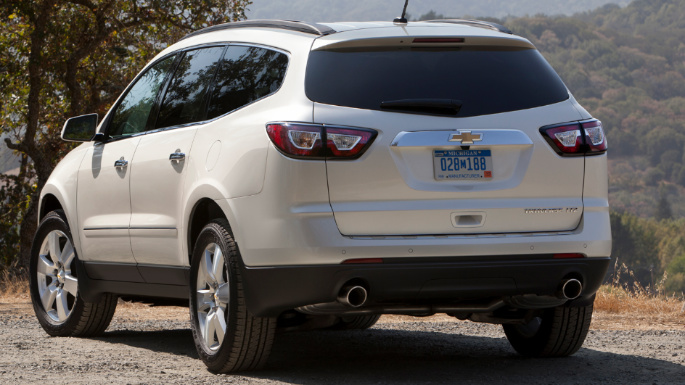 The 2017 Chevrolet Traverse is a three-row midsize SUV that competes against popular vehicles like the Honda Pilot and Toyota Highlander. The Traverse has one of the roomiest interiors in its class, thanks to a long wheelbase and a flat floor. Few other SUVs in the segment have as comfortable third-row seats or as much cargo space.

The Traverse is in the ninth year of its first-generation on the market, and it is starting to show signs of its age, with a small infotainment screen and few cutting-edge tech features. Despite this, it has a near-luxury ride, with a smooth V6 powertrain and a quiet interior that doesn't let in much road noise. The Traverse is also reasonably agile for its size, with secure handling and available all-wheel-drive. It has a large turning circle, though, so parking takes practice.

The Chevy's V6 offers impressive power, but it's not as fuel-efficient as rivals, nor is a hybrid powertrain available. It has seating for seven or eight passengers, available tri-zone climate control, and stout towing capacity to make it an excellent road trip vehicle. Other major competitors in the segment include the Ford Explorer, Mazda CX-9, and Dodge Durango. A redesigned Traverse is planned for 2018. 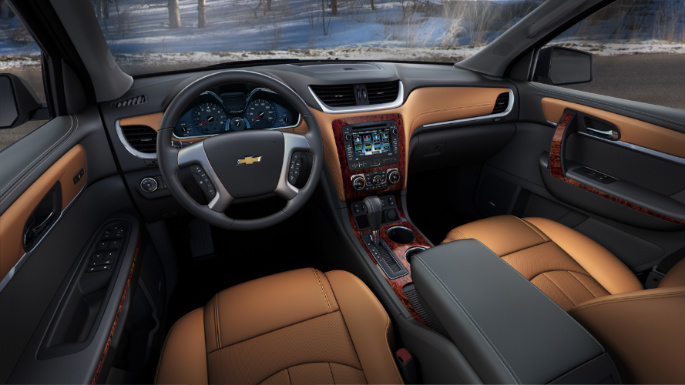 The Insurance Institute for Highway Safety tested the 2017 Traverse, giving it scores of 'Good' (the best possible score) in all significant crash test categories. The IIHS also tested how easy it was to access and use the child seat anchors and gave the Traverse an 'Acceptable' score. Unfortunately, the Chevy did not capture either of the IIHS's highest honors, the 'Top Safety Pick' or 'Top Safety Pick Plus' awards. Specifically-equipped trims of the Honda Pilot, Mazda CX-9, and Toyota Highlander all received the 'Top Safety Pick Plus' designation.

Like other SUVs in its class, the Chevy comes with traction control, airbags, and a rearview camera. 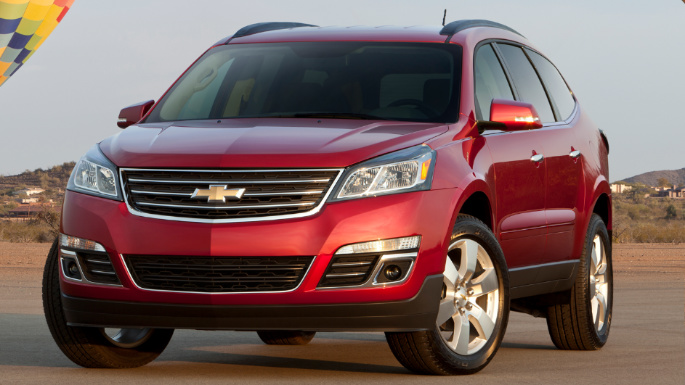 Some shoppers will find the Chevrolet Traverse to be a great value compared to its more expensive sibling, the Buick Enclave. The Chevy has the same great engine and vast cabin space as the Enclave, but it lacks some luxury features and the Buick's quieter ride. Nonetheless, it's significantly more affordable, and many buyers will be getting the things they love about the Enclave at a much-reduced price.

The Traverse's fuel economy isn't as good as rivals, which dings its value proposition. Owners want a vehicle that is inexpensive to run. While the Traverse's V6 does take regular unleaded gasoline, its inefficiency and substantial 22-gallon fuel tank mean that owners will be spending a decent amount of their time and money at the gas station.

The 2017 Chevrolet Traverse has average expected reliability. Its engine, transmission, and fuel system all have above-average predicted reliability, but the paint integrity and in-vehicle electronics score in the middle of the class.

The Chevy Traverse comes with a 3-year/36,000-mile basic warranty length and a 5-year/60,000-mile drivetrain warranty. It's a standard warranty for the vehicle segment, though its chief rivals all offer 2-5 years of roadside assistance for free. Toyota will even cover the Highlander's scheduled maintenance costs, for things like oil changes and tire alignments, for the first two years or 25,000 miles.

The Traverse has a lower starting price than some rivals, and the top-tier Traverse Premier retails for $2,000-$10,000 under other top-rung midsize SUVs. It doesn't have a competitive set of tech features, though, which nullifies its relative value. 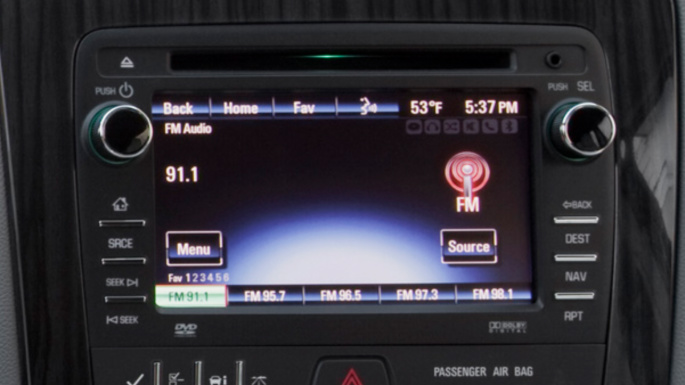 The base Chevrolet Traverse LS trim comes with standard features like AM/FM radio, a CD player, an auxiliary input, front and rear USB ports, satellite radio, OnStar, and a 4G LTE high-speed wireless Internet hotspot. Bluetooth phone connectivity, a backup camera, and a 6.5-inch touchscreen are also included. The LS's tech is straightforward and easy to use, with a larger touchscreen than the base models of rivals like the Toyota Highlander and Honda Pilot.

The top-of-the-line Premier has heated and cooled front seats, plus a heated steering wheel. There are also standard driver safety tech, a navigation system, and memory settings for the driver's seat and side mirrors. It's fancy for a Traverse, but it lags behind competitors in its sheer number of tech features. Notably missing from the $42,940 Traverse Premier are a power sunroof, rain-sensing wipers, keyless ignition, adaptive cruise control, HD Radio, or an upgraded infotainment touchscreen. These features come standard on the most expensive trims of the Ford Explorer, Honda Pilot, Mazda CX-9, and Toyota Highlander. 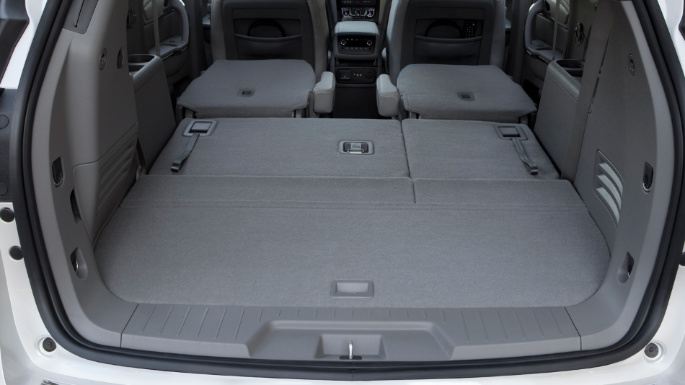 Few other three-row midsize SUVs are as practical as the Chevrolet Traverse. Its massive interior and flat floor make it a fantastic choice for families. There is seating for seven to eight people, with good seating space throughout. Most midsize SUVs don't have very roomy or comfortable third-rows, but the Traverse is a rare exception. The headroom is average, at 37.8 inches, but the leg- and shoulder room are amongst the best in the class.

Even harder to find is a midsize SUV with both adequate third-row space and cargo area, but the Traverse excels in both departments. Despite only measuring a few inches longer than its main rivals, the Traverse has significantly more cargo area behind its third-row than the Pilot, Explorer, CX-9, or Highlander. Its 24.4 cubic feet of space is nearly double that of the Highlander, which makes do with just 13.8 cubes.

The rest of the interior is just as welcoming to the storage, with cargo bins and door pockets. There are 10 cup holders.

All-wheel-drive is an option, making the Chevy a decent choice for those living in colder climates. The available power liftgate and rear parking sensors help make everyday driving more convenient. 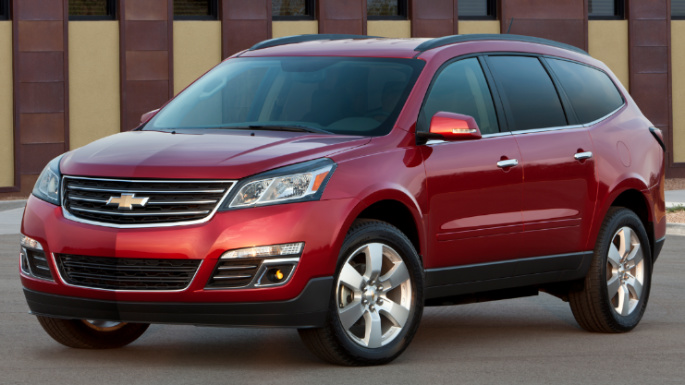 With its warm and welcoming interior, the Chevrolet Traverse's cabin is a pleasant place to relax during long trips. Driver controls are intuitive and straightforward, and the infotainment menus are a cinch to navigate. Chevy made everything accessible and understandable to use. The steering wheel is pleasantly large, and the seats are very comfortable in all three rows.

From the outside, the Traverse is more rounded and approachable than some of its more rugged rivals. With its upgraded wheels and exterior accents, the Premier trim looks like a premium vehicle and quite reminiscent of the pricier Buick Enclave.

The Traverse's interior refinement is about average for the class. Some of the plastics feel lower-quality, and the upholstery is comfortable but not particularly upmarket.

Chevy gave the Traverse a flat floor, giving it an almost minivan-like feel inside. It offers passengers plenty of room to stretch out, and the Traverse is an enjoyable vehicle for taking on road trips. Interior and cargo space is excellent, and three zones of climate control help keep everyone comfortable.

The 2017 Traverse is in the ninth year of its first-generation on the market, meaning it hasn't yet received a significant redesign. The interior is starting to look dated. Fortunately, 2018 brings an all-new Traverse. 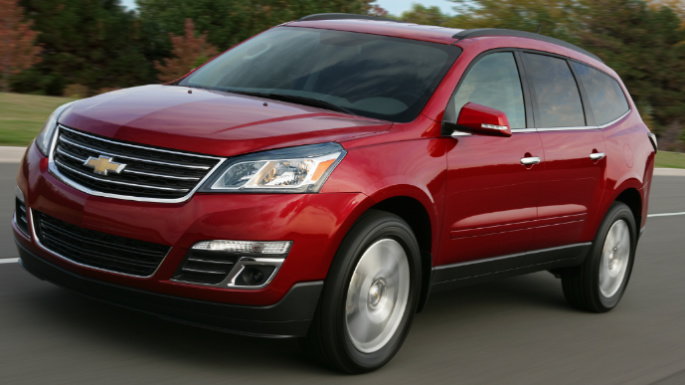 The Traverse is powered by a 3.6-liter V6 engine that has good power delivery. Its 6-speed automatic transmission shifts smoothly, and the Traverse has a quiet and soft ride. Power is sent to the front wheels, and all-wheel-drive is available. The Traverse handles well around town, which is surprising considering its size, but it doesn't have the agility to quickly get in and out of tighter parking spots.

At speed, the Chevy is a pleasure to drive. The cabin remains quiet and undisturbed by wind or road noise, and the large windows afford good outward visibility. The V6 has plenty of oomph for passing slower cars and merging.

The brakes, throttle, and steering feel very good. The throttle, in particular, is very smooth and has excellent power delivery.

Towing is just above the class average, with a maximum capacity of 5,200 pounds. It requires an optional package, including a 'Tow' mode, an integrated tow hitch, and a heavy-duty cooling system.

A vehicle's fuel economy is essential, particularly for owners who drive long distances daily. Unfortunately, the Chevrolet Traverse's V6 engine is not the most efficient motor in its class.

The base Traverse 1LS FWD returned just 18 mpg combined in EPA estimates, while the Premier AWD got 17 mpg. Those numbers are not very competitive, compared to the Mazda CX-9 AWD (23 mpg), Honda Pilot AWD (22 mpg), or the Toyota Highlander AWD (22 mpg).

The Toyota also is offered a hybrid powertrain, and it has an overall EPA estimate of 29 mpg. 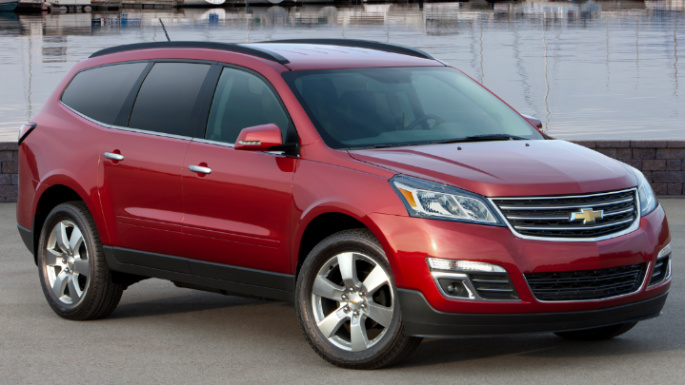 The 2017 Chevy Traverse comes in five trim levels. Front-wheel-drive is included, and all-wheel-drive is available for an additional $2,000 on all but the base LS 1SM trim.

The Traverse LS 1LS comes with some additional convenience features and trim accents for $32,195.

The Chevy Traverse LT 1LT, which retails for about $34,995 with the destination charge, has things like rear parking sensors, fog lamps, heated side mirrors, a power driver's seat, remote engine start.

The top-of-the-line Premier (formerly called the LTZ) trim costs about $42,940. It has a suite of driver safety technology like lane-departure warning and forward collision warning. Other amenities include unique exterior accents, memory settings for the driver's seat and mirrors, leather seats, a power passenger seat, heated and cooled front seats, second-row captain's chairs, a heated steering wheel, and navigation.

If we were on the market for a Traverse, we'd splurge on the LT 2LT. It has nice features like heated seats, Bose audio, and a power liftgate. We might also try to find an affordable 2018 Traverse, which benefits from a redesigned exterior and interior. The Traverse is a great midsize SUV for families and people needing plenty of interior space.