The Hyundai Sonata is a midsize family sedan that was last redesigned for the 2015 model year. The car has been sold by Hyundai since 1985 and is now in its seventh generation. The Sonata's main competition comes from the Toyota Camry, Honda Accord, Ford Fusion, Nissan Altima, Volkswagen Passat, and Kia Optima. Hyundai's entrant is aimed at new car buyers wanting a reliable vehicle with a comprehensive warranty. The Eco model will appeal to new car buyers that want an especially fuel-efficient car.

The 2019 Sonata is mostly a carryover model from 2018 when the car received a series of moderate revisions. Hyundai last completely updated the Sonata in 2014, and a completely overhauled version, revealed in April 2019, is due later this year.

TL;DR The Sonata's updated styling sets it apart from the everyday family sedan. 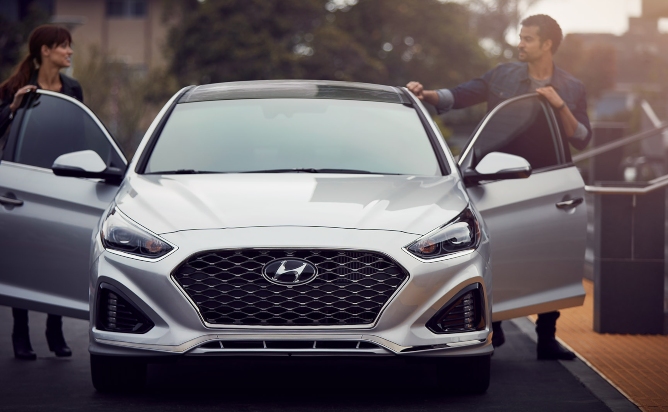 The Sonata, while a carryover, still carries bold styling that helps it stand out in a crowded midsize sedan segment. The SEL, Sport, Limited, and Ultimate trims come with a sport mesh grille and front fascia, which gives the car an aggressive and sporty look. Critics have praised the Sonata for its unique front-end styling, which features a large grille for all trims and sharp headlights with available chrome accents and low-mounted fog lights. 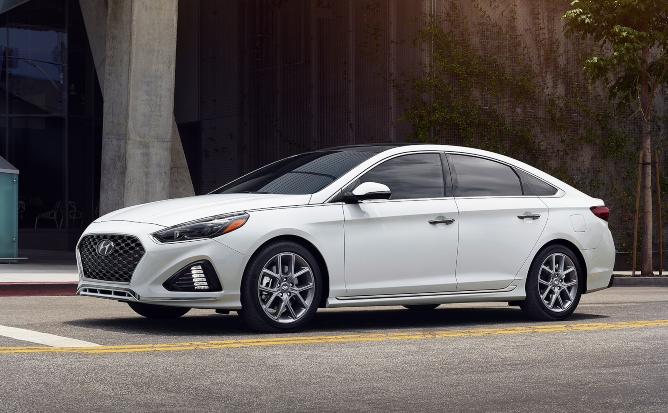 The rear of the car features slim taillights and smooth lines from top to bottom. The Sonata can be equipped with LED lighting front and back as well. Reviewers like the car's clean lines from front to back and the uncluttered look of the rear end.

TL;DR While the Sonata's interior isn't as refined as others in the segment, it is roomier and more comfortable to live with daily. 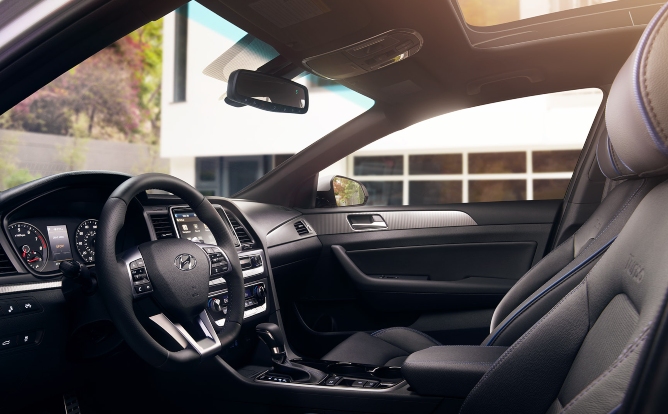 The Sonata is considered a spacious and comfortable vehicle. Reviewers praise the car's interior space, which is large enough to accommodate five adults and plenty of cargo. The 2018 update also brought a new center stack with revised controls to the car. They are noted as being easy to reach and clearly labeled, making them much easier to use while driving the vehicle.

The Sonata's front seats are wide and comfortable, and the rear seat is generally praised as being well-cushioned. Critics note that the car is suitable for long trips, no matter the seat and that both rows are comfortable for adults.

Reviewers like the Sonata's sturdy interior and note that even though the car's materials aren't as nice as other vehicles in its class, the Hyundai feels well-constructed and robust. The cabin's controls are located within easy reach for most people and are intuitive, easy to use, and clearly labeled. The Sonata's interior is spacious with room for adults of nearly any size. Outward visibility is good, though taller people may feel crowded in the back seat.

Critics like the Sonata's wide range of seating positions for front-seat passengers and note that the car's large door openings make entry very easy. Buyers with children will find that the car's sloping roofline may make it difficult to load and unload car seats. Users note the Sonata's LATCH system as being difficult to use. The lower anchors are buried deep in the seat cushion, which makes it difficult to both find them and to attach the car seat's hooks.

The Sonata has 16.3 cubic feet of trunk space, which is better than the Chevrolet Malibu, Ford Fusion, and Toyota Camry. The Sonata's rear seats fold down as well, opening up the cargo area with more room. Some reviewers rate the Sonata at or near the top of its class for cargo capacity and utility. The trunk, while cavernous, has a small opening, which may make it difficult to load larger items. 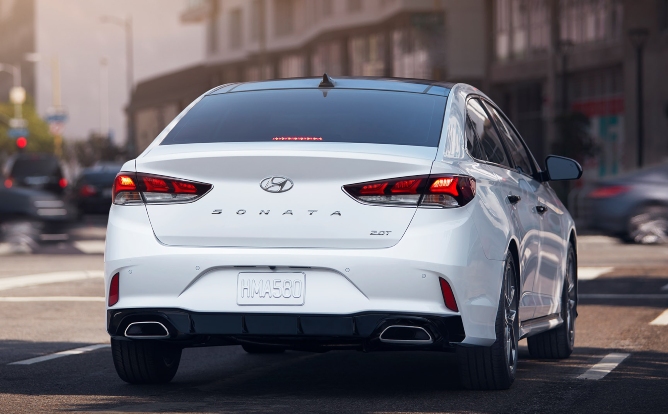 Small item storage space is generous. Bins and pockets are conveniently placed and are sized appropriately for cell phones and other items that need to be within easy reach. Other details like an optional "grippy" wireless charging pad for smartphones add to the convenience of the Sonata's cabin.

TL;DR The Sonata features an easy-to-use interface and a responsive touchscreen.

Hyundai has similar infotainment software to its sibling company, Kia. Called Blue Link in the Hyundai, the system is bright, easily navigated, and responsive. Apple CarPlay and Android Auto come standard for every Sonata, which isn't something all competitors offer. 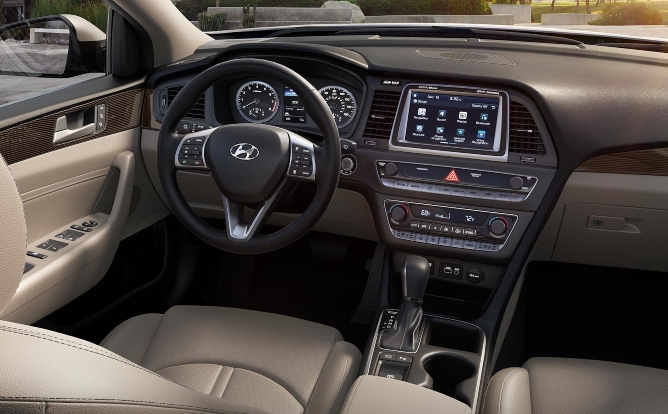 Reviewers praise the Sonata's infotainment system for its on-screen controls with buttons that are spaced out and easy to use on the move. The available Infinity audio system is noted as having good sound quality and volume. Navigation is available in higher trim levels of the Sonata, but most buyers will be satisfied using maps and navigation options through the standard Apple and Android smartphone integrations.

TL;DR The Sonata has earned top marks in crash tests and can be equipped with a wide array of advanced safety tech.

The Sonata is considered a safe vehicle. It earned a Top Safety Pick + designation from the Insurance Institute for Highway Safety. The organization gave the Sonata "Good" marks for front- and passenger-side crashworthiness, side impact, roof strength, and head restraints/seats. Front crash prevention was rated as the highest rating, "Superior," when the Sonata is equipped with optional safety equipment.

TL;DR The Sonata's updated suspension and brakes make for an engaging driving experience.

The 2019 Sonata comes standard with a 2.4-liter four-cylinder engine that produces 185 horsepower. Reviewers note that, while the base engine provides adequate acceleration, it can feel sluggish under heavy throttle. The Sonata's six-speed automatic transmission has also earned praise for its smoothness. Front-wheel drive is standard for all models.

A 245-horsepower 2.0-liter turbocharged four-cylinder engine is available. When equipped with this engine, the Sonata is capable of 0-60 mph times in the high six-second range. Critics like the engine's power delivery and smoothness.

The Sonata Eco comes with a 178-horsepower 1.6-liter four-cylinder engine. This engine has less power than the base 2.4-liter but brings hybrid-like fuel economy.

Critics love the Sonata for being sporty without feeling too aggressive for a family sedan. They like the car's compliant ride and predictable handling and note that improvements to the Sonata's chassis have improved the driving experience without sacrificing too much ride quality. The Sonata's braking performance is strong but trails other cars in its class in braking distance testing.

Overall, the Sonata is viewed by critics as being a more engaging car to drive than many of its competitors. The Hyundai feels like a more compliant car that is more responsive and has a firmer ride than the previous version. Critics note that the improvements in handling have made the ride firmer and bumpier than before, but not to the point of being distracting or unbearable. The Sonata's cabin is noted as being quiet, with only the loudest road noises making their way inside.

TL;DR Though competitive in its class, the Sonata isn't remarkably fuel-efficient.

The Sonata is considered to be a good value, even in a class that includes the Toyota Camry and Honda Accord. Critics praise the Sonata for being well-equipped, even in the lower trim levels, and Hyundai offers one of the lengthiest warranties of any manufacturer in the United States. All vehicles from the brand come with a 5-year/60,000-mile new vehicle limited warranty, a 10-year/100,000-mile powertrain limited warranty, and five years/unlimited miles of roadside assistance. However, it is not transferrable from first-owners of the vehicle.

The Sonata is praised for having simple, easy-to-understand trim levels that make choosing a version relatively straightforward. A downside to the simple trim choices is that customization options are limited, with certain features only available for specific models. Critics' choice for the best value is the Sonata SEL, which can be equipped with automatic emergency braking, lane keep assist, and smart cruise control.

The Sonata Limited 2.0T has a starting price of $33,020 and comes standard with a 245-horsepower engine, sport-tuned steering, 18-inch wheels, a rear parking assist system, rear side window sunshades, upgraded leather upholstery with sport bolsters, an 8-inch touchscreen with navigation, and an upgraded Infinity audio system. This model is available with a panoramic sunroof.

The Sonata Hybrid has an MSRP of $26,670 and is powered by a 2.0-liter four-cylinder engine and a 38-kW electric motor. It includes standard features such as automatic emergency braking, lane keeping assist, smart cruise control with start/stop, electronic parking brake with auto vehicle hold. This model can be ordered in two trims: SE and Limited.

The Sonata Plug-In Hybrid has an MSRP of $34,320 including destination and comes with a 50-kW electric motor. This model can be ordered in two trims: Standard and Limited.

Many critics view the Sonata as being the value-driven alternative to other very popular cars in the segment, like the Toyota Camry and Honda Accord. The Sonata typically offers similar features to its rivals at a lower price and with a longer warranty. Even so, Hyundai's vehicles usually depreciate faster than mainstay brands like Toyota and Honda.

Hyundai, in general, has won praise from critics for its reliability, which has improved in recent years. The overall increase in build quality, coupled with the brand's warranty, make the Sonata a safe choice in the midsize sedan market.