The Ford F150 is a best-selling American full-size pickup truck. It will become clear as to without any need to guess why a truck buyer would consider and choose an F150, its equipped with great standard safety features, and plenty amazing ones to add-on, the dynamic range of engine choices put the F150 at the head of the class in the towing and hauling competition. There are several models with many different options such as cab and bed size, sport appearance packages and wildly popular technology apps like Alexa and Waze. The 2019 model year F150 is at the head of it's class but is also in good company with full-size trucks the likes of the GMC Sierra 1500, Chevy Silverado, Ram 1500, Toyota Tundra and Nissan Titan. The F150 really is an all around truck for those looking for a hard working work truck, hardcore heavy-duty hauler, or a daily driver that can handle shuttling the family around making hardware store runs, weekend projects and off-road adventures.

New to 2019 model year the F150 Limited inherits the Raptor's high output EcoBoost 3.5 liter twin-turbo V6 motor that cranks out 450 wild ponies. Both the Raptor and the Limited model now have 36-gallon fuel tanks standard. The F150 Raptor receives some new goodies in the suspension department and what can be described as off-road cruise control for four wheel drive. Most beneficial to all drivers and pedestrians everywhere is forward collision warning with emergency braking is now standard on the F150. 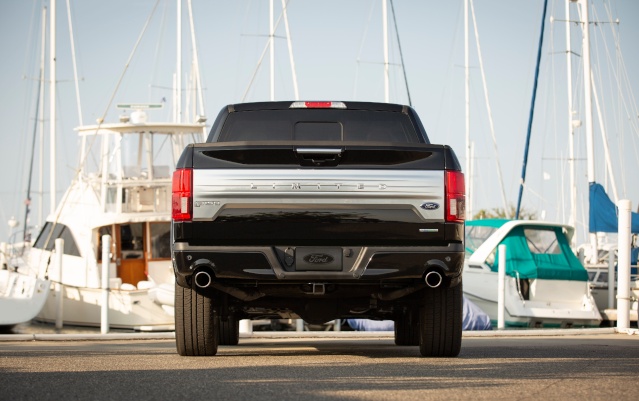 The F150 is full-size truck, there is no getting over that, however Ford does offer three different bed sizes 5.5; 6.5 and 8 foot. Each model has at least one or more available sport appearance package some trim levels have two packages others have three options which can include body color exterior door handles, headlamps with darkened headlamp housing, larger wheels and accent color step bars and many other add-on styling options.

Depending on choice of trim and options the F150 can seat 3 in a regular cab or up to 6 passengers in the SuperCrew cab, and for those who carry a lot of hardware or tools there are also two different style folding rear seat configurations to choose from. 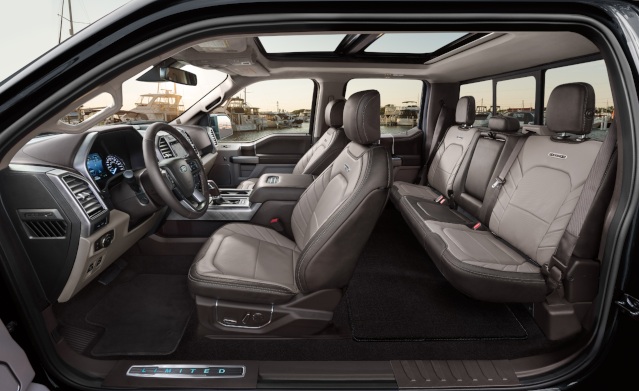 The F150 interior quality is great even on the entry level models and only get better as you work your way up to the Limited model which has available brushed nickel knobs. The layout of controls are clean looking and easy to use Ford deserves high marks for making this a truck you wouldn't mind spending all day working from. If you were so inclined to spend all of you day in your truck you could benefit from the available heated and cooled seats not to mention the massaging seat option, simply incredible, sure to make road trips all the more enjoyable. 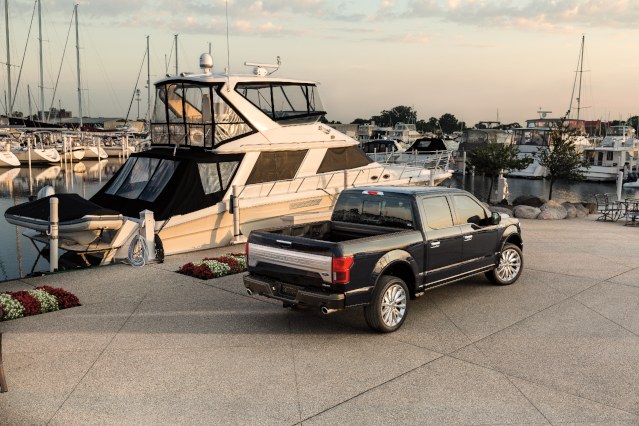 An all hauling all towing four door pickup truck is the epitome of utility and practicality, pick up the kids from soccer and run to the hardware store to pick up the lumber to build the tree house this weekend. The F150 has set the bar for how much this class truck should haul and tow. Both the 3.5 liter twin turbo V6 EcoBoost engine and the 3.0 liter Power Stroke diesel enable F150 to claim the bragging right of heavy weight champ. The Ecoboost is capable of towing 13,200 pounds and the Power Stroke is capable of towing 11,400 pounds both class leading records for Full-Size trucks that weigh under 8,500 pounds. Also considering the impressive fuel economy on these powerful engines its safe to say daily driving this pickup truck can be practical.

A work truck for techies. The F150 tech options are competitive with any vehicle on the market. Along with the 8-inch touch screen plenty of steering wheel controls theF150 has all the goodies you could want in an infotainment system for a road trip and all the connectivity you would need to work on the road, navigation, bluetooth a USB port, Wi-Fi hotspot capability, satellite radio, bluetooth and amazing sound coming from a 10 speaker Bang & Olufsen audio system. 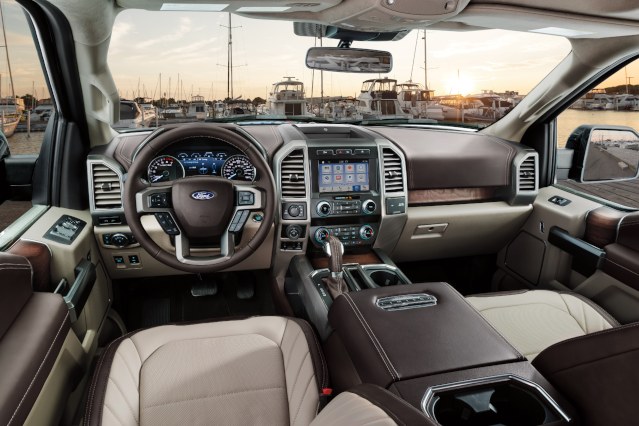 Ford's Sync 3 System allows you to connect your smartphone via Apple CarPlay or bluetooth, also you can use the navigation app Waze on Sync 3 through your iPhone or Android Auto. Alexa can also join you on road trips via Sync 3. Needless to say you'll have nearly all the assistance you need and can control most features through voice commands.

The Insurance Institute for Highway Safety (IIHS) names the Ford F150 as one of the safest pickup trucks. The National Highway Traffic Safety Administration has given the F150 a nearly perfect score.

Ford has provided a powertrain for practically every need if you want fuel economy and superior towing capability you would still be impressed with the strong performance of the EcoBoost V6 Engine motors. Both offer impressive power and satisfactory fuel economy. Acceleration is definitely not limited with either of these smaller motors. Braking in a vehicle that can easily tow over 10,000 pounds is sure to be equipped with a confidence building braking system. The 10-speed automatic transmission is a smooth shifter and easily finds the best gear for every driving situation. The steering ratio for such a large truck is impressive even the most novice drivers could easily maneuver around parking lots with little difficulty. Many consumers are unaware that such large trucks are responsive as the F150 with and without loads.

Regarding off road situations the F150 is a capable of moderate off-road adventures, equipped with the FX4 package you'll have tougher more capable shocks, electronically locking rear differential, hill descent control and a skid plates.

Wether your F150 is a work horse or a luxury land chariot it will have the power you'll need when you need it, you can confidently tow your literal pay dirt or you're water chariot for a day on the lake and launch it with precision with the trailer assist cameras.

The base model is the only model paired with a 6-speed automatic transmission, this model gets and EPA estimated 19 mpg city and 25 mpg on the highway this is better than most full-sized pickup trucks. Incredibly the 3.5 liter twin-turbo V6 engine paired with a 10-speed automatic transmission which is now standard on the F150 Limited model receives an estimated 18 city and 25 highway. The 3.0 liter Power Stroke Turbo Diesel engine receives an estimated 22 city and 30 highway. This begins to sound more impressive once compared to its competition Dodge Ram 1500 sporting a 5.7 liter Hemi which is estimated to get 15 city and 22 highway. It is almost impossible to believe the smaller slightly more fuel efficient V6 engine tows 450 pounds more and hauls 970 pounds more and can maintain impressive fuel economy.

Up the ladder to a XLT with a SuperCab with equipped with Fords Sync 3 + Ford Pass Connect, Power Equipment Group and chrome front and rear bumper the MSRP including destination is $38,665.

Moving on to the next model the popular F150 Lariat with upgraded leather trimmed seats' unique front grille and wheels, Intelligent access and push-button start will bring MSRP and destination to $43,295.

The King Ranch model with supercrew cab, a 5.0 V8 engine with Flex Fuel capability, a two-tone paint scheme with stone grey as the lower accent and a premium Bang & Olufsen 10 speaker audio system will cost $54,285 including destination.

The F150 Platinum will also have the B&O audio system, it does receive additionally unique genuine wood interior trim accents and voice activated navigation which bring the cost to $56,515 (including destination).

Last and certainly not least the F150 Limited donning the same High Output monster of an engine pumping out 450 horsepower and 510 lb-ft of torque with an upgraded twin panel moonroof will bring cost including destination to $68,730.

Compared to the competition the F-Series and the F150 offer great value and stack up well to the competition price wise. As mentioned in the fuel efficiency segment the Dodge Ram 1500 tested was priced one thousand dollars cheaper in cost despite underperforming in the fuel efficiency category. If its fuel economy, power, towing and hauling capability, safety and technology, trim options and packages the F150 competes in every category and leads in quite a few of them.