A two-door coupe or convertible. 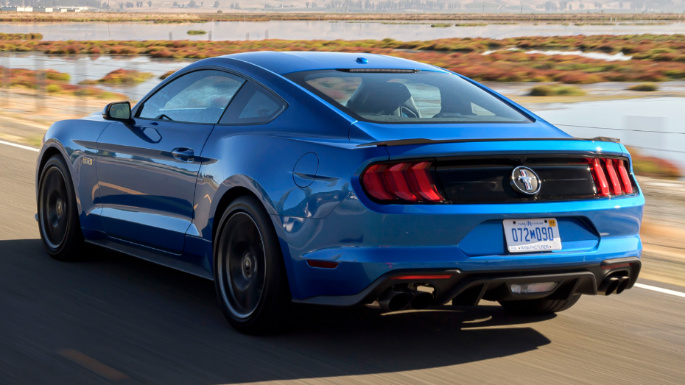 The Ford Mustang is one of the most iconic American cars and part of a long-running line of coupes and convertibles.

Primary competitors are the Chevrolet Camaro and Dodge Challenger, however, the Mustang also rivals some premium-branded vehicles such as the Audi A5, BMW 4 Series, Mercedes-Benz C-Class, and the Porsche Boxster and Cayman, among others.

For 2020, the Mustang gets some new wheels and exterior paint choices. Magnetic ride adaptive dampers are now included in the Handling Package for models with the turbocharged, 2.3-liter engine. 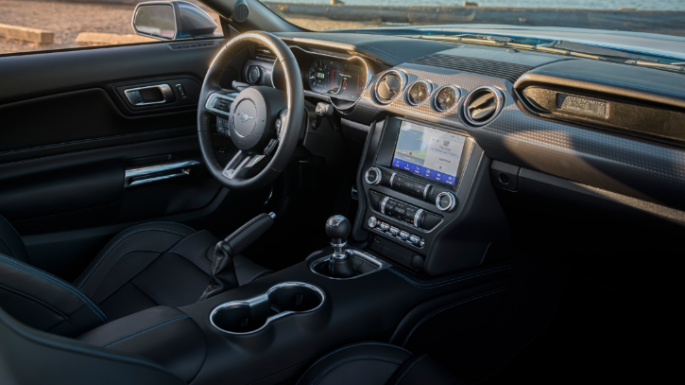 The Mustang is available with a Safe and Smart package that bundles adaptive cruise control, lane departure warning, automatic emergency braking and forward-collision warning, and rain-sensing wipers – all features which are still somewhat unusual among this Ford’s American rivals. But it’s only available on Ecoboost and GT models of the coupe and convertible, leaving the more expensive, high-performance models without access to these driver assistance technologies. Nearly every version of the Dodge Challenger offers these features as an option, and the European competition offers more advanced versions of these systems.

The Ford Mustang received the second-highest rating of Acceptable in the Insurance Institute for Highway Safety (IIHS) small overlap front crash test, but scored well in all other tests. In the same tests, the Chevrolet Camaro scored higher, but the Challenger was rated lower. The National Highway Transportation Safety Administration (NHTSA) gave the 2020 Mustang its top five-star rating in overall tests. 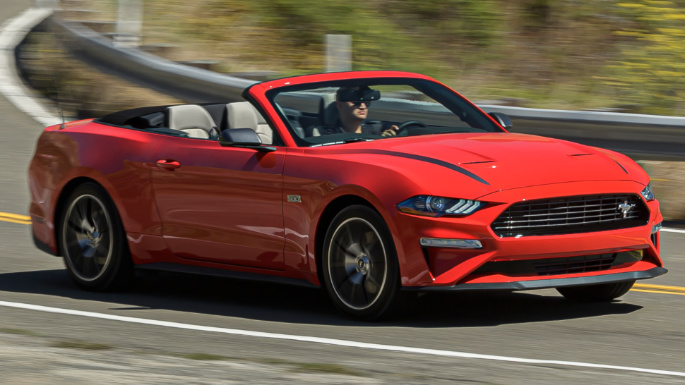 Base Ecoboost coupe models are competitively priced with the Camaro and Challenger, and a bargain compared to an Audi A5 or Mercedes-Benz C 300 Coupe considering the standard horsepower. But it’s sparsely equipped, so an Ecoboost Premium at around $33,000 is the best bet, with leather upholstery and larger wheels. Convertibles add about $5,000, though, and V8 models can easily touch $50,000 with some desirable option packages.

High-performance GT350 and GT500 have high-level performance for a relative bargain, competing well with models from AMG and Porsche that can still cost at least $10,000 more to start. Just don’t expect German levels of refinement in the way they drive or the interior quality. Despite the available performance and amenities, Mustangs make most sense below $50,000. 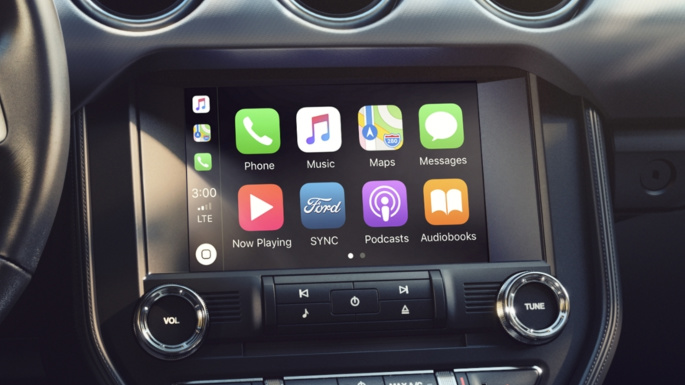 Unusual for the class, features like ventilated seats and a fully digital, 12-inch TFT configurable instrument cluster are available on the Mustang, even for below $40,000. Magnetic adaptive dampers are also unusual for a vehicle at this price, but even the base model can be equipped with them. The FordPass Connect system also comes on the Mustang, which allows control over basic vehicle functions – locks, engine start, fuel status – as well as the ability to pay for fuel or parking from a smartphone app. Apple CarPlay and Android Auto are optional on base Ecoboost and GT models, but standard on models equipped with the Sync 3 touchscreen.

Not all of that tech is well-sorted, though. The gauges can be a little gimmicky considering the information that is actually presented, and it could take some time flipping through menus and personalizing settings to make it display all of the information that’s necessary at a given time. Ford’s Sync 3 infotainment system has some large icons and is mostly responsive, but not everything is well organized. Chevrolet and Dodge offer better systems for similar money. 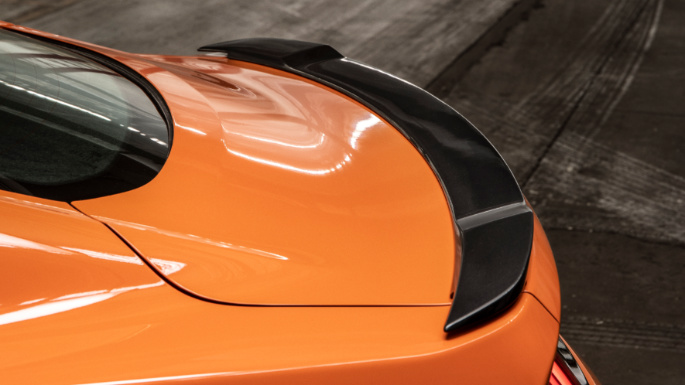 Even though it has four seatbelts, the Mustang is a four-seater in name only. Deeply sculpted rear seats and a sloping roof make the coupe cramped, even for kids. Convertibles are only slightly better with the roof off, even though it’s among the more spacious four-seat convertibles on the market. Coupe buyers looking for a usable rear seat will be much better served by the Dodge Challenger, while convertible shoppers may find the Audi A5 a better bet for a rear seat that’s remotely adequate for adults. In fact, the rear seat is best used to expand cargo space.

The Mustang coupe’s trunk is smaller than the Challenger’s by a good margin but holds far more than the Chevrolet Camaro’s, and cargo space about the same as the German coupes. It’s also about what most compact sedans offer. But the shape is slightly odd and liftover high, meaning it’s awkward to load some items such as suitcases. 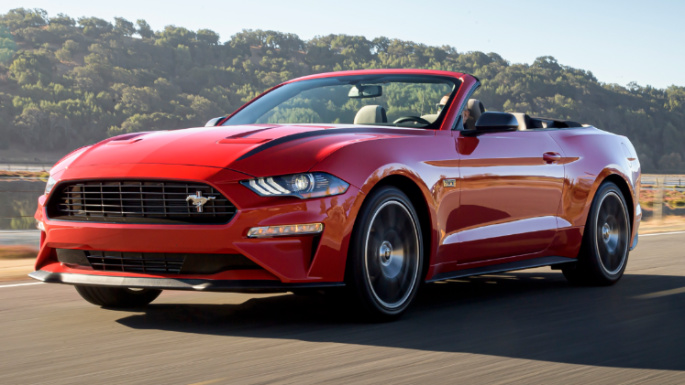 Part of the Mustang’s appeal lies in its exterior appearance, with plenty of nostalgic cues from the 1960s and ‘70s models. There are numerous packages to heighten that nostalgia, too. And the Bullitt Mustang coupe is perhaps the biggest nod to the ‘60s and a Steve McQueen era, with its trademark dark green exterior paint and blacked-out trim. Inside, there’s also a blend of old-and-new, with digital instruments and a large touchscreen between toggle switches and a traditionally styled Mustang dashboard. That does some to mitigate the fact the interior materials are fine at $30,000, but not that substantial for a $50,000 car.

Part of the Mustang’s compromises lie in that it gives up plenty of practicality in the name of style. The front seats are low, but the windows are short, and the door sills are high, meaning not all drivers may find a truly comfortable position. The sloping roof on the coupe impedes headroom for anyone trying to get into the back seats, while the convertible has large blind spots with the top up. These design issues are inherent to the coupe and convertible body style, and while they may not matter much in a straight line, they do make urban traffic and parking maneuvers trickier. 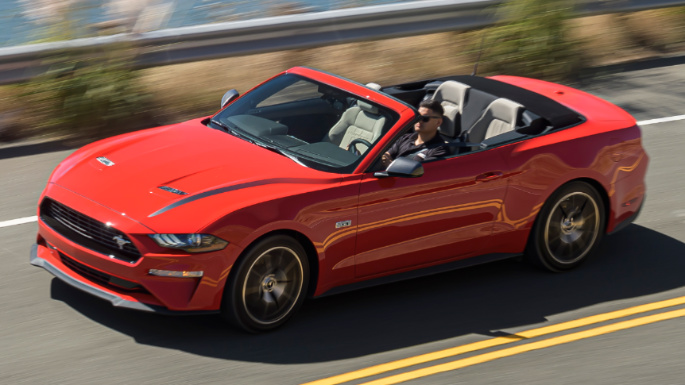 The Mustang is more agile than the Dodge Challenger, and likely neck-and-neck with the Chevrolet Camaro, making it convincing as a sports car. All of its performance versions neatly match up with the Camaro, too, but the Mustang also boasts novel features such as expensive dampers and a limited-slip differential on more powerful models. A Porsche Cayman may still run away from the Mustang in the corners, but it’s not as one-sided of a fight as it may have been in the past. Watch for the ride on models with stiffer suspension and big wheels, though. 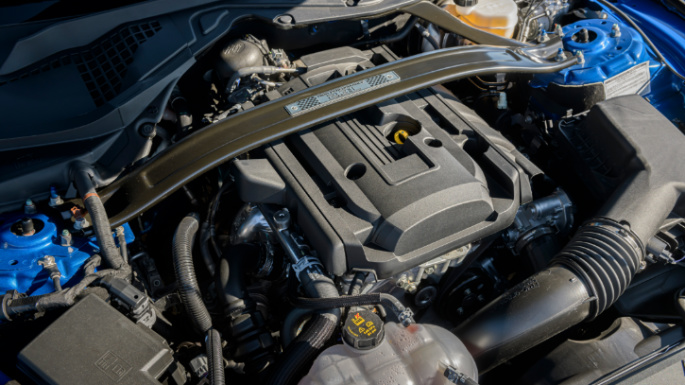 The four-cylinder 2020 Mustang Ecoboost with the optional 10-speed automatic transmission is rated at 21 mpg city, 32 mpg highway, and 25 mpg combined by the EPA. The standard six-speed manual drops the highway rating to 30 mpg and the combined to 24 mpg.

Convertibles and the Bullitt model drop fuel economy by roughly 2 or 3 mpg.

The automatic-equipped Ecoboost coupes are relatively fuel-efficient, given the performance on offer, and the GT variants are also competitive with corresponding models from Chevy and Dodge. However, the Europeans are slightly more efficient when it comes to the high-performance variants, and their turbocharged six-cylinder engines may mean lower fuel bills. As an everyday driver, however, only the Ecoboost models make much sense from an efficiency perspective. 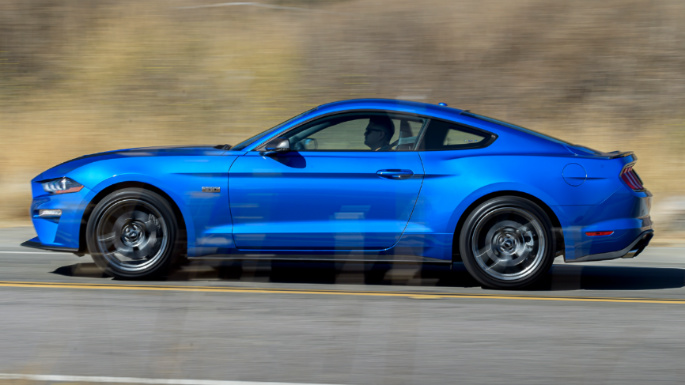 The Ecoboost Premium Fastback starts at $32,880, with the convertible starting at $38,380. It adds leather upholstery with heated and cooled front seats, power adjustments for the front seats, Sync 3 with Apple CarPlay and Android Auto, dual-zone automatic climate control, and rear parking sensors.

In addition to the High Performance, Handling, and Safe and Smart Packages, the Ecoboost Premium also offers 201A Equipment Group. That includes the 12-inch digital instrument panel, a heated steering wheel, built-in navigation, blind-spot monitoring, and memory settings for the driver’s seat and exterior mirror positions.

The Mustang GT Fastback starts at $37,075. It adds to the Ecoboost Fastback the 460-horsepower, 5.0-liter V8 engine, 18-inch wheels, dual exhaust, and a limited-slip rear axle.

The Mustang GT Performance Package adds 19-inch wheels, Brembo brakes, and a raft of upgraded suspension components. Performance Package Level 2 adds even more upgraded suspension and braking components, as well as the magnetic ride dampers. Recaro cloth sport front seats are available as a standalone option. The Safe and Smart Package is also available, while the 301A Equipment Group includes features such as Sync 3 with Apple CarPlay and Android Auto and dual-zone automatic climate control.

The Mustang GT Premium Fastback starts at $41,075 MSRP, and the GT Premium Convertible from $46,575. It adds to the Mustang GT features that mirror that of the Ecoboost Premium, such as the leather upholstery, heated and cooled front seats with power adjustments, and Sync 3.

Equipment Group 401A is similar to 201A on the Ecoboost Premium, including the 12-inch digital instrument panel and navigation, among other features. The performance packages, Safe and Smart, and various wheel and trim choices are also available.

The Mustang Bullitt Fastback starts from $48,900. It adds 20 horsepower to the 5.0-liter V8 for a total of 480, as well as Bullitt-specific exterior design cues, two color choices, 19-inch wheels with a distinctive design, 12-inch digital instrument panel, heated steering wheel, upgraded upholstery, and interior trim, power driver’s seat, heated and cooled front seats, and upgraded brake and suspension components. A six-speed manual is the only transmission.

The Shelby GT500 starts at $74,095 MSRP. It swaps in a supercharged 5.2-liter V8 with 760 horsepower, as well as a 7-speed dual-clutch automated transmission in place of the six-speed manual. As well as various exterior trim changes, it also adds 20-inch wheels and leather-trimmed front sport seats.

A lightly optioned Ecoboost Premium model is the best choice for a modestly priced coupe or convertible that boasts some creature comforts, while leaving money in the budget for the Safe and Smart and Handling packages, making for a Mustang that’s fun to drive and also has some modern technology.

If a V8 is a must, stick to a GT with some performance and handling upgrades that keep the price below $50,000. Any higher and the Mustang starts competing against more well-rounded performance cars.