Powertrain: The base engine is a 2.0-liter naturally-aspirated four-cylinder, with 158 horsepower and 138 pound-feet of torque. It's paired to a six-speed manual transmission or a CVT gearbox.

Higher trims come with a turbocharged 1.5-liter four-cylinder engine that makes 174 horsepower and 162 pound-feet of torque. It too is paired with a CVT.

The Civic Si also has a 1.5-liter turbo-four, but it makes 205 horsepower and 192 pound-feet of torque. It's paired with a six-speed manual transmission 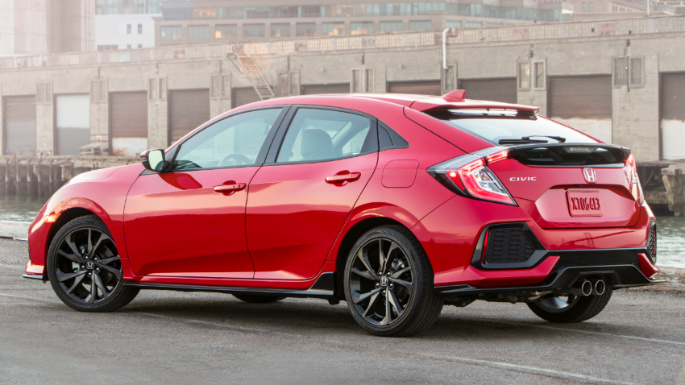 The Honda Civic has been a popular, reliable, practical, and fun-to-drive compact car in the U.S. market for over 40 years. Since 1972 it has gone through ten generations, with 2017 being the start of the tenth generation.

This generation has received accolades from numerous consumer rating and automotive review sources, a lot of which is owed to the Civic still maintaining its status as being a versatile car to a wide chunk of the consumer market.

This tenth generation has lasted from 2017 to 2020 and has seen a few changes to exterior aesthetics, tech availability, and even minor performance upgrades for the Si trim.

It has great technology features to keep it relevant, as well as a worthy opponent to its very-stiff new-car competition. The Mazda3 and Toyota Corolla are its main rivals, followed by the Kia Forte, Chevrolet Cruze, Nissan Sentra, Hyundai Elantra, and Ford Focus.

This generation Civic is a substantial change from the previous, ninth-generation, which ended in 2016. Both the 2.0-liter and turbo 1.5-liter engines are brand-new to the U.S. and world markets, and this is the first time in a while that a hatchback version has graced our shores.

Visually, the ninth and tenth generations look quite different from each other as well, plus the tenth generation boasts substantially better fuel economy over the previous.

The turbocharged 1.5-liter four-cylinder engine is equipped with Honda's Earth Dreams technology, which uses clever engineering to deliver impressive fuel economy and power for its tiny size. This engine can be mated up to a six-speed manual or CVT automatic transmission, as well as a 2.0-liter, naturally-aspirated four-cylinder, which is the base engine in the LX sedan trim.

The tenth-generation Honda Civic's large variety of body styles and hierarchy of trim levels ensures there's something in the lineup for a huge variety of consumers. Choices include a two-door coupe, four-door sedan, and five-door hatchback. 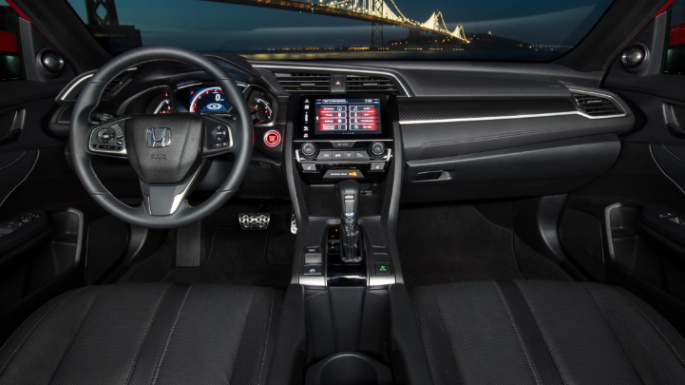 The 2017 Civic earned a five-star crash test rating from the National Highway Traffic Safety Administration (NHTSA) and was also named a Top Safety Pick by the Insurance Institute for Highway Safety (IIHS). Among the IIHS' findings, it earned a "Good" in the Rear Crash category, a "Good" in Front Moderate Overlap, a "Good" in Overall Side Crash, and a "Good" in Roof Strength for rollover. The only area where it didn't score so high was for its headlights, which earned a "Poor" rating.

This compact offers a great selection of available driver-assistance technology known as the Honda Sensing suite of driver aids. These include automatic emergency braking, lane-departure warning, forward collision warning, adaptive cruise control, and a rearview camera, which all add to this compact's ability to eat up highway miles and increase situational awareness on the road.

Automatic emergency braking is similar to collision warning on competing brands' offerings. Sensing is an optional extra on the LX trim, whereas LaneWatch is also a cool feature, which displays a camera view of the right-rear quarter when the turn signal is flipped to the right position. Otherwise, reviewers found all models to have very minimal blind spots.

The Civic's basic safety features are extensive, which makes it stand out against the majority of its competition by other brands. Each model rolls off the production line with Dual Front Side-Mounted Airbags, Front And Rear Head Airbags, Stability Control, Emergency Braking Assist, and Passenger Airbag Occupant Sensing Deactivation. 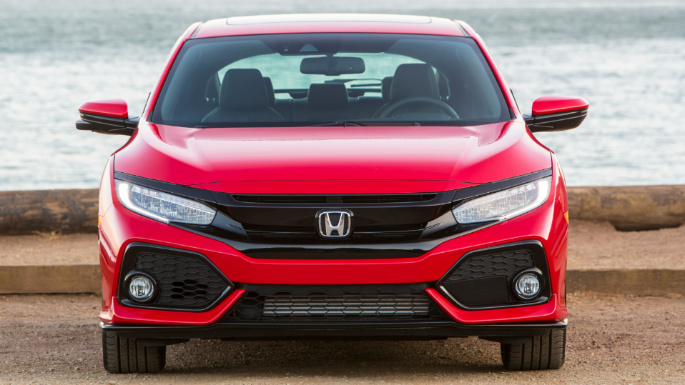 The Civic is a good value due to its fuel economy, technology, safety features, and moderate price. Competing compacts by Chevrolet, Ford, and Nissan are priced lower, but just barely, and don't offer as many convenience or tech features. The Civic also has more power and better fuel efficiency than almost all of the competition, with the Si lacking in power up against the VW GTI and Ford Focus ST.

Thanks to available visual and handling enhancement options, the Civic might be the best-looking of the lot as well, and reviewers agree, especially when it comes to the styling accents and bigger wheels found on the Honda Civic Si. 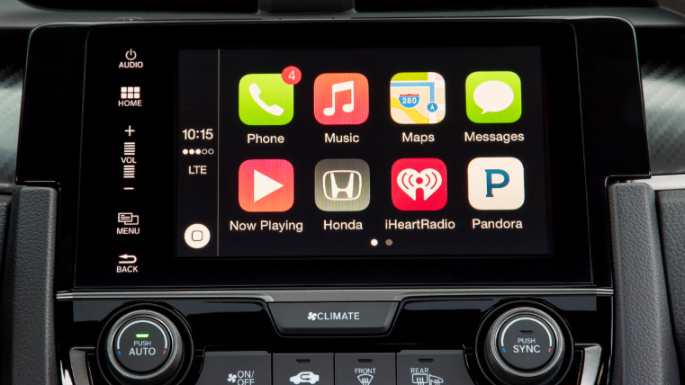 In addition to its suite of Honda Sensing driver-aid features, the 2017 Civic offers a good variety of tech to stay competitive within its segment.

Every 2017 Civic trim comes with Bluetooth audio and phone connectivity standard, at least one USB port, and additional audio controls on the steering wheel. The 5.0-inch touchscreen system is very good, though there is no satellite radio, Android Auto, or Apple CarPlay available on lower trims. To have these convenient tech features as standard, consumers might opt for the Sport Touring model, which is tech-laden and retails for $29,175.

For consumers after excellent audio quality, the top-of-the-line Si trim comes with a 450-watt audio system with a subwoofer as standard.

Reviewers found the touchscreen to be responsive and easy to use, though unfortunately, there is no physical volume knob. 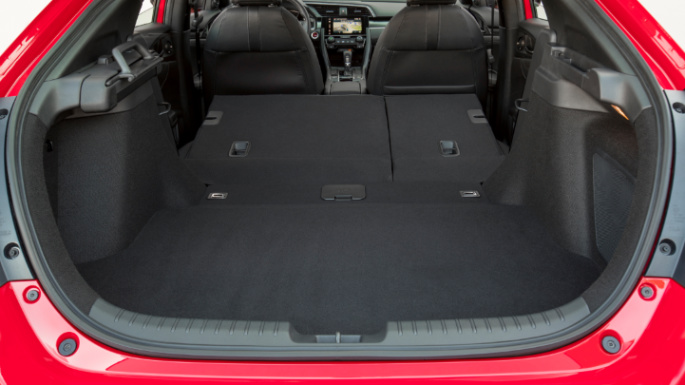 The cargo room in the 2017 Honda Civic is among the best-in-class, whether it's the sedan, coupe, or hatchback body style.

The Civic hatchback and sedan are the roomiest of the lot, with space for five passengers between their doors and an impressive 15.1 cubic feet of trunk space in the sedan, and a massive 46 cubic feet in the hatchback with the rear seats folded down.

The Civic is also generally spacious for occupants. Front headroom measures in at 39.3 in. on sedan and hatchback models, though only 36.5 inches in coupe models. Front shoulder room is right around 57 inches across the board, while the front legroom comes in at 42.3 inches. Backseat passengers experience a bit less: front headroom measures in at right around 37 inches for hatchback and sedan models, while it decreases significantly to 34.5 inches in coupe models.

The Civic doesn't stop there with practicality. In addition to its good cargo capacity, good tech, and thrifty fuel economy, reviewers noted that the convenience of dropping the rear seats, adjusting the front seats, and generally conforming the interior to one's needs was quite good.

This all comes together to make a multi-purpose, do-it-all commuter that's a nice place to be while stuck in traffic, hauling the family around, enjoying a road trip, or carving some fun canyon roads. 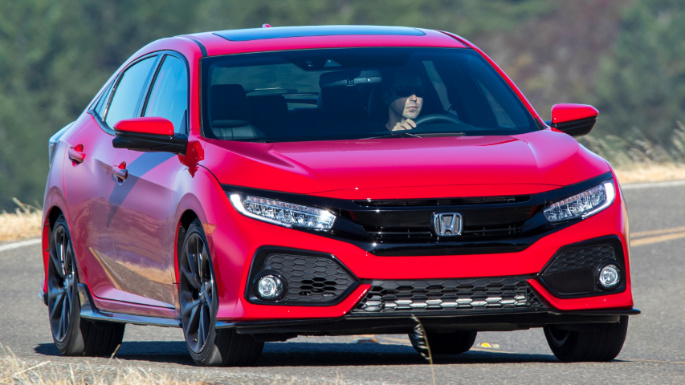 While the base Honda Fit LX and EX trim maintain their price-point with basic alloy wheels and other thrifty, economy car design, sporty styling is refreshingly common on the Sport hatch and Si trims. The Si comes with stylish 18" wheels and a handful of exterior accents, such as fog lights, a sharp spoiler to balance out its lines, and a chrome center exhaust tip. 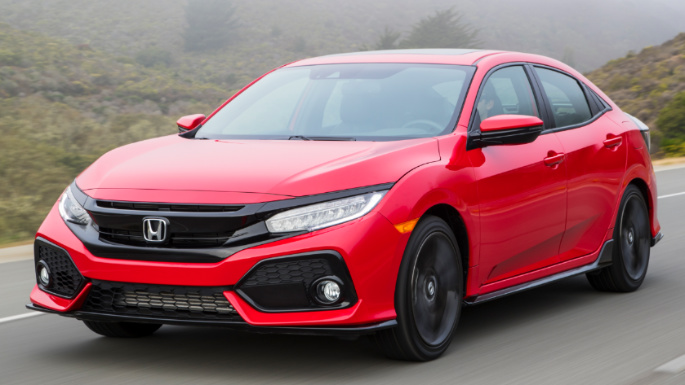 The 2020 Honda Civic has a good power-to-weight ratio compared to other cars in its class. Ranging in weight from 2,751 pounds to 2.906 pounds, and having as much as 205 horsepower with 192 pound-feet of torque on tap, it's a capable, fun car, with the Touring and Si being the quickest.

Combine that with a slick-shifting six-speed manual gearbox, good suspension engineering (fully independent suspension all around, which means better grip and handling), and even an optional Honda Factory Performance (HFP) Package available on the Si trim, and it will provide an impressively-fun driving experience for the price. This HFP package isn't just for handling, either; it helps the Civic Si look the part as well with various exterior accents and bigger, 19" wheels.

When equipped with the manual transmission, the most-powerful 2020 Civic Si jumps to 60 MPH from a standstill in 6.5 seconds, which is on-par with its sport compact competitors, such as the Ford Focus ST and Volkswagen GTI. It's also among the lightest at 2889 pounds, which helps with acceleration, braking, and fuel economy.

Its enthusiastic driving experience doesn't end in a straight line, however. Adaptive dampers can be stiffened up at the touch of a button, plus stiffer spring rates and thicker anti-roll bars ratchet up the fun-factor on twisty roads as well.

It also has great traction and grip, thanks to a helical limited-slip differential. This helps with traction on twisty roads, as well as less-than-ideal conditions such as rain and snow.

Lower trims aren't as fast, but still put down respectable times when sprinting to 60 MPH. Manual transmission-equipped 1.5-liter turbo models take 7.5 seconds to reach 60 MPH, whereas those with the 2.0 naturally-aspirated engine hit the mark in 6.8 seconds. This is significantly faster than the competition: the Mazda3 sedan takes 7.8 seconds, the Hyundai Elantra takes 8.4 seconds, and Toyota Corolla hits it in 8.5 seconds.

The non-Si trims hold their own on the skidpad, too. Reviewers were able to achieve 0.88 Gs on the skidpad with a manual-transmission Honda Civic Sport hatchback. Reviewers recorded a quite-impressive 0.97 Gs with the Si, which beats the VW GTI's 0.95 Gs.

Driver inputs go behind the wheel are good. All Civic body styles and trims have a lower, more set-in driving position (though with good visibility), with good pedal feel, light steering with great feel, and manual-equipped models have light-yet-positive shifter engagement. 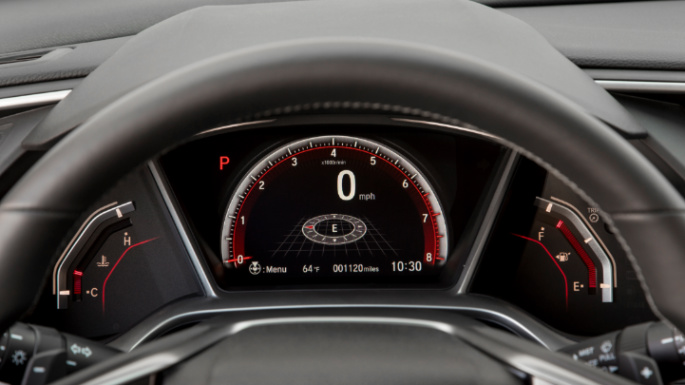 The Civic's fuel economy is one of its best characteristics. The turbocharged 1.5-liter four-cylinder engine, with Honda's patented Earth Dreams technology, can achieve as much as an EPA-estimated 42 MPG highway in the EX-T equipped with the CVT or six-speed manual transmission. City mileage is almost the same, with the CVT achieving 32 MPG and the manual achieving just a hair less, at 31 MPG.

Models equipped with the 2.0-liter, such as the Civic sedan LX, naturally-aspirated four-cylinder can reach 40 MPG highway and 31 MPG city with the CVT transmission. The manual has the same highway mileage, though as little as 28 MPG city, which is still pretty good compared to the competition. 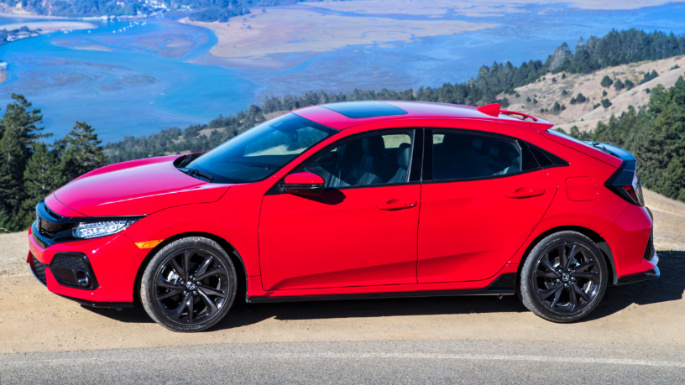 Up next is the EX Sedan/LX-P Coupe/Sport Hatchback, which come in around $21,400, comes with everything in the trim LX, plus a sunroof, remote engine start, smart key entry, and push-button start are standard. With this trim, consumers can expect a 7-inch infotainment system with Apple CarPlay and Android Auto, and satellite radio.

Coming in above these is EX-T Sedan and Coupe, and EX Hatchback. These come off the assembly line around $22,300. This trim is a mild upgrade, with dual-zone climate control, 17" alloy wheels, and other mild visual and convenience upgrades. The EX-T also includes Honda's Sensing suite of driver aids, which, as we mentioned above, is impressive, especially for this price-point.

The EX-L Sedan and Coupe, and EX-L Navi Hatchback kick in a nice handful of luxury features starting at $23,800. Unfortunately, the six-speed transmission is no longer available, though an automatic-dimming rearview mirror, heated front seats, eight-way power-adjustable driver's seat, and leather-trimmed surfaces throughout. Honda Satellite-Linked Navigation System with Voice Recognition are optional.

Filling in the enthusiast segment is the Si Sedan and Coupe, which start at $23,900. At this price point, consumers get much of what offered in the lower trims, as well as the Civic's most powerful specs: 205 horsepower and 192 lb.-feet of torque. The only available transmission is the six-speed manual.

The 2017 Honda Civic is a solid value for the money. With good standard tech, a comfortable interior, great cargo room, class-leading fuel economy, fun driving dynamics (especially in the Si trim), this is sure to be a comfortable, flexible compact that can tick off the miles on the highway, serve as a comfortable and safe daily commuter, and return near-diesel-like fuel economy.

Plus, it makes owning a small car a tad easier in 2020 with its excellent smartphone connectivity. Especially once the base LX trim is surpassed for any of the trims equipped with the turbocharged 1.5-liter four-cylinder engine, great torque, great fuel economy, and the ability to add a bit more enthusiasm to the average A-to-B trip. Plus, a ton of capability exists between the lugnuts of the Si; its suspension, power, and low weight make it a total blast on a twisty road.