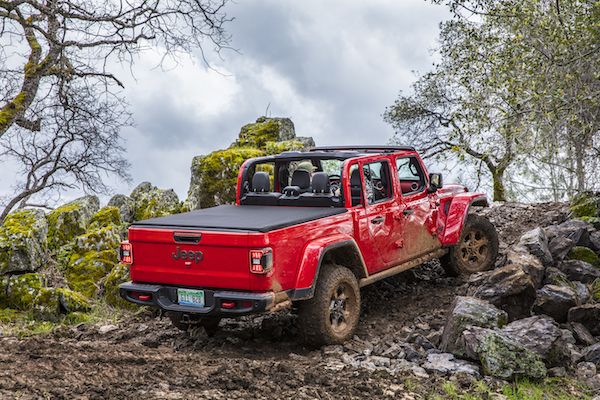 The Jeep Gladiator is an all-new model from Jeep for the 2020 year. It’s essentially a midsize pickup truck version of Jeep’s Wrangler Unlimited (the four-door model).

Thus the powertrain under the hood, the suspension components, the entire interior and most of the aluminum body panels are all common to the Wrangler.

The Gladiator is a four-door model and it has a five-foot-long bed. Unlike any other truck on the market (but like all current Wranglers) owners can use a small wrench to remove the doors, roof (regardless of whether you buy the soft top or the hard top) and even fold the windshield. This gives you the option of the near-convertible experience of the Wrangler with the added utility of a truck bed behind you.

There are four main trim levels of the Gladiator: Sport, Sport S, Overland and Rubicon.

There’s also a limited-edition Launch Edition model that originally sold for $62,310, though all 4,190 copies sold out within a few days of being offered in April 2019.

All Gladiators use the same excellent powertrain that Jeep uses throughout much of its vehicle lineup. The engine is a 3.6-liter V6, which makes 285 horsepower and 260 pound-feet of torque.

It’s paired with a standard six-speed manual transmission on all trim levels. An eight-speed automatic transmission is a $2,000 option. 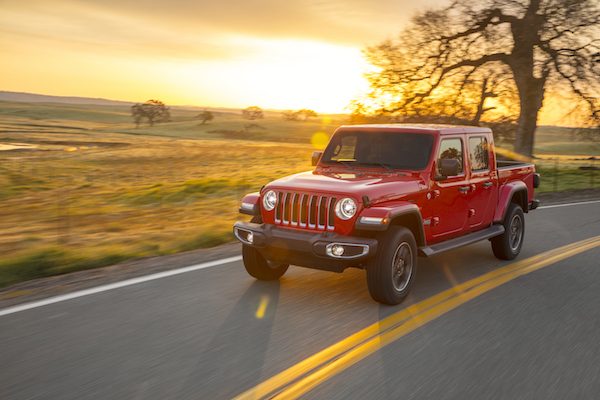 A part-time 4WD system is also standard on all Gladiators, though the pricier versions get a more sophisticated setup better suited to rugged off-roading.

Jeep is also planning to release a 3.0-liter diesel EcoDiesel V6 version of the Gladiator. It’s expected to make 260 horsepower and 442 pound-feet of torque and it will come exclusively with the eight-speed automatic transmission.

Silky smooth powertrain. Jeep (and its parent company FCA) uses this truck’s 3.6-liter V6 on nearly every vehicle it sells so you know it’s going to be a good one. We loved its combination of power and refinement in every situation we threw at it -- on or off-road. Plus the eight-speed transmission on our test model was equally impressive.

It’s a Jeep! One of the Gladiator’s key advantages over other mainstream midsize trucks is its Jeep-ness. Want the doors off? Unscrew a few bolts on each and you’re set. The roof? Hardtop or soft top, it’s removable. Heck, you can even fold down the windshield if you like. Basically, the Gladiator offers the open-air experience that Jeeps are legendary for, with the added functionality of a bed in the back. This was awesome -- and nothing else can match it. 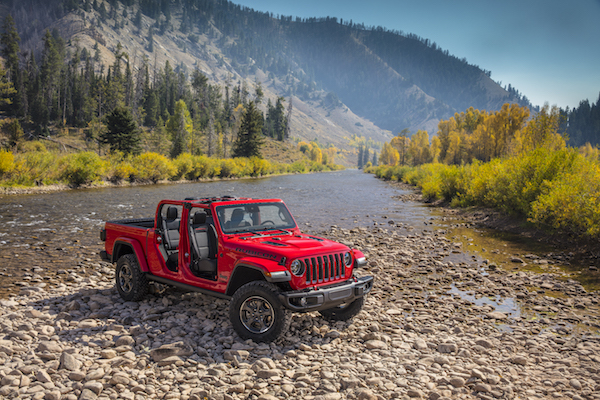 Resale value. Thanks to a loyal following of Wrangler enthusiasts and the Gladiator’s aforementioned uniqueness, this truck is already expected to have a high resale value. That’s good for shoppers now because it means great lease deals and it means those who buy can count on getting a strong return on their dollar.

TLDR: Gets expensive, noisy, hard to see out of.

Gets expensive. The Overland trim that we tested was $55,000 and while it was well-packed with features, none of them felt particularly special enough to justify that amount of money -- they were each the kind of thing that you’d expect on any midsize truck these days. And this wasn’t even the Rubicon off-road model.

Visibility. Our test model had the optional hardtop roof, but regardless of which roof you choose on the Gladiator, prepare for some massive blind spots behind the rear passengers’ shoulders. This made freeway driving a bit hairy as you had to take extra care in changing lanes. So make you sure you test drive the Gladiator on the freeway to know what you’re signing up for.

Wind noise. One look at the Gladiator’s steep windshield should tell you to prepare for quite a bit of wind noise inside the cabin. The driving experience meets those expectations. Highway driving can, therefore, be a bit tedious as the truck can feel less refined than some of its competitors (especially Ford’s Ranger). It’s not a deal-breaker but something to consider when you’re on that test drive. 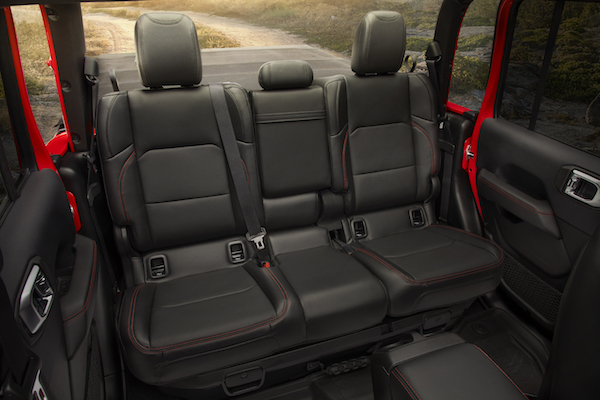 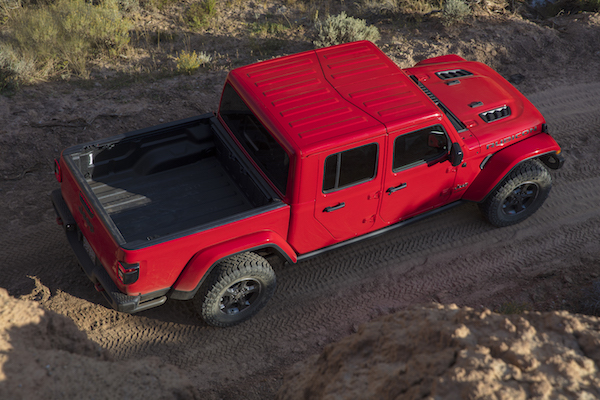 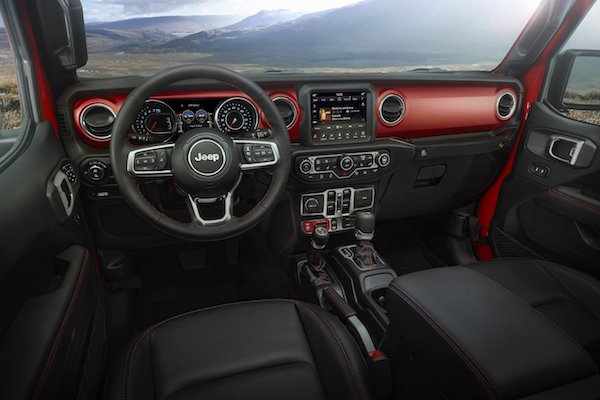 The base Gladiator Sport starts at $35,040, including a considerable $1,495 charge for destination.

The Gladiator Sport S starts at $38,240 (including destination). It adds to the Sport 17-inch alloy wheels, power windows/door locks/heated mirrors and keyless entry.

The Gladiator Rubicon is the off-road-ready top dog of the Gladiator family. Starting at $45,040 including destination, this off-road oriented trim adds a more sophisticated four-wheel-drive system and suspension with Fox shocks, 33-inch tires and unique body modifications. 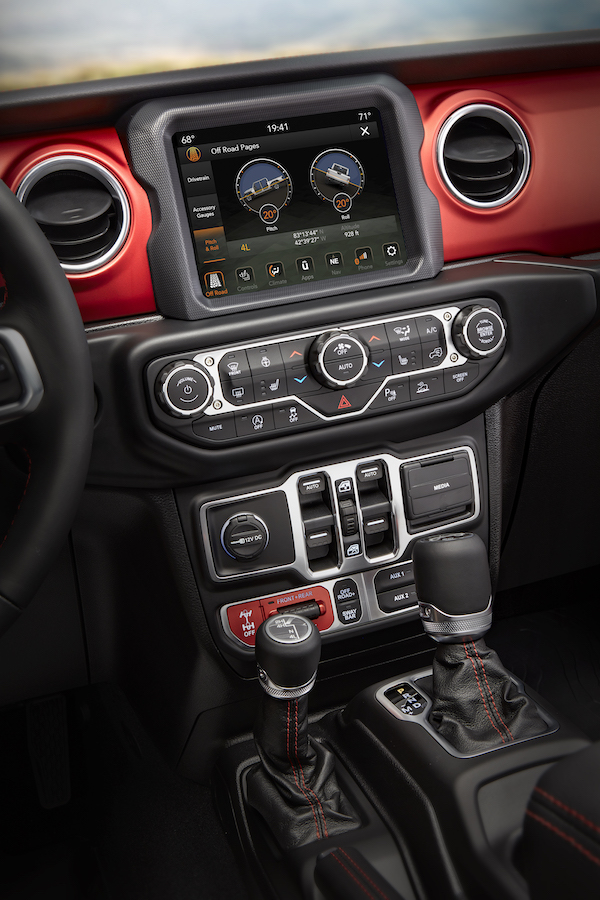 The Gladiator competes in a tough midsize truck market with some formidable rivals.

Our favorite in this segment is the Ford Ranger; it’s refined, offers a strong and efficient turbo four-cylinder engine and is a great daily driver no matter how often you’re using the bed.

Toyota’s Tacoma is an icon in this segment and another model that we heartily endorse. It feels a little more rough around the edges than the Ranger but its reliability is bombproof and they last forever.

Chevrolet's Colorado and its cousin the GMC Canyon are also fine but generally can’t match the Toyota or the Ford.

Nissan’s Frontier is ancient at this point but it does offer great value for budget-minded shoppers.

Honda’s Ridgeline rides on a unibody platform (similar to crossovers) which gives it more interior space and a significantly more refined driving experience but some buyers may find it doesn’t quite have the street cred of the other trucks.