The GMC Sierra 1500 is the mechanically identical vehicle to the Chevrolet Silverado; both are full-size pickup trucks made by General Motors and both vehicles have remained virtually the same throughout their shared history.

The GMC Sierra has typically been the more upscale of the two models, offering interior and exterior features not found on the Silverado. It nearly all applications, the Sierra has a base V6 and optional V8 engines though newer models now offer a turbocharged four-cylinder as well. Rear-wheel-drive is standard and four-wheel-drive is optional. 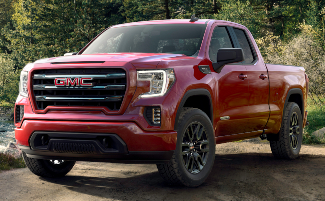 The new fourth generation Sierra 1500 was introduced in early 2018 and had some unique features from the otherwise identical Silverado. Unique options include a two-piece tailgate, a carbon fiber pickup bed, open-pore wood grain trim on the interior ad eight-inch color touchscreen infotainment system.

While the Sierra's exterior styling is unique from the Chevy Silverado's, much of the design of the interior is nearly the same.

The Sierra comes with a base 4.3-liter V6 engine that makes 285 horsepower and is paired with a six-speed automatic transmission.

A new 2.7-liter turbocharged four-cylinder engine joins the lineup; it makes 310 horsepower and is hooked up to an eight-speed automatic transmission.

Two V8 engines are optional. The first is a 355-horsepower, 5.3-liter V8 with a six-speed or optional eight-speed automatic transmission.

The second is a 420-horsepower, 6.2-liter V8 that's paired with a ten-speed automatic.

There are several trim levels of the new Sierra, including the basic SLE, the rugged Elevation, the balanced SLT and the luxurious Denali.

For the 2022 model year, the Sierra 1500 got a substantial facelift and new body style. This includes updates to the exterior for a dramatic new design on the front end but also updates to the interior. Every trim level except for the most basic gets a 13.4-inch touchscreen infotainment system with Apple CarPlay and Android Auto as well as a 12.3-inch digital gauge display. The new, high end Denali Ultimate trim level has open-pore wood trim and surfaces wrapped with leather.

In 2022, GMC introduces some new trim levels as well, including the basic Pro, the AT4, the Denali Ultimate, and the heavy-duty, off-road-oriented AT4X.

This model year now has the 2.7-liter four-cylinder as the base engine and the 4.3-liter V6 has been discontinued. Also available is a six-cylinder turbodiesel that puts out 277 horsepower and 460 pound-feet of torque. This diesel engine is rated for towing up to 13,200 pounds.

Perhaps the most important upgrade, though, is the introduction of GMC's Super Cruise on the Denali trim level. This hands-free driving technology uses a huge network of road maps and terrain to allow for assisted driving, even when trailering. While Super Cruise is subscription-based, the purchase of a Denali or Denali Ultimate Sierra comes with three years of the service. 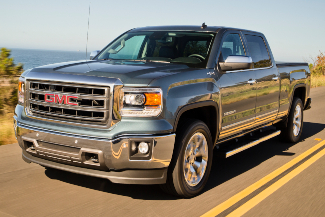 GM dropped the 900 platform for this generation and the Sierra, like other models in this family, was now built on the K2XX platform.

The 6.2 liter was only available on Denali and SLT models and it allowed for a 12,000-pound towing capacity.

Gas mileage for the 5.3-liter in rear-wheel drive only was the best of any V8 pickup of the time, when it was released.

The third-generation Sierra used aluminum in its construction, including on the hood, the engine block and the suspension control arms to reduce weight and use less fuel.

In 2016, the Sierra got its first refresh for this generation. A new grille, headlights and front fascia were added to the exterior and HD Radio was added as well as mobile connectivity for iOS and Android. 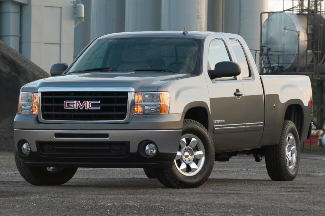 Now built on the GMT900 platform, the second generation of Sierra arrived as a 2007 model. The exterior, interior, frame and suspension were all redesigned, and a few of the available engines got an increase in power.

Like the many GM SUVs built on the same platform, the Sierra had improved aerodynamics for this generation as well. Tighter panel gaps and steeply raked windshields helped improve the fuel economy.

Once again, regular, extended and crew cab versions were offered for this generation. It was also available in both two-wheel drive and four-wheel drive versions.

In 2010, there was a mid-cycle refresh on all models in this family, including the Sierra. Some features included new interior door handles and a new standard six-speed automatic transmission for regular cab trims with the 5.3-liter V8.

Another refresh happened in 2012 for the Sierra 1500 and this one included a redesigned touch-screen navigation system. 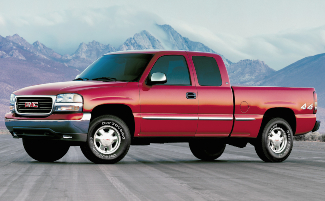 The first generation of Sierra was built on the GM GMT800 platform. As the light-duty version of the Sierra, the 1500 was available in three different cab lengths, including the two-door regular cab, the four-door extended cab and the front-hinged four-door crew cab.

The short box version was only available with the crew cab. In the first year of this generation, only the regular cab and extended cab were offered.

In 2000, a driver's side door was optional for the extended cab.

An upscale version of the Sierra 1500 was also introduced in 2001 and called the Sierra C3. It added a 6.0-liter Vortec 6000 V8 with 325 horsepower. In 2002, the name was changed to the Sierra Denali, which continued to be the upscale trim of the Sierra for generations to come.

In 2004, a crew cab was added to the standard Sierra model. Horsepower for the 5.3-liter engine also increased to 285.