The Colorado is Chevy's popular, mid-size pickup truck. It was first launched in 2004 as a replacement for the S-10 and went on hiatus between 2012 and 2015. It was then that Chevy rebooted the model to compete with the venerable Toyota Tacoma. 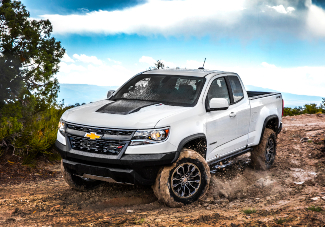 After a brief hiatus, the Chevy Colorado made a comeback in 2015 with a sleeker, redesigned body and three trim levels from which to choose.

The exterior styling is more modern and looks less utilitarian compared to its predecessor.

This generation of Colorado is available with either a 2.5-liter Ecotec Inline four-cylinder engine or a 3.6-liter V6 engine that makes 305 horsepower and 269 pound-feet of torque. Chevy incorporated several fuel-saving features into this Colorado, including aero shutters in the grille that reduce drag and direct-injection.

Inside, Chevy gave the Colorado's a noticeable upgrade. The center stack, for example, is improved and there's much more passenger space. The quiet, refined cabin, comfortable seating and plenty of convenience features are aimed at luring in buyers who previously owned family crossovers.

The second-generation Colorado is about two inches longer than before to 212.5 inches total. It's now 74.3 inches wide and it varies in height between 70.4 and 70.7 inches. The bed varies in length between 61.7 inches and 74 inches, depending on which model you choose.

The curb weight has gone up to 3,960 and 4,180 pounds, depending on the cab size, powertrain and bed length. It has 45 inches of front legroom and 41.4 inches of headroom.

For serious, off-trail use, the ZR2 takes things one step further. It adds an off-road appearance package, retuned suspension with a sophisticated damping system and a wider track and greater ground clearance.

For 2021, Chevy gave the Colorado a minor update, with subtle changes on the trucks' front and rear design as well as additional upgrades to the off-road ZR2 version. 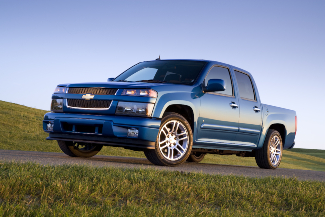 Chevy sold the first generation of the Colorado from 2004 to 2012. When it was introduced as the S-10's replacement, the Colorado had little in common with its predecessor apart from the fact that it was built on a ladder frame and had four wheels. It was slightly larger than the S-10 and flaunted a more contemporary and refined design.

Under the hood was a 2.8-liter inline four-cylinder engine that made175 horsepower and 185 pound-feet of torque.

Chevy also offered the Z71 package on its four-door models. This option featured a 3.5-liter, inline five-cylinder engine that made 220 horsepower and 225 pound-feet of torque.

The first generation Colorado also offered choices of a five-speed manual transmission or a four-speed automatic transmission that included a snow mode.

Additionally, four-wheel-drive versions had a new two-speed transfer case which could be controlled electrically from the dashboard, giving you shift-on-the-fly capability from two-wheel high range to four-wheel high range and back.

The Chevy Colorado fulfilled the Goldilocks factor with regard to size - it was small enough to fit into your garage and big enough to handle heavy tasks.

Two extra-deep bed lengths were introduced and both featured two-tier loading and a total eight tie-downs.

Standing about three inches higher and with a wheelbase of around three inches longer than the S-10, this Colorado packed in extra space without much weight gain. Exterior cargo bed length remained the same at 72.8 inches, while the overall truck was 192.8 inches long, 67.6 inches wide and between 64.9 and 65.3 inches high.

Though it was roomier than the S-10 it replaces, this Colorado still featured the same grey plastic panels throughout the interior. Hose-it-out vinyl floor mats and base cloth seating catered to work use (leather is optional).

The Colorado's extended cab removed jump seats and replaced them with front-facing rear seats. Extra space was created by moving the steering wheel and instrument panel forward and longer seat tracks were added.

In 2007, the Colorado got a slight face-lift with design tweaks that included a new grille, new tires and fresh interior and exterior colors.

The Colorado enhanced user experience by including air-conditioning, AM/FM radio and a CD player.