Powertrain: A turbocharged, 2.0-liter four-cylinder engine with 250 horsepower and 280 lb-ft of torque, with an 8-speed automatic transmission and front-wheel-drive or all-wheel-drive.

A twin-turbocharged, 2.7-liter V6 with 335 horsepower and 380 lb-ft of torque, with an 8-speed automatic and all-wheel-drive.

The National Highway Traffic Safety Administration (NHTSA) gave the 2020 Lincoln Nautilus the highest five-star rating in overall crash tests. The Insurance Institute for Highway Safety (IIHS) awarded the Nautilus its highest 'Good' rating in all categories except for headlight performance, where it scored a 'Poor' rating. Lincoln's crash-avoidance systems were rated 'Superior,' the highest-possible rating.

All Nautilus models come with the Lincoln Co-Pilot360 suite of driver-assistance technology features. These include automatic emergency braking with forward-collision warning and pedestrian detection, lane-keep assist with lane-departure warning, and blind-spot monitoring with rear cross-traffic alert. Optional on Reserve and standard on Black Label, the Co-Pilot360 Plus Package adds adaptive cruise control with Stop & Go functionality and a lane-centering feature.

The Nautilus' base price of just over $42,000 looks enticing when a modestly-optioned (and mechanically related) Ford Edge is about the same price. But pricing starts to rise quickly with add-ons such as all-wheel-drive and leather upholstery. At the other end of the scale, the posh Black Label trim with upgraded upholstery, the twin-turbo V6, fancy exterior accents, and dealer concierge extras starts at nearly $65,000. It touches almost $70,000 with every option. The more powerful Volvo XC60 T8 includes more features for about the same price.

The midrange Nautilus Reserve trim is the way to go. With the upgraded twin-turbo V6 and all-wheel-drive, as well as adaptive cruise control and 21-inch wheels, the Reserve comes to a still-reasonable $56,000.

All Nautilus models use an eight-inch touchscreen infotainment system that includes Apple CarPlay/Android Auto connectivity, a WiFi hotspot, and dual USB ports. A navigation system is optional on the base model and standard with the Reserve and Black Label. Lincoln's Sync 3 infotainment system works well compared to the cumbersome and slow systems offered on the Acura MDX and Lexus RX. Still, the BMW X5 has a useful rotary controller as well as a touchscreen, and the Mercedes GLE's MBUX interface can do tricks the Lincoln can't. While functional, the Nautilus has interior tech more befitting of a less expensive vehicle.

Nonetheless, all models get a 12.3-inch LCD configurable driver's display in place of physical gauges that's reasonably nice to look at, even if some of the fonts are small. A 4G LTE WiFi hotspot comes standard, as do rain-sensing wipers. Notable options are a rear DVD entertainment system, a wireless charging pad, 13- or 19-speaker Revel audio systems, a hands-free power liftgate, and an automatic parking feature.

The Nautilus' interior space is mostly average for a two-row luxury SUV. With up to 68.8 cubic feet of cargo space, it bests the Cadillac XT5, Jaguar F-Pace, Lexus RX, and Volvo XC60, and it isn't far off from the BMW X5. It's far smaller than the Acura MDX and Mercedes GLE, but Lincoln employs a square cargo hold that is surprisingly versatile.

The passenger doors are tall and open wide, and two child seats fit easily in the rear seat. Three adults could also be reasonably happy there.

The Nautilus doesn't offer a third row of seats, something many of its rivals do. But considering the optional seats on the BMW X5, Lexus RX, and Mercedes-Benz GLE are tiny and cramped even for children, Lincoln perhaps made the right choice not to offer any and instead steer larger families to the three-row Lincoln Aviator model. Storage space inside is nicely laid out, with large cupholders, door bins, and a reasonably sized center console storage area.

Towing capacity is a maximum of 2,000 pounds on all Nautilus models. That's much less than models like the X5 and GLE that can tow more than 6,600 pounds when properly equipped.

Lincoln took the 2019 model year Nautilus and turned it into a more distinctive vehicle with many design cues inspired by the Navigator SUV and Continental sedan. Its style makes no sporty pretensions but instead relies on chrome accents for a sense of grand luxury. The standard 18-inch wheels look a little small, but the Reserve and Black Label model have much-upgraded 20 and 21-inch versions, respectively.

Inside, the Nautilus doesn't share the stunningly designed dashboard and controls of larger Lincoln SUVs (an interior redesign is coming in 2021), but it feels upscale nonetheless. Especially in Black Label trim, the interior is mostly high quality. Leather is optional on the base model but standard elsewhere, and there are vast swaths of wood trim on the door panels and dashboard. Available 22-way power front seats allow passengers to find the most comfortable position.

It's clear from a very early start that the Nautilus is not a sporty SUV. That's not necessarily a surprise, given Lincoln's recent emphasis on providing a comfortable ride and quiet interior, and in that regard, the Nautilus doesn't disappoint. But it suffers from vague handling and a little too much float in the suspension, making it feel more boat-like than rivals like the Volvo XC60. Numb steering also conspires to make it feel indifferent to corners, something that other SUVs have rectified. The available adaptive suspension tries to mitigate this, but it's still no match for the adjustable air suspension on similarly priced competitors. The Nautilus is most at home on highways.

The standard turbocharged, 2.0-liter turbo-four is responsive enough, and its 250 horsepower feels more robust than its numbers would suggest. But it's hard to pass up the far punchier 335-horsepower, twin-turbo V6 that makes acceleration effortless. Again, the Nautilus is not a performance car, but the added cylinders' refinement adds to the serenity of the whole experience.

Those figures are competitive for the class, especially for the power that the twin-turbo V6 offers. But the Lincoln suffers more from the fact there are no electrification options such as a plug-in hybrid when nearly all of its competitors can extract some more economy out of their powertrains. 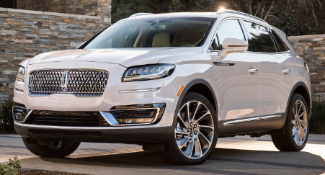 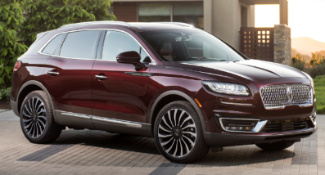