The Nissan Leaf is a compact, fully-electric five-door hatchback currently in its second generation. It was the first mass-market fully-electric car from a major automaker when it debuted for the 2010 model year. Since then it has become the world's best-selling mass-market EV. 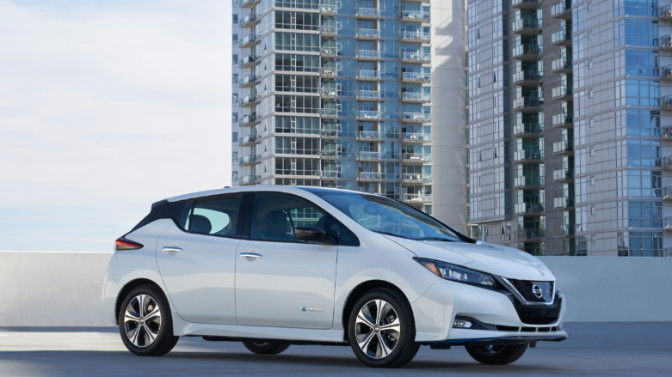 The new generation of Nissan Leaf debuted in 2017 for the 2018 model year. It featured the same compact, five-door hatchback layout as its predecessor and remains front-wheel-drive.

Base models of the Leaf are powered by a 148 horsepower synchronous electric motor with a single-speed transmission. The battery was now a 40 kWh lithium-ion battery pack with an official EPA range of 151 miles on a single charge.

Nissan gave this second generation a thorough redesign, chipping away at the first model’s rounded shape and giving it sharper lines and a lower roof profile.

This Leaf also has Nissan’s optional ProPilot system. It’s a driver-assist system that can help keep the vehicle in its lane and can use the adaptive cruise control to stay a set distance from the vehicle in front of it — without driver interference. If the vehicle in front begins braking, the system will also brake and even come to a complete stop if necessary for a much easier driving experience.

Another driver-assist feature is the e-Pedal, which applies regenerative braking force when the driver takes their foot off the gas pedal, slowing the car down. This allows the driver to essentially do one-foot driving around town.

Eight colors were available on this generation of Leaf.

In 2020, Nissan introduced the Leaf Plus. This model featured a larger 62 kWh battery that allowed for an EPA range of 226 miles on a single charge, plus faster charging, and a more powerful electric motor -- bumping output to 214 horsepower.

The Leaf Plus also brought with it a revised eight-inch touchscreen infotainment system as well as Apple CarPlay and Android Auto.

Three trims of Leaf were offered in this generation: the S, SV, and SL.

The SL trim is the highest trim, and it includes heated front seats, leather seats, a Bose seven-speaker system, and a portable charging cable.

There were no changes to the LEAF in 2021 but for the 2022 model year, new Nissan LEAFs come with a CHAdeMO quick charging port for fast charging at charger stations that have that connectivity. The SV Plus trim comes standard with the ProPilot Assist semi-autonomous driving mode, which is also an option on the SV and SL trim levels if you opt for the Technology package.

The 2022 LEAF also comes with a host of standard safety features including automated emergency braking and blind-spot monitoring. 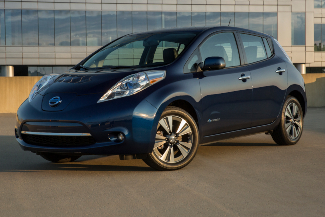 The Nissan Leaf was the first mainstream, mass-market, fully-electric vehicle made by a major automaker.

The first generation of Leaf was a front-motor and front-wheel drive powertrain built on the Nissan EV platform. It ran a 110 horsepower synchronous electric motor with a single-speed constant ratio transmission. The early models of this generation had a top speed of over 93 mph.

Initially, Nissan stated that the Leaf had a range of 109 miles for the 2011 and 2012 model years. The EPA however, found that the range was actually only 73 miles. Further test drives found that the range could vary as much as 40 percent in real-life situations. It depended on several factors, including load, driving style, traffic, weather, and use of car accessories or air conditioning.

The 2013 model improved several aspects of the vehicle's systems, but only achieved an EPA range rating of 75 miles. The 2014 and 2015 Leafs improved to 84 miles of range. In 2016, Nissan added a larger battery for the SL and SV trims and eventually for the base trim as well. This battery boosted its official EPA range to 107 miles.

To maximize efficiency, the Leaf featured several aerodynamic features, including a sharp V-style on the front of the vehicle and up-slanted LED headlights that help redirect airflow from the side mirrors. The bottom of the car also features aerodynamic paneling.

The main battery is 24 kWh with 192 total cells arranged in stacks of four cells. Along with the primary battery, the Leaf also features a 12-volt lead-acid battery to power the accessories and computers. The main battery was expected to lose some capacity over time, but Nissan stated it was capable of lasting a good ten years with average use.

Due to some conflicts over battery life, Nissan extended the battery warranty for 2011 through 2013 Leaf model years. Another conflict came with the Leaf's quoted range.

Charging ports for the Leaf varied over the different models. The ports are located on the front of the car. Before 2016, the two lower trims of Leaf came with standard charging, and the top trim came with DC fast charging capability. In late 2016, Nissan equipped all trims of Leaf with both charging receptacles. A standard household outlet and the supplied cable will give the Leaf about 5 miles in an hour, which fits general commuter use and the average 21 hours per day that such a vehicle is parked.