Vehicle Type: The Kia Sportage is a subcompact crossover.

Powertrain: Two engine choices are on deck for the 2017 Sportage.

The base engine is a 2.4-liter inline-four-cylinder that makes 181 horsepower and 175 lb-ft of torque. It's paired with a six-speed automatic transmission.

The range-topping powertrain is a turbocharged 2.0-liter engine that produces 240 horsepower and 260 lb-ft of torque.

The upgraded engine is also mated to a six-speed automatic. Front-wheel-drive is standard, and all-wheel-drive can be equipped.

The Sportage comes in three trims: LX, EX, and SX Turbo. Only the SX Turbo is available with the 2.0-liter engine.

The Sportage slots into the Kia lineup below the Sorento crossover.

The Sportage earned a Top Safety Pick designation from the Insurance Institute for Highway Safety (IIHS). That award includes Good scores in all crash-test categories and a Superior rating for front vehicle-to-vehicle crash prevention with the optional equipment on board. The Sportage's headlights earned Poor ratings.

It's possible to order a Sportage with a price tag deep into the $30,000 range, proving that Kia is no longer the bargain basement discount brand they once were. It's hard to ignore the Kia 10-year/100,000-mile warranty, though, as it sets the vehicle apart from other small SUVs.

Though it's not cheap, the Sportage is well equipped out of the box and offers many desirable features in even the most basic trim level. It's also worth noting that the Sportage's safety score is a big plus for buyers and applies to all vehicle levels. The Superior-rated front crash prevention system is only available in the top trim.

Even with its more mainstream price, the Sportage is positioned competitively with others in its segment and matches them feature for feature in many areas. The picture gets a little cloudy at the Sportage SX Turbo level, but there's still plenty to like.

Available equipment includes a 7.0-inch touchscreen, Apple CarPlay and Android Auto capabilities, a Harman Kardon 320-watt sound system with eight speakers, two additional USB ports, cruise control, automatic climate controls, a panoramic sunroof, a smart key system with push-button start, and a smart power liftgate. Some of these options are available as standalone features, but many are locked up in options packages like the Premium Package or the Technology Package.

Technology is a leading reason to buy the Sportage, especially in its higher trims. Even without the new and innovative Apple CarPlay and Android Auto, the Sportage's audio system sounds great, is easy to use, and works well within the overall interior aesthetic. The Kia UVO system that runs on the larger screen is one of the best and justifies its upmarket pricing. Only Ford, Chevrolet, and perhaps FCA offer a similarly easy-to-use system. It's a significant benefit for the compact crossover.

The Sportage's interior is filled with bins, cubbies, and storage trays that allow passengers in most seats to store all manner of small and medium-sized items. The rear doors have large bottle holders, and both front seats have net storage pockets to spoil the back-seat passengers.

Cargo space checks in at 30.7 cubic feet behind the rear seats and 60.1 cubic feet with them folded down. That's slightly smaller than some of the Sportage's competition, but the space is easily accessible and can be loaded in a breeze, thanks to the Kia's agreeable ride height.

Thoughtful features like a hands-free tailgate and useful safety tech make Sportage much more comfortable to live with daily. They also considerably bump up the value factor, as some of the Kia's competitors do not offer them in their subcompacts.

There's nothing subtle about the Sportage's style, which is not a bad thing at all. The large, gaping grille is flanked by round headlights that could almost look like Porsche Cayenne lights at a glance. The vehicle features strong curves that make it look larger than it is, especially when the upgraded alloy wheels are equipped.

The Sportage's interior is surprisingly upscale for the price point. Controls and displays are driver-oriented, and the mix of physical and virtual controls works well without much confusion. Leather is available, but even the cloth seats feel premium.

Outward visibility is decent, but large C-pillars and a high beltline create blind spots and complicate navigating tight urban spaces. This is perhaps the biggest issue with the new Sportage styling.

The Sportage, no matter the engine choice, is not quick. Even the upgraded turbo engine isn't going to wow anyone with its power, though it's light years ahead of the base mill.

Kia's decision to go with a 6-speed automatic here was a good one. It's more responsive and tighter than a CVT and matches well with either engine. Manual shift mode is pointless, as the vehicle isn't powerful enough to do any truly spirited driving.

The Kia handles itself well in the curves. Despite its overall lack of power, the Sportage is more engaging than the Honda CR-V, Mazda CX-5, Ford Escape, Subaru Forester, Nissan Rogue, Hyundai Tucson, or Toyota RAV4.

With front-wheel-drive and the base 2.4-liter drivetrain, the Sportage is rated at 22/29/25 mpg city/highway/combined. With AWD, those gas mileage numbers shift to 21/25/23 mpg.

With the turbocharged 2.0-liter and front-wheel-drive, the Sportage has EPA-estimated fuel economy ratings of 21/26/23 mpg city/hwy/combined. All-wheel-drive changes those numbers to 20/23/21 mpg. 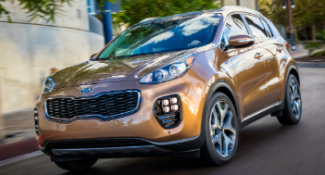 2017 Kia Sportage Review
Autolist Editorial | Aug 18, 2020
The Kia Sportage lacks the bargain pricing that the brand was built on, but it makes up for that with plenty of standard tech and stellar safety scores. Más ... 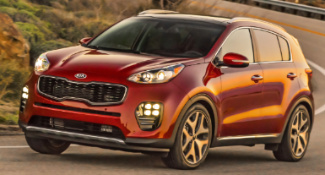