The 2019 Jeep Cherokee is a compact SUV which is now in its fifth generation.

New features for the 2019 model year are highlighted by a new front-end design which was notoriously polarizing for most who critiqued the pre-facelift Cherokee.

Another welcome change to the lineup is the addition of a new engine: the 2.0 liter, turbocharged engine is added to the powertrain options and produces 270 horsepower and 295 lb-ft. of torque.

Additional rear cargo space, updated Uconnect infotainment updates, and the addition of standard Apple CarPlay and Android Auto round out all of the Cherokee’s new features.

The Cherokee has come a long way since it was reborn from the Jeep Liberty in 2014. Small improvements over the years, both mechanically and stylistically, have made it a well-rounded choice for those who want to work during the day and play in the great outdoors at night and on the weekends.

FCA made the 2019 Jeep Cherokee a more normal-looking crossover SUV thanks to its new facelift. It is more conservative and follows Jeep’s design language more closely, mimicking its Jeep Compass and Grand Cherokee siblings. 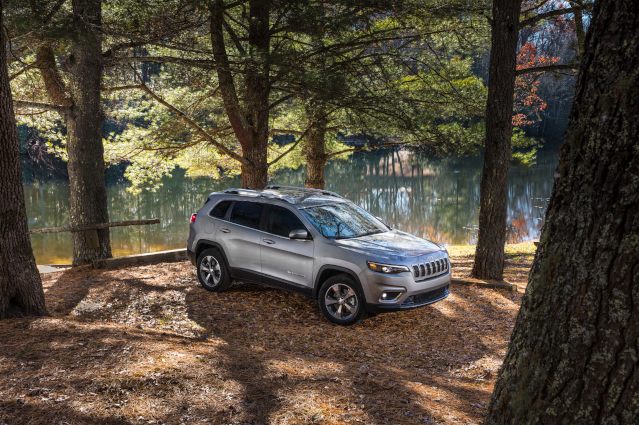 Unique exterior trim is also present on the Trailhawk and Overland trims for a distinct appearance.

Interior quality has notably been improved for the 2019 Cherokee refresh.

Overall impressions from reviewers can be summed up in the word, “serviceable.” Though quality has been improved, materials and comfort are still average for the class. 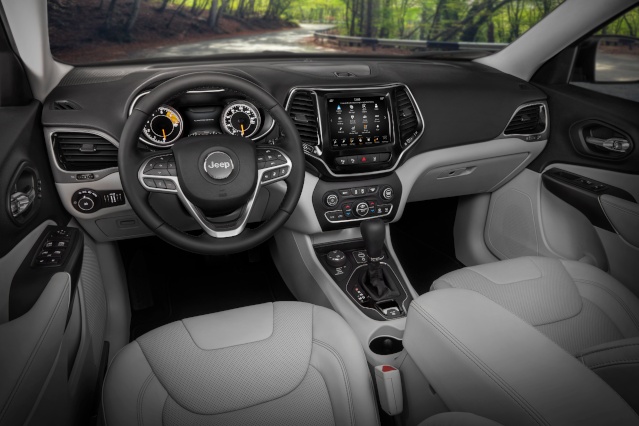 Higher trim levels do offer leather seating, a leather-wrapped steering wheel, and upholstery for an upgraded feel, but plastic parts are present throughout the interior.

Headroom and legroom are both plentiful with an easy step-in height. Some reviewers noted that the lower roof overhang was slightly inconvenient when entering the rear seats. Seats were noted to be comfortable while not overly supportive.

Ride comfort and road noise are both reported to be average and expected for an SUV.

Though the Cherokee’s cargo space increased for 2019, it still falls far short of the competition. With 24.7 cubic feet of cargo space, it falls behind almost all other competitors in the segment. 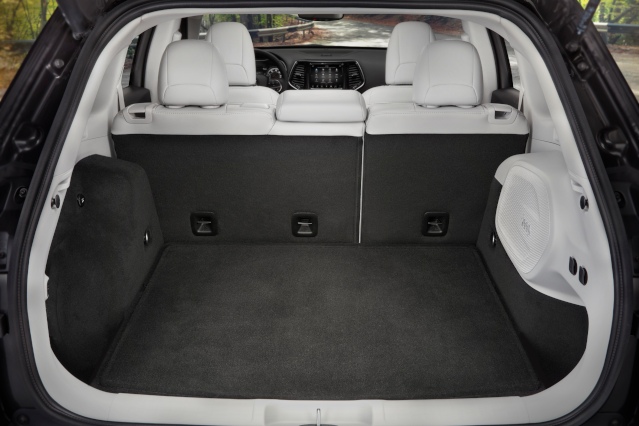 Despite the lack of cargo space in the trunk, storage cubbies are plentiful throughout the cabin, and an adjustable cargo load floor makes trunk space more efficient. Both the rear seats can be folded down for longer or larger items.

In contrast to the Cherokee’s lack of cargo area, its towing capacity is best in class. Cherokees equipped with the 271 horsepower V6 engine can tow up to 4500 pounds while the new 2.0 liter turbocharged four cylinder engine can handle up to 4000 pounds.

One of Jeep’s best known attributes is that it can go anywhere. One tester noted that he tested the Jeep Cherokee Trailhawk alongside the Jeep Wrangler Rubicon, and it was able to do just about everything the Rubicon did, which is impressive.

It should be noted that the Cherokee’s approach and departure angle grant it slightly less utility than the Wrangler for serious off-roaders. 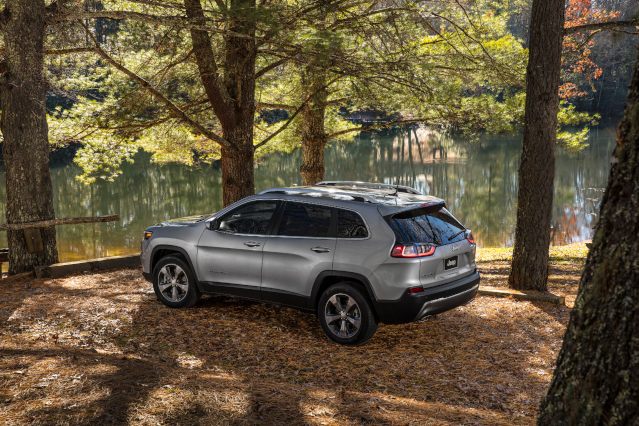 Though its off-road and towing capabilities make it one of the most well-rounded SUVs in its class, its comparative lack of cargo space brings its overall practicality and utility down to about average for the segment.

Technology and infotainment features are well-represented in the 2019 Jeep Cherokee.

Apple CarPlay and Android Auto are standard across all trims of the Cherokee. While the Uconnect touchscreen infotainment system was upgraded for 2019, the standard screen size is only 7 inches in diameter, small compared to other competitors.

Safety and driving assistance features are available for Cherokee buyers, but unfortunately, many of those are only available on higher trim levels.

Standard features include a backup camera, traction control, and a rearview camera that can be turned on even when the vehicle isn’t in reverse.

The 2018 Cherokee earned a “marginal” score in the small overlap crash test for the driver’s side while it earned top marks for child safety. The 2019 Cherokee has not been crash tested yet but is expected to be with reported improvements from Fiat-Chrysler, making it safer.

Reviewers of the Cherokee were pleasantly surprised by its overall improvements, especially the new turbocharged four cylinder engine.

Jeep offers three engine options for the Cherokee, all of which are paired to a 9-speed automatic transmission:

Testers are surprised, though not overwhelmed, by the Cherokee’s handling capability. It weighs about 4000 pounds, which is more than most of its competitors.

When mated with the turbo four cylinder or V6 engine, it is noted that handling is surprisingly nimble, though acceleration is slightly underwhelming due to its weight and transmission.

Reviewers of the Cherokee almost universally cite its nine-speed automatic transmission as a downfall to the SUV. It is noted to be sluggish, poor to upshift and downshift at times, and finicky.

It should also be noted that reviewers also found the transmission to be slightly improved for 2019, adding that the additional power of the V6 and the 2.0 liter turbo engines help mitigate the feel of any transmission sluggishness.

Almost all reviewers agreed that the 2.4 liter four cylinder base engine option was slow to respond, not adequate for the weight of the Cherokee, and should be avoided in favor of one of the other two engine options.

The Cherokee's fuel economy lags behind the competition.

If interior space, upscale interior, and a great driving experience are important to you, the Cherokee will fall behind competitors such as the Mazda CX-5, Honda CR-V, and Toyota RAV4.

If you are the adventurous type, consistently haul trailers, or feel like going anywhere at any time, the Jeep Cherokee provides excellent value and tremendous off-road capability.

The Cherokee’s base price is higher than most other competitors, but its capability far exceeds most in the segment.

Another area of value the Cherokee provides is the ability to choose several features instead of choosing entire package options for different trim levels. Jeep does offer several packages to add to the Cherokee, but not all are necessary for certain individual features to be added to your trim of choice.

Trim levels able to be fitted with all wheel drive are also able to be upgraded to the Active Drive Four-Wheel Drive system standard on the Trailhawk trim.

A tow package is available for Latitude Plus, Limited, and Trailhawk trims. It includes a Class III hitch, transmission cooler, and trailer wiring. Cherokees with the V6 engine and tow package coupled include a more robust engine cooling system as well.

The Cherokee is available in five different trim options:

The Latitude is the base model Cherokee and starts at just over $26,000 with destination fee included.

Opting for the Latitude Plus will push the price to $28,000 with destination and the base 2.4 liter engine equipped with front wheel drive.

The Latitude Plus adds some luxury features to the base model such as push button start, leather upholstery, a power driver’s seat, and satellite radio.

The Jeep Cherokee Limited starts at around $32,000 with destination and the base 2.4 liter engine as well as front wheel drive.

The Limited trim is essentially a Jeep Cherokee Latitude Plus with the Comfort and Convenience Package included and the addition of several luxury and safety features.

The Cherokee Trailhawk starts at about $35,500 with destination.

It comes standard with the 271 horsepower V6 engine and Active Drive Four-Wheel Drive system which is a more advanced system than Jeep’s regular all wheel drive system. Included in this system is Active Drive Lock and Jeep’s selec-terrain management system for various driving conditions.

The Trailhawk is equipped with most of the Limited trim option except for the power liftgate. Additionally, it is equipped with skid plates, larger and wider wheels and all-terrain tires, unique exterior trail rated badging and trim coloration, a cloth-leather combination interior, Jeep’s hill management system a locking rear differential, and a more robust suspension system which adds 1 inch of ground clearance.

A navigation system is an optional extra.

Fully optioned, a Jeep Cherokee Trailhawk Elite will exceed $45,000 and is the most well suited trim level for serious off-roading.

The Cherokee Overland tops out the Cherokee line and starts at just over $38,000 with destination. It is equipped with the V6 engine and front wheel drive as standard.