Would we buy one? Yes, though it depends on the trim.

Front-wheel drive (FWD) is standard, and four-wheel-drive is available.

The 2018 Jeep Compass achieved a Four out of Five Star safety rating from the NHTSA, mainly due to its lack of base active driver assistance tech. However, the IIHS did rate it as a Top Safety Pick.

The 2018 Compass lacks many standard driver safety aids, making it lag behind the competition. The base Sport trim has fewer features than competitors, and convenience, connectivity, and safety tech are reserved for pricy options packages on upper trims.

Its performance doesn't stack up, and neither does its fuel economy or overall fun-to-drive factor. Its one saving grace is its off-road capability, which is impressive for its size and pricing, which we'll get to in just a bit.

The Navigation Group ups the infotainment screen size to an 8.4-inch touchscreen and adds a GPS navigation system, along with all of the amenities of the Popular Equipment Group.

Even on the Jeep Compass Limited, these packages must be added to achieve what would be considered regular, modern tech. Cruise control is about as advanced as tech gets in the base Jeep Compass Sport.

When it comes to interior room, the 2018 model has good dimensions: 39.2 inches of headroom in the front seat area (slightly less on sunroof-equipped models), 38.5 inches in the rear seat area, 41.8 inches of legroom up front, 38.3 inches in the back, and generous hip room at 54.1 inches up front and 49.2 in the back. Reviewers found the interior to be generally airy and spacious, especially from the front passenger seat.

Cargo space is generally good, with 27.2 cubic feet of available cargo room with the rear seats up, and a generous 59.8 cubic feet with the rear seats down. Cargo loading is a bit easier thanks to an even loan floor, and a fold-flat rear seat. Optional roof rails expand cargo further for the more adventurous. Towing capacity is good for the segment at 2,000 lbs. for AWD models.

The current-generation Jeep Compass, which has been around since 2016, looks substantially better than the previous generation. It looks athletic and ready to take on adventures, and it meshes well with the rest of Jeep's lineup, especially the Grand Cherokee and Wrangler. It seems substantially nicer and more capable than the smaller Renegade as well.

Various 18-inch wheel options, the higher ride height on the Trailhawk, and several design upgrades spiff it up even more.

The interior is a pleasant place to be. While there's a lot of hard plastic throughout, some reviewers found the Jeep to have a superior cabin to the Toyota RAV4 and Kia Sportage. It's nowhere near the Mazda CX-5 or Volkswagen Tiguan here, though.

Along with the Toyota RAV4, the Jeep Compass is one of the slowest in the segment, taking 9.3 seconds to reach 60 mph from a standstill and nearly thirty seconds to reach 100 mph. It took 184 feet to come to a stop from 70 mph -- among the worst in its segment -- and it was able to pull just 0.79 Gs of lateral grip on the skidpad.

But again, thanks to the off-road ability of the Trailhawk, its impressive standard features make it a top choice for folks with active lifestyles who don't want any impedance to reaching their weekend camping plans.

The Jeep Compass might be one of the smaller vehicles in the iconic company's lineup, but its fuel economy helps prove its still a bit on the portlier side. With a curb weight ranging from 3,184-3,633 pounds, and the underpowered 2.4-liter four-cylinder engine, the Compass offers reasonably good fuel economy. Front-wheel-drive models with the manual transmission return an EPA-estimated 23/32 mpg city/highway. Four-wheel-drive trims return 22/30 mpg. 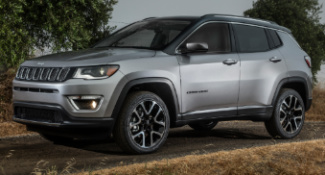 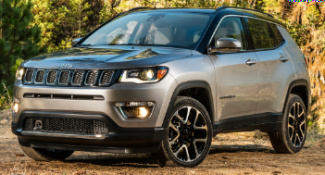