Would we buy one? At the right price.

Powertrain: A 2.0-liter four-cylinder with 148 horsepower and 145 lb-ft of torque, front-wheel-drive, and continuously variable automatic transmission.

The Insurance Institute for Highway Safety (IIHS) scored the 2020 Mitsubishi Outlander Sport Acceptable for small overlap front driver-side crashworthiness, its second-highest rating, and the highest Good in all other categories. The optional vehicle-to-vehicle crash prevention tech earned the highest Superior rating, while the optional vehicle-to-pedestrian prevention system earned a Basic score, the lowest. It includes ratings for the forward collision mitigation system and does not consider features like blind-spot monitoring.

The National Highway Traffic Safety Administration (NHTSA) rated the Outlander Sport four stars overall, including a four-star rating for front crash protection, five stars for side crash protection, and four stars for rollover resistance. While it's a respectable performance, newer rivals perform better in this test as well as the IIHS'.

The Outlander Sport is competitive with almost all of its competition on pricing, but it's hard to imagine how it's the best value. There are five trim levels for 2020: ES, SE, SP, BE, and GT. The base ES model gets only essential features, and it requires a step up to get more desirable options. It also requires moving up some trims to get better driver assistance technology, although some automakers offer more extensive features than Mitsubishi does at any price.

At least Mitsubishi provides a comprehensive warranty for the Outlander Sport. At up to 10 years or 100,000 miles of powertrain coverage, and 5 years or 60,000 bumper to bumper, only Hyundai and Kia can match it.

Starting with the SE trim, available features include an 8.0-inch touchscreen, LED headlights, LED fog lights, LED daytime running lights, Apple CarPlay and Android Auto, a Rockford Fosgate premium audio system, and keyless entry with push-button start. Mitsubishi's infotainment system is simple and easily controlled when the vehicle is in motion, and the Apple CarPlay and Android Auto integration makes up for the lack of a built-in navigation option.

The Outlander Sport's diminutive exterior dimensions hide a surprisingly roomy interior. There's plenty of cargo space behind the back seats and much more when the 60/40 split-folding seat is folded down.

Get around the cheap-feeling interior, and the Outlander Sport does well with small-item storage. The door pockets are large enough to hold a water bottle, along with several other trinkets, and the center console is more than large enough to carry a purse-full of gear. That said, there are no door pockets for rear-seat passengers, and the spare tire cuts into rear storage space considerably.

The Outlander Sport is a handsome vehicle with sharp lines and a modern profile. Its design is in line with the rest of the crossover segment, where there is not a lot of variety or expressive shapes.

Inside, the Outlander is logically arranged and features controls, displays, and functions easily visible and usable from nearly every angle. Outward visibility is good, thanks in part to a high driving position and large windows. But the cloth upholstery feels cheap, and the base Outlander ES feels downright rental-spec, and the whole interior gives the impression of an older model. There are rival small SUVs with more attractive interior designs and some with better materials quality.

The 2.0-liter four-cylinder engine that comes in all but the GT trim is almost unbearably underpowered. It makes a ferocious noise and doesn't seem to motivate the Outlander Sport with any real urgency. The continuously variable transmission doesn't help matters, seemingly exacerbating the noise. Few subcompact SUVs have an abundance of power, but the Mitsubishi's 2.0-liter engine feels more strained than most.

The GT model, with its 2.4-liter engine, is significantly better, both in power and noise. It can push the Outlander Sport to 60 mph in around eight seconds and does so with quite a bit less drama than its smaller counterpart. But neither engine is quick, and the Mazda CX-30 and turbocharged Hyundai Kona and Kia Seltos are far better in this regard.

The Outlander Sport's suspension setup lets in a bit more body roll and movement in the corners than most would expect, but there's not enough to make the vehicle feel unsettled or unstable. But it makes the SUV feel larger than its dimensions would suggest, hampering maneuverability even at low speeds.

The Outlander Sport 2.0-liter models are rated by the Environmental Protection Agency (EPA) at 24 mpg city, 30 highway, and 27 mpg combined. Adding all-wheel-drive drops those figures by 1 mpg in all categories. These estimates are behind most rivals with similar power by 1 or 2 mpg, but still in the running for SUVs of this type.

The Outlander Sport GT with its 2.4-liter engine is EPA rated at 23 mpg city, 29 highway, and 25 combined. With AWD, only the highway estimate drops by 1 mpg. These figures are far behind other small SUVs and even worse than some midsize SUVs. 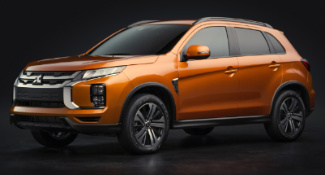 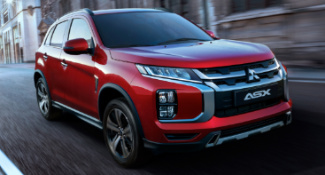