Reviews on the 2018 Toyota Camry are mixed, with high praise for its engine efficiency, handling, fuel economy and the spacious, comfortable interior.

Detractors are put off by a slow acceleration, an uninspired infotainment system and concerns about the quality of some of the interior materials.

While opting for the higher trims may be pricey, these upgrades deliver more value and more attractive features.

Overall, the Camry continues to deliver on a solid history of safety, reliability and reputation.

Price Range: All new for the 2018 model year, there are seven trim levels plus three hybrid trims that are available for the new Camry. The base Camry L trim MSRP begins at $24,885 and the top of the line Toyota Camry XSE V6 starts at $35,835. Pricing for Hybrid LE trim starts at $28,658 and the top Hybrid XLE begins at $33,135. All prices include destination, but before any options.

Powertrain: Two engine options are available in the non-hybrid Toyota Camry. The base engine is a 2.5-liter 4-cylinder engine, making up to 206 horsepower and 186 pound-foot of torque depending on the trim. The 3.5-liter V6 engine makes 301 horsepower and 267 pound-foot of torque. Each traditional engine option is backed by an eight-speed automatic transmission. All trims of the Toyota Camry are front-wheel drive.

Hybrid models get a detuned 2.5-liter four-cylinder engine mated to a battery and electric motor, which combine for a total of 208 horsepower. The hybrid powertrain runs through a continuously-variable transmission (CVT).

IIHS awarded the 2018 Toyota Camry with a Top Safety Pick Plus designation, thanks to the standard Toyota SafetySense suite. The Camry also received the highest rating in its class in crash tests.

The Toyota Camry always has been about value and practicality, and it still is. With expected modern features like keyless entry, and unexpected standard safety features like the included Toyota SafetySense features, the Camry is a value leader in the segment.

In a world ever dominated by crossovers, the Camry still finds that value niche. For buyers who don't need higher clearance, voluminous cabin space, or AWD, Toyota's favorite sedan offers more for the money.

A top-spec 301 horsepower Toyota Camry XSE with red leather seats, moonroof, and all the bells and whistles will still come in at thousands less than a similarly equipped midsized crossover.

Toyota's newly designed Entune 3.0 system handles connectivity, climate control, and the infotainment system through a 7- or 8-inch touchscreen. Using Toyota's Entune app, the Camry can connect to your phone for functions like Bluetooth, or navigation. In lower trims, navigation is handled by the Scout app, and higher trim levels offer built in navigation.

Unfortunately, Android Auto and Apple Carplay are not available on the 2018 Toyota Camry.

Although the Toyota Camry suffers from the obvious spatial drawbacks of its sedan body style, it is still a very practical vehicle. The new Camry gets you from A to B, in relative style, sportiness, and with good fuel economy, or great fuel economy when hybrid equipped.

The trunk space is less than class leading, but the rear seat does fold down to accommodate longer objects. The new Camry also has a larger cabin, both front seat and rear seat passengers benefit from additional space over the outgoing model.

The Toyota Camry is a new car for 2018, and the styling inside and out is definitely modern. Outside, the styling is sportier and more modern, including a two-tone paint job as on option on XSE models.

Inside all touchpoints feature improved materials, from the steering wheel to interior door handles. The optional red leather interior and rear spoiler on the XSE model are a bit jarring to see on a Camry at first, but signal the sporty aspirations of the new car.

The new Camry has moved to Toyota's new TNGA platform, which offers a sporty driving characteristic when equipped with the four-cylinder engine, and controls the more powerful V6 well. The eight-speed transmission with paddle shifters clicks though gears delightfully. The new platform also handles more precisely, and soaks up most road imperfections with ease.

In less aggressive and Hybrid trims, the driver's seat of a new Camry is still a nice place to be. Toyota's famous quality and comfort are standard on all models.

In L trim, the 2.5 liter four-cylinder engine receives an EPA estimated 41 highway mpg, 29 city mpg, and 34 combined mpg. Other trims equipped with the four-cylinder engine see a slight dip to 39 hwy, 28 city, and 32 combined.
When optioned with the 3.5 liter V6 engine, the EPA estimates the Toyota Camry should see 33 hwy, 22 city, and 26 combined mpg. 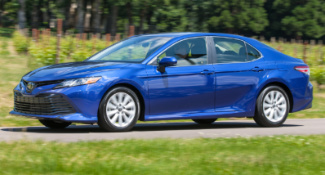 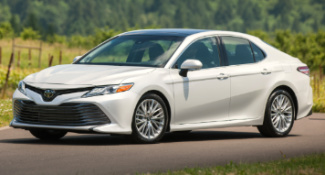