Vehicle Type: A four-door large luxury SUV with seating for up to eight.

Powertrain: A 6.2-liter V8 engine with 420 horsepower and 460 lb-ft of torque, with a 10-speed automatic transmission, rear-wheel-drive or four-wheel-drive.

A 3.0-liter six-cylinder turbodiesel engine with 277 horsepower and 460 lb-ft of torque, with a 10-speed automatic, rear-wheel-drive or four-wheel-drive.

For fans of large luxury vehicles, the Cadillac Escalade has become a byword for excessive elegance. Debuting roughly two decades ago as a gussied-up Chevrolet Tahoe (itself based on a workhorse pickup truck), the Escalade rose to prominence in the luxury sphere, becoming Cadillac's unlikely flagship.

The Escalade was completely redesigned for 2021, using a new structure and a revised chassis layout. The length has gone up by nearly one foot, most of which has gone into making the third-row seat more habitable and increasing cargo space. A rear independent suspension allows for a fold-flat third-row seat. The new Escalade uses OLED screens for the instrument panel and infotainment system. And for the first time, a turbodiesel engine is available, a 3.0-liter six-cylinder unit like the one in the Chevrolet Silverado and GMC Sierra pickup trucks.

Automatic seat belt-tightening is standard on Premium Luxury Platinum models and optional on all but the base Luxury trim. An available night vision system uses an infrared camera to project images for better nighttime visibility. In 2021, the Escalade will be available with Cadillac's Enhanced Super Cruise advanced driver-assist system, offering some hands-free driving ability on highways, as well as features like automatic lane changing.

Neither the National Highway Transportation Safety Administration nor the Insurance Institute for Highway Safety has tested the 2021 Escalade.

At more than $77,000 to start, the Escalade is far from inexpensive, but it comes reasonably well equipped. Interestingly, there is no price difference between the gasoline V8 and six-cylinder turbodiesel. Four-wheel-drive is a $3,000 option on all trims. The base Luxury trim lacks many options and doesn't include real leather upholstery or a sunroof. For those items, stepping up to the Premium Luxury or Sport is a must, bringing the base price into the mid-$80,000 range, before desirable options such as Super Cruise or the heavy-duty towing package.

The GMC Yukon Denali uses the same engine as the Escalade and offers identical space inside. While the interior isn't as fancy and lacks some of the Cadillac's technological advancements, it starts at under $70,000. Think of the Yukon Denali as 95 percent of an Escalade for a 10-percent discount.

Technology is the 2021 Escalade's pièce de résistance. While features such as Super Cruise and night vision are only apparent while driving, the massive OLED screens are showpieces even when sitting still. The cutting-edge digital screens span an astounding 38 inches of the dashboard, encompassing both the digital instrument cluster and infotainment display, plus a small screen to the left of the gauges serving as a trip computer. Wireless Apple CarPlay and Android Auto connectivity are included, as is a wireless charging pad. Cadillac's infotainment system has been continuously refined, and while it's not as elaborate as those found in BMW or Mercedes-Benz vehicles, it's arguably more usable and visually impressive. OnStar telematics and a 4G LTE WiFi hotspot are standard. Most models have a built-in navigation system and a 19-speaker AKG audio system.

Options include a rear entertainment system with dual 12.6-inch screens for the second-row passengers, two USB-C and two HDMI ports, and wireless streaming capabilities. Standard on Premium Luxury Platinum and Sport Platinum, and optional on some other versions, is a 36-speaker AKG Studio Reference sound system. A head-up display and automated parking assist system are also available on certain trims.

Every Escalade comes with three rows of seats. Second-row captain's chairs are standard, with a seven-passenger capacity. A second-row 60/40 split-folding bench seat is a no-cost option, bringing total seating to eight. A power release button folds the second-row seats forward to access the third row, but the high step-in may be tricky for some people, even with the standard fixed running boards or optional power-deploying ones. But once in the rearmost row, occupants will find the Escalade's third-row bench to be far more comfortable than before, thanks to better interior design and more legroom. Extended-length ESV models have even more rear legroom. The Range Rover doesn't offer a third-row seat, and the Lexus LX 570 recently added one as an option. There are four LATCH connectors for child seats in the Cadillac.

The significant increase in length pays dividends in cargo space, with up to 25 cubic feet behind the third row in the standard model and 109 cubic feet with the second and third rows folded down. In the ESV, typical and max cargo is 43 and 127 cubic feet, respectively. Those numbers are vaster than the Lincoln Navigator. Meanwhile, even the standard-length Escalade has far more space than three-row rivals.

Escalades with the V8 and two-wheel-drive can tow up to 8,200 pounds when equipped with the optional towing package. Four-wheel-drive models provide up to 8,000 pounds. With the turbodiesel, the Escalade can tow between 7,700 and 7,900 pounds.

What the Escalade doesn't have, though, is much in the way of off-road capability. The Range Rover, Lexus LX 570, Toyota Land Cruiser, and Mercedes-Benz G-Class all offer locking differentials and better axle articulation than the Cadillac. Off-road-oriented versions of the Chevrolet Tahoe and GMC Yukon do better, too. An available air suspension and electronic limited-slip differential help, but the Escalade's abilities plummet on anything muddier than a polo field.

Sport models downplay the vast amounts of chrome that have long been a hallmark of the Escalade's exterior. Instead, they employ dark-gloss trim for the grille and wheels, giving off a more aggressive look. The Escalade is a large and flashy vehicle that stands out from its rivals -- many of which are still quite fancy-looking.

Screens dominate the dashboard, but the curved OLED displays are far more futuristic and exciting than the systems wedged into competing vehicles in this price bracket. Not only are the interior materials greatly improved over the last model, but there is a better storage console for front-seat passengers. The new electronic shifter takes some getting used to, but it's a higher-quality piece than last generation's column shifter that seemed to be lifted from a pickup truck. Platinum models get leather on nearly every surface and a faux-suede headliner, befitting its $100,000-plus price tag. Conversely, Cadillac oddly does not include leather upholstery on the base Luxury model. Real leather only starts becoming available on the Premium Luxury model, which is $7,000 pricier.

The 6.2-liter V8 engine is the most notable carryover piece from the previous Escalade, but that's far from a bad thing. With 420 horsepower, it moves the giant Cadillac with authority, more than keeping up with competitors like the Lexus LX 570, Range Rover, and Mercedes GLS. It lacks, however, the athleticism of a BMW X7. Despite the new rear suspension and available magnetic ride and air suspension, the Escalade is still much more at home on highways than twisty backroads. The newly available turbodiesel 3.0-liter six-cylinder is worthy of consideration, significantly improving fuel economy over the V8 while providing the same torque. Its 277 horsepower won't win any acceleration contests; it's more suited to the Cadillac's comfortable cruising demeanor.

The new underpinnings give the Escalade a similarly refined ride to immediate rivals, namely the Lincoln Navigator. That's further helped by the available suspension upgrades that iron out road imperfections caused by the standard 22-inch wheels. The Escalade also continues with its immensely quiet interior, though that's par for the course in this class, and it isn't any better than a Yukon Denali's.

Regardless of engine, the Escalade is relatively fuel-efficient compared to direct rivals, thanks in part to the cylinder deactivation system on the V8 that allows as many as four of the eight cylinders to shut off when not needed for acceleration. The Lexus LX 570 and Toyota Land Cruiser, with less power than the Escalade V8, are rated at just 14 mpg combined, while the BMW X7 M50i ties the Escalade's 17 mpg. The twin-turbo V6 Lincoln Navigator and the Mercedes-Benz GLS 580 are rated at 18 mpg --slightly higher than the Escalade and equivalently powerful.

However, few can match the Escalade's fuel economy figures with the turbodiesel engine – even some smaller SUVs. Six-cylinder gasoline versions of the BMW X7, Range Rover, and Mercedes GLS rate 21-22 mpg combined. And the Range Rover's available plug-in hybrid is only rated at 19 mpg combined.

The 2021 Cadillac Escalade starts at $77,490 MSRP and rises to $101,290 MSRP including the $1,295 destination charge. There are five trim levels, each offering either a 420-horsepower 6.2-liter gasoline V8 or a 277-horsepower 3.0-liter turbodiesel six-cylinder. Four-wheel-drive is a $3,000 option on all versions. A Cadillac Escalade ESV extended-length variant costs an additional $3,000.

Apart from four-wheel-drive, the only other significant option on the Luxury model is a 60/40 split second-row bench seat that replaces the captain's chairs and raises total seating capacity to eight.

The Escalade Sport starts from $86,890. It adds to the Luxury's equipment with a gloss-black grille and other exterior trim, dark-finished 22-inch wheels, leather upholstery, and the Performance Package from the Premium Luxury.

If we were on the market for an Escalade, we'd probably go with the Premium Luxury. It comes with leather, heated/cooled front seats, and other amenities we expect from a full-size luxury SUV. It also gets key driver assists, and it doesn't break the bank like upper trims. 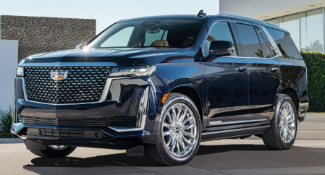 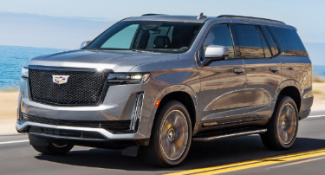