Vehicle Type: A four-door, three-row midsize SUV with seating for seven or eight.

Powertrain: A 280-horsepower, 3.5-liter V6 engine with a nine-speed automatic transmission, and front-wheel-drive or all-wheel-drive.

The National Highway Traffic Safety Administration (NHTSA) scored the 2021 Honda Pilot five stars in overall testing, its highest rating. The Insurance Institute for Highway Safety (IIHS) rated the Pilot 'Good' in most crash tests, scoring the second-highest 'Acceptable' in the small overlap test-passenger side with the standard LED headlights.

Every 2021 Pilot comes with the Honda Sensing suite of driver assistance features, including automatic emergency braking, forward-collision warning, lane-keep assist, lane departure warning, adaptive cruise control, and a system that prepares the car if it's about to run off the road. EX and higher trims get a blind-spot monitor. Touring models add parking sensors, while the Elite also gets auto-dimming exterior mirrors.

The Honda Pilot LX is well-equipped for around $33,000 MSRP. For 2021, it adds the 9-speed automatic and dual-zone automatic climate control, too. EX and EX-L trims add a few more creature comforts, such as a 10-way power driver's seat, power tailgate, heated front seats with 2-position driver's memory, and leather upholstery. The new Special Edition trim gets a hands-free power tailgate, black roof rails, and a wireless charging pad. Pricing starts at $40,000 for the Special Edition, making it a great value compared to pricey alternatives like the Ford Explorer and Buick Enclave.

The Pilot's more expensive models quickly jump in price, with the Touring trim starting at $44,000 with not much more useful equipment. The Black Edition, which is mostly a cosmetic package for a top Elite model, is $51,000 and adds a panoramic moonroof and little else of substance. The Hyundai Palisade and Kia Telluride offer more equipment for thousands less.

Most Pilot trims offer many technologies. Apart from a multi-angle rearview camera and push-button start, base LX models are somewhat rudimentary. It takes stepping up to the EX to get Apple CarPlay and Android Auto on an 8-inch touchscreen, as well as keyless entry and a novel in-cabin voice projection system. It requires another big jump in price to get the Touring, with navigation, a WiFi hotspot, a 10-speaker audio system, and the Blu-Ray rear entertainment system -- the latter being a rare feature from a manufacturer these days.

However, the upgraded touchscreen is frustrating to use as it uses Honda's older, less intuitive infotainment system. The only physical shortcut button is a volume knob, and the touchscreen's integrated navigation system has outdated graphics. Nearly every rival takes a more modern approach.

With standard seating for eight passengers, the Pilot is among the most spacious in the class, in theory. The Touring, Elite, and Black Edition models can be equipped with second-row captain's chairs, making getting into the third-row seat easier. That's a plus because while the second-row slides forward at the touch of a button, it doesn't move as far as the Buick Enclave and Chevy Traverse, which feel roomier in the rearmost seats. The Pilot has nearly the same cargo space as the Buick and Chevy.

There are three LATCH connectors for child seats in the second-row when equipped with the standard bench seat. Bizarrely, there's just one in the third-row on the passenger's side, but it's still easier to fit four child seats in the Honda than most rivals.

Towing capacity is 3,500 pounds for FWD models and 5,000 for AWD-equipped versions when properly equipped. That's relatively good for the class, as only truck-based rivals like the Dodge Durango can pull significantly more with its V6 or V8 options.

It's been five years since the Pilot's last redesign, but a 2019 refresh helped matters a bit. It isn't as sleek as the Mazda CX-9, partly because it's much more spacious inside, but all models get 18- or 20-inch wheels. The Special Edition and Black Edition get slightly more aggressive exterior styling cues, borrowed from the smaller, sportier Honda Passport two-row SUV. But it doesn't look as opulent as high-end versions of other vehicles.

The interior, while ultimately practical, doesn't feel incredibly luxurious. The leather upholstery isn't as rich as that on a Hyundai Palisade or Kia Telluride, but at least there's a massive center console and double-tiered door bins in the front seat for small-item storage. Generously sized cupholders abound, too, and the tall doors make it easy to get in and out. Small kids will likely struggle to get up without help from an adult, but every vehicle in this class lacks modern minivans' easy access.

While many large SUVs have shifted to turbocharged four-cylinder engines and even continuously variable transmissions, Honda employs a tried-and-true V6 engine with 280 horsepower. Once only available on top trim levels, the 9-speed automatic is now standard on all models. It probably has more gears than necessary, but the transmission does a decent job maximizing the Pilot's power under heavy loads. AWD models come with electronic control to split power between the front and rear wheels and between each rear wheel for improved traction. Models other than the LX also get a button to switch between preset settings for snow, mud, or sand.

However, the Pilot doesn't feel as agile or rewarding to drive as some rivals. The ride wallows because the suspension is so soft, and while the light steering might be a plus when parking, it has little feel at highway speeds and makes the vehicle feel very large in corners. The enormous interior is quiet, but the Honda doesn't feel as sophisticated to drive as vehicles like the newer Toyota Highlander, Hyundai Palisade, or Kia Telluride. It doesn't feel as athletic as the Mazda CX-9 or Volkswagen Atlas.

The 2021 Honda Pilot with front-wheel-drive is rated at 20 mpg city, 27 highway, and 23 combined, according to the Environmental Protection Agency (EPA). All-wheel-drive models drop by one mpg in all categories.

The Pilot's estimated fuel economy figures land near the top of the three-row SUV class, although versions of the GMC Acadia and Mazda CX-9 perform slightly better. The Pilot lacks any electrified or hybrid option to compete with the Toyota Highlander Hybrid at 35 mpg combined or the Ford Explorer Hybrid at 27. 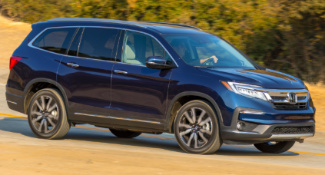