Toyota is at the forefront of standard driver safety technology, and its compact Corolla sedan has one of the best feature sets of any small car. Its suite of Toyota Safety Sense systems includes forward-collision warning, automatic emergency braking, lane-departure alert, lane-keep assist, adaptive cruise control, and automatic high beams. There is also a lane-tracing feature that keeps the Corolla centered in its driving lane. All but the base trim come with a security alarm. The Corolla also has front and rear side airbags, front and rear curtain airbags, a front knee airbag, and pedestrian detection.

The fancier Corolla XLE and XSE trim come with blind-spot monitoring and rear cross-traffic alert. All of the Corolla's safety technology is easy to use. Many of the features can be turned off within the infotainment system. When the features are active, they remain on in the background, monitoring until an impending collision is detected. The Corolla's standard safety technology places it at the forefront of the compact car segment.

The Insurance Institute for Highway Safety has not yet rated the 2021 Toyota Corolla. The 2020 model year Corolla received the organization's 'Top Safety Pick' award, scoring highly in all crash-safety categories. The IIHS has one higher award, 'Top Safety Pick Plus.'

Likewise, the National Highway Traffic Safety Administration, the US government's crash-testing branch, gave the 2021 Corolla high ratings. It received a five-star overall front crash rating, five stars in the side pole crash category, and four stars in the rollover test.

The Toyota Corolla is one of the best values in the compact sedan segment. Its high crash-safety scores and driver assistance systems like lane-departure warning make it one of the most modern cars for its price. The Corolla is also known for having excellent reliability, and it maintains its value fairly well on the used market. Its blend of practicality, helpful tech, and expected dependability make the Corolla a superb value for its reasonable price. Some competitors have lower pricing and similar safety and reliability scores, but few have the Corolla's name recognition.

Judging from all of the Corolla's standard driver technology, it is safe to expect it would be generally well-equipped. All trims come with automatic LED headlights, power side mirrors, keyless entry, and automatic climate control. Heated front seats, push-button start, and a remote engine starter are standard on upper trims like the Corolla XSE.

The base Corolla L trim has a 7.0-inch infotainment touchscreen, and all upper trims come with an 8.0-inch unit. The system sits atop the dashboard. It has user-friendly menus, and Apple CarPlay, Android Auto, Bluetooth, and a WiFi hotspot are included. The Corolla XLE and XSE have satellite radio and HD Radio. A six-speaker audio system is standard; a nine-speaker JBL premium sound system is available in an optional package, including a dynamic navigation system. Another notable option is the Advanced Lighting Package, which includes curve-adaptive headlights and ambient LED interior lights.

Small cars like the Toyota Corolla gained popularity for several reasons; all of them practical. The Corolla's small exterior dimensions make it a good city car, capable of squeezing into tight parking spots and maneuvering around heavy traffic. Its fuel-sipping powertrain and high marks for reliability make it a low-maintenance daily driver.

The Corolla has decent interior storage, with a narrow center console bin, front door pockets, and a deep tray beneath the dashboard, and there are cupholders in both seating rows. The Corolla sedan has a small but usable trunk. It has 13.1 cubic feet, which is plenty for groceries, though competitors like the Kia Forte, Hyundai Elantra, and Honda Civic have more cargo space. The Corolla's rear seat folds, expanding space.

The Corolla Hatchback has a similarly small cargo area for its body style. The sporty tailgate opens to a 17.8-cubic-foot cargo bay, which is less than the Subaru Impreza, Honda Civic, and Hyundai Elantra hatchbacks.

The Toyota Corolla has gotten dinged in the past by critics for being dreary looking. In recent years, Toyota has restyled the Corolla multiple times, and the 2021 Corolla is the most stylish yet. Its sleek body silhouette, aggressive front grille and headlights, and the sporty SE and XSE trim levels help the Corolla gain some cred as an eye-catching small car. The Corolla Hatchback is even more stylish. Newer variants like the Nightshade Edition and the Corolla APEX trims include dark wheels and unique exterior styling.

The Corolla's cabin is likable but not as fashionable as some rivals. Toyota plays it safe with the interior, employing good-quality materials and a simple color scheme. The sleek dashboard, 'floating' infotainment screen, nicely-stitched steering wheel, and well-placed transmission gear lever gives the Corolla a modern and somewhat sporty appeal. Cloth upholstery comes standard; Softex leatherette trim is available. Leg room in both rows is good, though it is not as large as the midsize Toyota Camry, and some rivals have roomier interiors.

Those wanting a sportier interior should check out the Mazda3 or Honda Civic, while the Subaru Impreza feels pleasantly rugged and utilitarian inside. The Corolla lacks the same amount of character as the cars mentioned above. Nonetheless, the well-rounded Corolla is worth a trip to the dealership.

While the Toyota Corolla is not dull to drive, it is not the most fun car in its segment. Its standard 139-horsepower four-cylinder engine is underwhelming to drive fast, though it provides good enough for commuting and getting around town. The CVT is smooth and fuel-efficient. Toyota also offers a 6-speed manual on some trims, but it is not as sharp as the stick-shifters in a Mazda or Honda.

The available 169-horsepower engine livens things up, adding a bit of spark to the daily drive. But the Corolla's comfort-focused suspension lets down any sporty pretensions. The ride is smooth and absorbent, making the Corolla comfortable enough for long trips. The seats are also suitable, with decent support. An eight-way power driver's seat comes with the Corolla XLE. Outward visibility is excellent.

The Toyota Corolla is also available with a hybrid powertrain. Its innovative start/stop system, built-in battery pack, and regenerative braking system allow it to get 53/52/52 mpg, which are impressive figures.

Few competitors get better gas mileage than the Corolla. The Honda Civic's 1.5-liter turbocharged engine is sportier and thriftier, getting 32/43/36 mpg in EPA estimates. The Hyundai Elantra comes in an efficiency-maximizing Eco trim, which returns 33/41/36 mpg. 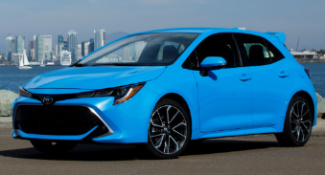 2021 Toyota Corolla Review
Autolist Editorial | Mar 12, 2021
The 2021 Toyota Corolla remains one of the best compact cars on the market today, with great safety technology, impressive fuel economy, and a reputation for reliability. More ... 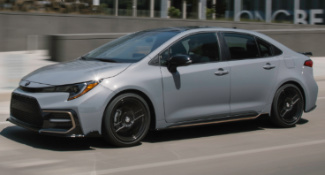