Would we buy one? No.

Vehicle Type: Four-door midsize crossover SUV with seating for up to 7.

All pricing is before options and includes a destination charge of $1,095.

A 3.0-liter six-cylinder engine making 224 horsepower and 215 pound-foot of torque is also available.

The 2020 Mitsubishi Outlander may have some flaws, but safety was a top priority for Mitsubishi. The Outlander is a very safe SUV amongst rivals in the segment.

All models including the base ES get standard safety features like rear door child safety locks, airbags, stability control, and automatic led headlights.

For more active safety equipment and features, look to the higher-tier trim levels, which offer a suite of enhanced features.

If you are looking for an economical and basic SUV with standard features, fewer bells and whistles, and more day to day practicality, the Outlander might be a decent choice.

There are 6 trim levels for the 2020 Mitsubishi Outlander:

Keep in mind that these prices do include a destination charge and are before options.

If it were up to us, we would stick with the lower-tier trims with this one. The ES is a great value, no-frills everyday use midsize SUV. There is not a whole lot to be gained from the higher-tier trims except the SEL and GTs PHEV (plug-in hybrid electric vehicle) configuration, which is notable.

The Outlander could use a refresh with its infotainment system. Many rivals in the segment like the Subaru Crosstrek and Toyota RAV4 offer more attractive connectivity and multimedia options. Still, if you just need the basics, the Outlander's infotainment system with a standard audio system can satisfy most consumer needs.

For 2020, the Mitsubishi Outlander has remained relatively the same as previous model years in how it manages cargo and interior storage options.

Cargo space is at 63.3 cubic feet with rear seats folded down, which makes the Outlander pretty average in the segment.

Rear seats are comfortable enough, but the third row is a little tight. Headroom and legroom are adequate in the second-row seat. Front seating fares better with seat adjustments and decent legroom.

Overall, it feels like Mitsubishi has been trying to find a footing in the crossover SUV market for some time, and maybe the ho-hum 2020 Outlander design can be forgiven a little with this consideration in mind.

Some attractive new touches like the special-edition SP trim with black exterior accents add some new style. The heated front seats and sunroof add a touch of luxury.

Mitsubishi delivers a mixed bag of tepid driving dynamics and some err in performance, with somewhat redeeming high notes, when it comes to how the Outlander drives.

We found the suspension to be a bit mushy and the cornering felt a little uncertain, even for our adventurous appetite. The weak 2.0-liter four-cylinder engine and two-wheel drivetrain configuration is disappointing and lacks character as does the 2.4-liter engine.

While the Outlander is no master of handling among rival midsize SUVs like its more capable competitors, the Mazda CX-3 and the Toyota RAV4, it still manages to hold its rank in the segment.

Fuel economy is on par with competitors in the segment. The Outlander PHEV hybrid offers fuel-conscious shoppers an efficient cost-saving alternative to the gas versions.

The EPA estimated gas mileage is 24/30/27 MPG for the base 2.0-liter four-cylinder engine two-wheel drive Sport. The 2.4-liter gets a mile uptick for city miles. 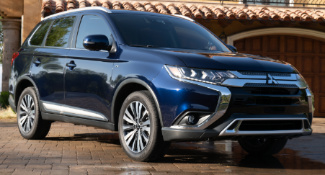 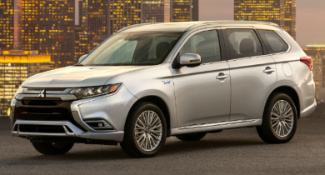