The 2019 Nissan Versa is the least-expensive new car sold in the US. With a starting MSRP of around $13,385, including destination, the Versa comes with strong fuel economy ratings and a lengthy warranty, making it a great alternative to buying a used car. It's built to provide practical and straightforward transportation for commuters, college students, city dwellers, and anyone else needing a small vehicle without too many bells and whistles. The Versa is available as a sedan or in Note hatchback form. There are four trim levels: S, S Plus, SV, and SR. A manual transmission comes standard on the base S sedan, while all other variants make do with an easy-to-use single-speed CVT.

No other small car can beat the Versa's starting price, but others offer more standard technology, better crash safety scores, a more refined interior, and sportier handling. This class tends to get the back-handed label of being 'basic transportation.' While some rivals break the stereotype, the 2019 Nissan Versa -- six years on since its last redesign -- keeps things simple, for better and worse. Competing subcompacts include the Chevrolet Spark, Chevrolet Sonic, Honda Fit, Kia Rio, Toyota Yaris, Mitsubishi Mirage, Hyundai Accent, and Ford Fiesta.

The Versa is around the bottom of its class when it comes to safety features. Federally mandated equipment like front-side and front/rear curtain airbags are present, along with traction control and stability control. But it doesn't go beyond what's required by law. Few subcompact cars come with very many driver safety aids, but the Versa is one of the most sparsely-equipped in this regard.

The Insurance Institute for Highway Safety (IIHS) rated the identical 2018 Nissan Versa Sedan Good (the top score) in most crash-test categories. Still, it received the lowest score, Poor, for the small overlap front driver-side test. No major 2019 competitor received a Poor in a crash subcategory. The Kia Rio even received a Top Safety Pick award, the second-highest honor in overall crash tests from the IIHS. The National Highway Traffic Safety Administration (NHTSA) gave the 2018 Versa four stars overall, out of a possible five. Meanwhile, the Honda Fit and Toyota Yaris received five stars.

Considering the Nissan Versa's ultra-low base pricing, many shoppers will not be surprised by what they end up getting for their money. It comes with a stereo, Bluetooth, cloth upholstery, and power steering, though power windows, power locks, and cruise control are only available on upper trims. It comes with a small, economical engine that isn't particularly fun to drive, but it provides pretty reliable transportation from place to place. The available automatic transmission, a CVT, is very smooth. Interior and cargo space are average, though the rear seats are reasonably comfortable. Acceleration is slow, the ride can be rough over uneven roads, and road noise can leak through at highway speeds. Unlike rivals like rare exceptions like the Honda Fit, most subcompacts don't hold their value exceptionally well.

The Versa has one of the stingiest standard warranties in its class, with three-year/36,000-mile bumper-to-bumper coverage. Roadside assistance is included for the same length of time. The drivetrain has a standard five-year/60,000-mile warranty. Most rivals include rust coverage. Mitsubishi, Kia, and Hyundai all offer far longer warranties than the Versa, with a five-year/60,000-mile bumper-to-bumper warranty and ten years or 100,000 miles for the drivetrain. It helps justify those models' slightly higher starting prices.

Upper trims of the Versa come close to $20,000, significantly impacting their value propositions, as the MSRP starts competing with larger and more refined cars. The Versa Note SR's $19,255 list price is pricier than the base trims of compact sedans like the Nissan Sentra, Kia Forte, and Hyundai Elantra. It is just hundreds of dollars away from a Toyota Corolla. Along with having a more refined interior and more modern styling, the Corolla and Forte also come with better technology, including a suite of advanced driver safety aids.

Like other modern cars, the Nissan Versa comes with an infotainment touchscreen. Nissan employs a seven-inch unit on all models, lifted from the company's other compact vehicles. It's nicely angled for viewing, and operation is a cinch, thanks to intuitive menus. There is Bluetooth hands-free phone and music streaming technology, as well as USB and auxiliary ports. Available tech includes keyless entry/ignition, an upgraded trip computer, Nissan Connect audio navigation and concierge services, satellite radio, Apple CarPlay, and Android Auto.

Many rivals have more available technology. The Honda Fit, Hyundai Accent, Kia Rio, and Chevy Spark are a few to offer automatic headlights. The Versa's power side mirrors lack a heating element, which the Accent and Rio provide optionally. The Accent also gets available heated front seats and a remote engine starter. The Spark comes standard with a WiFi hotspot, though a subscription is required. And numerous others make Apple CarPlay and Android Auto integration more widely available than just as an option on the top model -- even on Nissan's similarly priced Kicks small SUV. Overall, the Versa has user-friendly infotainment and available smartphone apps, but it isn't the top choice in the segment for technology.

The Versa's cabin offers adequate passenger space and a decent-sized trunk, but cabin storage is about average. There are two molded cupholders between the center stack and gear shifter, and the back seat gets cupholders, too. Both front doors have deep storage bins, and there's a glove compartment. Besides that, there isn't much space for sunglasses, snacks, and other small items. Cargo space is virtually best-in-class at 14.9 cubic feet for the 2019 Versa sedan. That's better than the 13.7 cubic feet offered by the Hyundai Accent or Kia Rio, or the 13.5 cubes provided in the Toyota Yaris. The 2019 Nissan Versa Note hatchback has better space, at 18.8 cubic feet, beating the Honda Fit and Chevrolet Spark. The 60/40 split-folding rear seat can be lowered to make even more room.

From the outside, the Nissan Versa sedan is starting to show its age. It's been six years since the last major redesign, and the Versa's exterior styling seems somewhat bulky and outdated compared to sleeker rivals like the Ford Fiesta and Toyota Yaris. The Versa Note hatchback has a much more modern exterior, with a sporty front fascia and angular taillights. Its grille and headlights are somewhat reminiscent of larger Nissans like the Sentra and Altima.

The Versa's cabin features a large steering wheel, a low dashboard, and a streamlined center console, giving it a modern and welcoming appeal while enhancing interior space, ease of use, and outward visibility. Cloth upholstery comes standard on all trim levels. The seats are pretty comfortable, though not as supportive as larger Nissans, which have amongst the best seats in their respective classes. Some subcompact rivals like the Toyota Yaris have available leatherette seating, while the Honda Fit offers leather on its top-shelf EX-L trim level.

Despite the Versa's lack of driver assistance features like blind-spot monitoring, its tall windows and thin side pillars provide excellent outward visibility, particularly with the boxy hatchback.

The Versa comes with a 1.6-liter inline four-cylinder gas engine. It generates 109 horsepower and 107 pound-feet of torque. That's about average power for a subcompact car, with significant rivals' output ranging from 98-130 horsepower. It's connected to a five-speed manual transmission on base S MT trim or a continuously variable transmission in all other variants. Front-wheel-drive is the sole drivetrain option.

Acceleration is typically lethargic for this class, but the CVT is smooth and economical. Braking is about average, with a light curb weight and front ventilated disc brakes compensating for the rear drums. Handling is secure but not sporty. Rivals like the Toyota Yaris, Ford Fiesta, and Honda Fit are much more lively to drive.

On the road, ride quality is pretty good. The suspension isolates the cabin fairly well from road imperfections, though it can be jarring over potholes and bumps. The noise level for everyday driving is below-average. Some competitors have been interior insulation, and this is particularly clear in highway driving. Interior fit and finish is also below-average, with low-quality plastics used in certain places. There's adequate interior space for a small car, especially for back-seat passengers.

While the 2019 Nissan Versa does not differentiate itself from rivals in many respects, it has excellent fuel economy. While the Environmental Protection Agency (EPA) reports Versa models equipped with the manual transmission return a respectable 27/36/30 mpg city/highway/combined, adding in the CVT boosts those figures to 31/39/34 mpg. Those are great EPA numbers for a non-hybrid.

By comparison, the Ford Fiesta gets 30 mpg combined, while the Kia Rio and Hyundai Accent return roughly 32 mpg. Notable exceptions include the Toyota Yaris and Honda Fit, rated at an excellent 35 and 36 mpg, respectively.

The Nissan Versa sedan comes in three trim levels: S, S Plus, and SV. The Versa Note hatchback is available in S, SV, and SR trims. All have the same engine and drivetrain. A manual transmission comes standard on the lowest trim, while a CVT is standard on upper models.

The Nissan Versa S Plus sedan retails for around $15,525. It adds cruise control, a CVT, tilt steering, and a rear spoiler.

If we were in the market for a Nissan Versa, we'd look at the Versa Note SV. Its modern styling, practical hatchback, and better list of standard features make it a decent value for $17,445. We'd also consider waiting until the 2020 model year when the Versa receives a welcome redesign. 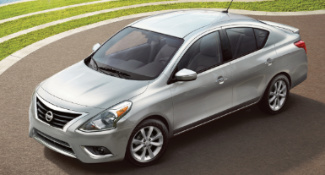 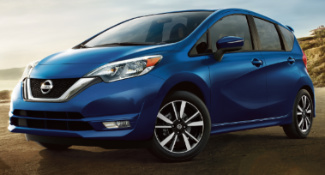 2019 Nissan Versa Review
Autolist Editorial | Jun 18, 2020
The 2019 Nissan Versa is a subcompact sedan and hatchback that do well as economical, affordable transportation, though they face stiff competition from other small cars. More ...