Would we buy one? Yes, but there are also better choices.

Powertrain: A 2.5-liter four-cylinder with 176 horsepower and 172 lb-ft of torque, with a six-speed automatic transmission. Front-wheel drive is standard, all-wheel drive is optional.

A gas-electric hybrid with a four-cylinder engine and electric motor, with 194 horsepower and 206 lb-ft of torque, and all-wheel-drive.

The 2018 Toyota RAV4 received a five-star overall safety rating from the NHTSA, the federal agency's top rating. It is an IIHS Top Safety Pick for scoring Good in most crash tests. The only test where it scored lower was Poor for Small Overlap Front: Passenger Side.

The 2018 RAV4's pricing is right on the money with its rivals, the Honda CR-V and Ford Escape, two very strong contenders. Elsewhere in this competitive segment, the Mazda CX-5 and Kia Sportage have lower base prices but don't offer quite as much base tech. Hybrid availability also bolsters its value against some of its competition.

A fully-loaded RAV4 sits below the mid- to high-$30,000 price range; this beats out the Ford Escape and Volkswagen Tiguan, which get significantly pricier.

Higher up on the pecking order, the SE trim adds the Entune Audio Plus system with a built-in navigation system, SiriusXM satellite radio, Siri Eyes Free, HD radio, as well as traffic and weather updates. As trims go higher, more features are added, such as a 360-degree camera, heated steering wheel, dual-zone climate control, and JBL sound system, but no Apple CarPlay or Android Auto connectivity is available.

For being a small SUV equipped with a four-cylinder engine, the RAV4 has a decent towing capacity. FWD models have a maximum towing capacity of 1,500 lbs, while the Toyota RAV4 Adventure trim with AWD can lug along as much as 3,500 lbs with the optional towing package.

The more rugged Adventure trim has 6.5 inches of ground clearance and standard all-wheel-drive, giving it a more impressive approach and departure angles of 28-degrees and 23-degrees.

The RAV4 also has adequate cargo space for its segment: 38.4 cubic feet behind the rear seating area, though when that's folded down, its cargo area expands to 73.4 cubic feet. A power liftgate as standard makes loading in cargo a tad more accessible, too.

The roominess continues with passenger room dimensions. The headroom comes in at a maximum of 39.8 inches for the front seats and 38.9 inches for the rear seats. Legroom is Amtrak-rivaling at 42.6 inches up front and 37.2 inches in the rear.

Along with the Mazda CX-5, the 2018 Toyota RAV4 to be one of the best-looking small SUVs on the market. It blends in nicely with Toyota's modern design language, and the Adventure trim features some athletic lines and fog lights that are reminiscent of the larger Highlander, 4Runner and Land Cruiser.

The RAV4 has comfortable, well-bolstered seats, an optional moonroof, and good visibility. But the interior materials are subpar and feel more chintzy than the competition, such as the Volkswagen Tiguan and Mazda CX-5. It's a significant sore point for the Toyota and makes it feel dated.

Even though it has competitive horsepower ratings and relatively average weight for the class, the Toyota RAV4 comes up towards the back of the pack. It also strains when asked to accelerate and struggles to keep up on hills. The interior also gets loud with engine noise. A Honda CR-V is better in this regard.

Its soft suspension does mean a supple, insulated ride in city driving and commuting. But that doesn't bode well for handling, which isn't as confident as a Ford Escape or Mazda CX-5.

The non-hybrid Toyota RAV4 fuel economy is decent for the class. The EPA has rated it at 22 MPG city and 28 MPG highway.

The hybrid stacks up a lot better; despite having more power, it achieves 34 MPG city and 30 MPG highway. 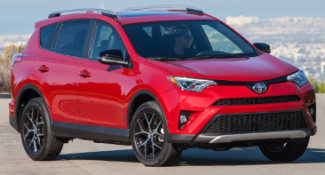 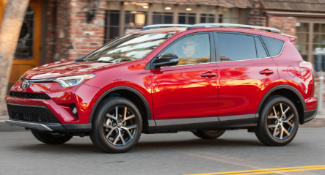