Powertrain: A 2.4-liter four-cylinder with 184 horsepower and 180 lb-ft of torque, with a continuously variable automatic transmission (CVT), and front-wheel-drive. All-wheel-drive is optional.

A turbocharged 1.5-liter four-cylinder with 190 horsepower and 179 lb-ft of torque, with a CVT, and front-wheel-drive. All-wheel-drive is optional.

The driver assistance technology available on the CR-V is incorporated into the Honda Sensing suite. That includes forward collision warning with collision mitigation, lane departure warning with lane keep assist, blind-spot monitoring, and adaptive cruise control. It's standard on every model except for the base LX. Pedestrian detection comes on EX-L and Touring models, while only the top Touring model gets LED headlights with automatic high beam control. Even though these features don't come on every CR-V, the fact they're available at all is impressive among 2018 compact SUVs.

The CR-V's pricing starts slightly higher than some of its rivals but comes with more equipment as the trim levels get higher. For $25,000, the LX comes with 17-inch alloy wheels, a multi-angle rearview camera, automatic climate control, LED running lights, and Bluetooth. But the better-equipped EX starts at roughly $2,000 more and adds the turbocharged engine, dual-zone automatic climate control, power driver's seat, heated front seats, power moonroof, satellite radio, and Apple CarPlay and Android Auto compatibility. Add all-wheel-drive, and it comes right around $30,000, an excellent value for this class.

Alternatively, go for the top-end Honda CR-V Touring that has the LED headlights, hands-free power liftgate, rain-sensing windshield wipers, nine-speaker premium audio system, leather seats, roof rails, and built-in navigation, and it circles right in at $35,000. Loaded versions of competing vehicles can push up against the $40,000 mark.

All but the base CR-V LX have numerous technology features covered. Apple CarPlay and Android Auto compatibility come with an 8-inch touchscreen to operate Honda's infotainment system. A built-in Garmin navigation system is standard on the top Touring trim and optional on EX-L. And every model gets automatic climate control, EX adds keyless entry and push-button start, EX-L gets a power liftgate, and the Touring makes that tailgate hands-free.

That said, the touchscreen falls behind the times. It's slow to respond, has mind-boggling menus, the Garmin navigation looks like a children's show, and it relies too heavily on touch-sensitive controls – the volume knob being the only option. The Chevrolet Equinox, Hyundai Tucson, and Volkswagen Tiguan, to name but a few, do this far better. The alternative is the LX's 5-inch monochrome screen and physical volume and tune knobs, which looks like a late 1990s relic. It's bizarre considering the new Honda CR-V arrived in 2017.

The CR-V is on the larger side of the segment. With the seats up, there is up to 39.2 cubic feet of space. Fold them down with a convenient one-touch lever, and space expands to a mostly flat 75.8 cubic feet. Some midsize SUVs have less space. That's more than ten cubic feet over the relatively diminutive Hyundai Tucson, and usefully more than the Subaru Forester and Toyota RAV4.

Interior storage is abundant, with cubbies everywhere, a trick sliding cupholder, and a center console that can easily hide soft bags. The CR-V lacks a third-row seat feature like the Mitsubishi Outlander and VW Tiguan, but those perches are so small and cramped it hardly matters in the end. And it's easy to access the rear seats, anyway, with easy-to-find LATCH points for child seats.

The CR-V has a relatively generic compact SUV profile. Honda attempted to dress it up with LED accents and glittery LED headlights and fog lights on the high-end model, but it sticks closely to the brand's lineage.

It's a similar story inside, where it's very obvious the CR-V is part of Honda's latest vehicles. Apart from the complicated infotainment system, all of the other controls are well-marked and have a hearty tactile feel. The part-digital instrument panel is a little glittery, but it's mostly easy to read. Material quality is very good, and the new front-seat design makes them exceptionally comfortable. Four adults will fit easily. The only oddity is the Touring model's fake wood trim that's clearly not from a tree and invokes old American cars more than anything else.

The LX trim gets a 184-horsepower, 2.4-liter four-cylinder engine, while all other variants receive a 190-horsepower, turbocharged 1.5-liter four. All get a continuously variable transmission, with either front or all-wheel-drive. Oddly, the LX's engine makes an additional one lb-ft of torque. But the turbocharged one is a more flexible engine and makes the drivetrain more tolerable. It's not particularly powerful for the class, and no match for a Ford Escape or Mazda CX-5, but it does the job. The transmission is no worse than any of its type, but there isn't much selection for manual shifting, and it's still not as eager to supply more power than a six-speed automatic transmission in the Ford, Mazda, and many other competitors.

But that hardly matters because the CR-V is just fine to drive. It's competent, nothing more, nothing less. There isn't much feedback through the steering wheel, but it's par for the course. Handling is secure but not engaging. And the ride is controlled. The CR-V does everything it should be asked for well.

While LX models are merely competitive for the class, the rest of the CR-V line gets gas mileage more like that of a midsize sedan. The 30 mpg combined figure is notable, too, besting some other competitors with turbocharged four-cylinder engines and better than many subcompact SUVs. And it's not even far off of the Toyota RAV4 Hybrid, which is rated at 32 mpg combined. 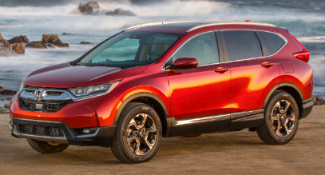 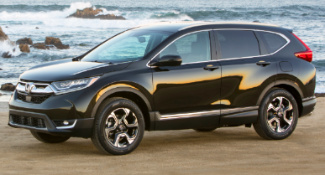 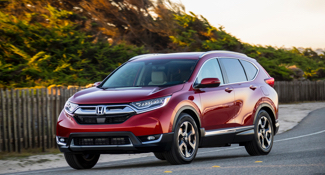 Review: 2018 Honda CR-V
David Undercoffler | Feb 26, 2018
The CR-V compact crossover is Honda’s most popular model, offering all-wheel-drive, a new turbocharged engine and the HondaSensing safety tech. But is it the most well-rounded competitor in the segment? More ...