Would we buy one? Probably not.

Powertrain: All trim levels of the Grand Caravan are powered by the same 3.6 liter V6 engine, making 283 horsepower, and backed up by a six speed automatic transmission. The Grand Caravan is front-wheel drive, no AWD or hybrid option is available.

The serviceable Pentastar engine does have a good reputation, and is commonly used across the Chrysler, Jeep, and Ram brands.

Although the Grand Caravan does pack seven standard airbags and stability control, it lacks most of the safety trimmings of more modern competition. A backup camera and latch safety system do help the Caravan meet the bare minimum safety requirements for most families.

The IIHS and NHTSA penalize the Caravan for not offering, even as options, features standard on many minivans currently on the market. Safety technologies like automatic braking, lane-departure warnings, or blind-spot monitoring are not available. The Caravan also performed poorly in the small overlap crash-test, making it one of the least compelling options in the segment when it comes to safety.

The Dodge Grand Caravan SE has the lowest MSRP in the segment. The best value Dodge offers is in the Grand Caravan SE Plus, which includes more than the bare-minimum, but doesn't put the van in the price range of much better equipped competitors, like its cousin, the Chrysler Pacifica.

For those looking for a basic utility van or a family hauler that doesn't break the bank, the Grand Caravan may be a good option.

Although not a leader in the segment, the Grand Caravan does have a few techy tricks, including the Uconnect interface to run climate control and infotainment systems. The user interface runs through a standard 6.5-inch touchscreen, but is dated, leaving out the availability of Android Auto or Apple CarPlay. The SE Plus and SXT trims have optional Bluetooth connectivity.

There is also an optional Blu-ray/DVD Player entertainment system for the rear seat passengers, including wireless headphones for those family road trips. A single optional USB port allows for charging and connecting of devices. Throughout the vehicle, there are three 12-volt outlets for plugging in a charger.

Vans are made for practicality, and in that category the Dodge Grand Caravan is one of the best. Available Stow 'n go storage with fold flat seating provides nearly endless configuration to accommodate people, pets, and all sorts of gear. The rear seats can even be folded to face out the back of the optional power liftgate, useful for tailgating or a drive-in movie. Storage bins and cubbies abound including a large storage space under the rear cargo floor, and almost too many small places for passengers to store belongings, or cram Cheerios.

Stow 'n Go seating for seven includes bucket seats for the front and second row, with a 60/40 split folding bench in the third row. When tucked away, those seats leave a voluminous cargo space of 143 cubic feet, with a true flat floor.

Inside and out, the Grand Caravan remains relatively unchanged from previous versions, as it enters its final model year. The Caravan doesn't scream cool, but the optional Blacktop Package helps somewhat with the exterior styling. Checking that box costs $995, but includes blacked-out wheels, headlight surrounds, and grille. The Blacktop Package also adds to the van's functionality by including rooftop rails and crossbars.

The interior is available in black or light gray cloth. Black leather and suede upholstery with silver stitching is optional for the SXT. The interior fit and finish feels dated, like the rest of the vehicle.

The V6 engine and six speed transmission show their age when compared to the competition. The Caravan drives adequately enough, but never lets you forget you are driving a minivan. Optional heated steering wheel and front seats are the most luxurious appointments available for the driver.

The Grand Caravan won't wow anyone, unless they are just trying to move stuff or people from point a to b. It is a utilitarian vehicle in the last year of its long run, and it shows.

With only one drivetrain combination available, all Grand Caravan models score EPA estimated mileage of 17 MPG in the city, 25 MPG highway, and 20 MPG mixed.

These fuel economy numbers are not outrageously poor, but do fall short of the competition. 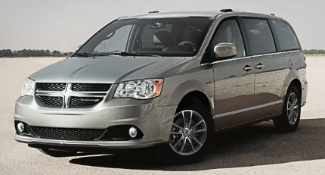 2020 Dodge Grand Caravan Review
Autolist Editorial | Nov 03, 2020
While it may be a good value for those looking to simply transport people and stuff, in its final production year, the Grand Caravan shows its age. More ... 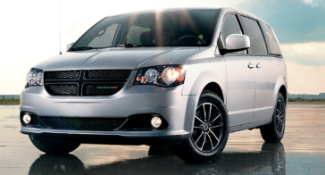