Would we buy one? Probably!

Powertrain: The Nissan Sentra 2017 standard models have a 1.8-liter 4-cylinder engine with 124-horsepower. The base S model comes with a six-speed manual transmission or Xtronic CVT. All the other trims contain the CVT standard.

The Nissan Sentra SR Turbo and Sentra NISMO feature a turbocharged 1.6-liter 4-cylinder engine with 188-horsepower and a 6-speed manual transmission or CVT that includes a wider gear ratio spread. All trim levels are front-wheel-drive (FWD).

Most 2017 Nissan Sentra owners think that the vehicle provides a good value for what it offers within the compact sedan category. However, it ranked lower in some tests performed by one major magazine in performance and handling, just edging out the Toyota Corolla.

It does have relatively high predicted operating costs, according to some industry reporting. Some critics recommend the Sentra as a used-car pick unless you don't mind some extra maintenance and repairs. However, it has better fuel economy in the city and highway, balancing out some of its value.

As of 2017, the Nissan Sentra was in its seventh generation. There are 5 Nissan Sentra trim levels: S, SL, SR, SR Turbo, SV, and NISMO.

The Nissan Sentra 2017 model comes with various tech features that the average driver is sure to love. There is a standard trip computer on all trim levels, along with a voice-activated infotainment system. It also comes with an audio System, AM/FM radio, a CD Player, remote audio controls, four speakers, Bluetooth capabilities, and a USB port. NissanConnect allows external devices to be connected.

The Technology Package features are relatively easy to use, including the 5.8-inch touchscreen and its simple menus. The downside is that it

This Nissan Sentra model is efficient, making it ideal as a compact sedan comparable to the Toyota Corolla and Kia Forte. It's great for students, young professionals, small families, and retirees. Features include a six-way driver's seat, a spacious trunk with 15.1 cubic feet of stowing area, 60/40-split-folding seats that allow for more cargo space, and large console storage in the center of the front seats, which has a sliding armrest and contains cupholders.

The 2017 Nissan Sentra's interior is organized, spacious, and comfortable if a bit on the dull side. The seats and space within the interior allow for even taller individuals to sit without a problem.

The seats have plenty of cushion and a design that won't lead to fatigue even while sitting for longer drives. The steering wheel is large, so it provides comfort and ease-of-use.

The base trim features 16-inch steel wheels with wheel covers that are nice if you love a clean, streamlined appearance. The power heated outside mirrors are easy to use and ideal for all weather conditions.

Style and design exceed that of a typical compact sedan, with plenty of interior and cargo space. The NISMO trim features a rear spoiler, front fascia, dark chrome accents, black side mirrors, and stitched sports seats. Most trims come with cloth upholstery, but the Nissan Sentra SL gets leather. A power sliding glass moonroof is included on the Sentra SR trim and above.

The Nissan Sentra has 177 lb-ft of torque. It's important to note that the 2017 Sentra SR Turbo and NISMO have better handling and horsepower. The SR Turbo model does contain 17-inch wheels with electronic power steering, a larger steering motor, and revised tuning for turbocharged performance.

The steering is very smooth, and the acceleration also is favorable. It does have a lack of power for the lower trim levels. The braking is strong, with standard drum brakes. However, there's nothing remarkable about its ride quality and handling. Visibility is terrific due to the large side mirrors.

This vehicle was designed to optimize comfort and safety over speed and flashy performance. Standard climate control includes heating and air conditioning functionality.

The 2017 Nissan Sentra has an EPA-estimated 32 mpg overall with the SR Turbo and NISMO. It has a tank capacity of 13.2 gallons. When you have it in the Sport mode, it has a great deal of pickup on demand, though when you turn this off, you get better fuel efficiency. It's comparable in EPA fuel economy to the Kia Forte and Hyundai Elantra, and it's slightly more efficient than the larger 2017 Nissan Altima. 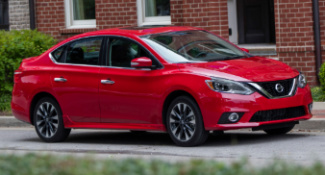 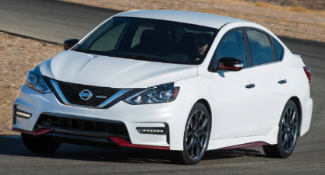