Powertrain: A 179-horsepower, four-cylinder with a continuously variable automatic transmission (CVT) and front-wheel-drive.

All but the base trim of the 2017 Nissan Altima sedan have a rear backup camera. The base trim does have key safety features like front side airbags, front and rear curtain airbags, an alarm, a tire pressure monitor, stability control, and traction control, though. The Nissan Altima 2.5 SV and SL trims come standard with blind-spot monitoring and rear cross-traffic alert, which help the driver safely change lanes and back up onto a road.

Forward-collision warning, forward emergency braking, and adaptive cruise control are optional on the Nissan Altima and are only available on the top-tier SL trim. It would be nice if Nissan offered these desirable safety features on lesser models and didn't bundle them into a $2,190 package.

The Insurance Institute for Highway Safety awarded the 2017 Altima sedan with its Top Safety Pick Plus designation, the organization's highest overall safety rating. The IIHS award applies specifically to the SL trim with optional Technology Package, as it comes with forward-emergency braking and LED headlights.

The Nissan Altima has a slightly lower starting price than popular competitors like the Honda Accord, Toyota Camry, and Mazda 6. The Chevrolet Malibu and Kia Optima do come with slightly lower pricing. For a reasonable price, Nissan comes with excellent fuel economy and a roomy, quiet cabin. It has the best front headroom and legroom of those choices, though the rear-seat space lags the group slightly.

The Honda Accord and Mazda 6 are available with manual transmissions, making them more engaging to drive. The Altima is available with V6 power and a sport-tuned suspension, but its handling still isn't as sharp as the Mazda's. The Altima's V6 and CVT work well together, but it's not as smooth a pairing as Toyota's excellent V6 and six-speed automatic transmission. Overall, the Altima sits in the middle of the pack, balancing comfort with sportiness without being overly defined by either.

Nissan Altimas have historically kept their value reasonably well, but brands like Toyota and Honda tend to depreciate slower. The 2017 Altima has a reputation for superb reliability, but so do the Honda Accord and Toyota Camry.

Fully equipped, the top-of-the-line Altima 3.5 SL has a long list of amenities, with things like leather seats, dual-zone climate control, 18-inch alloy wheels, an auto-dimming rearview mirror, a navigation system, and a premium audio system. It also gets a heated steering wheel, which is rare for a midsize car. Priced with an MSRP (with destination) of $33,585, it's more expensive than the top-flight Camry XLE V6 but less expensive than an Accord Touring.

All 2017 Altimas come equipped with tech specs like a rearview camera, CD player, Bluetooth music streaming, and a front auxiliary input. The base trim doesn't come with many other tech features, but stepping up to the S trim increases speakers' number for the sound system from four to six. It also adds an infotainment screen that is five-inches diagonally and has voice-command features. A USB port also comes standard.

The Nissan Altima is a practical midsize sedan that is easy to drive every day. Its cabin is roomy enough for tall adults, and the seats are very supportive. There is a large, 15.4-cubic-foot trunk. The 60/40 split-folding back seat allows for more cargo space, and the second-row seatback has a built-in armrest that folds down, containing two cup holders.

The Altima's spaciousness, comfort, and excellent outward visibility make it a very good car for various driving scenarios. Standard automatic headlights and keyless entry add convenience, as does the versatility of including both a CD player and smartphone-friendly Bluetooth.

The interiors of Nissans tend to be somewhat sporty in style yet functional and relaxed in design. The Altima is a case study in how this works, with brushed metal accents and driver-focused controls that are elegant without being too flashy. The interior is straightforward and user-friendly, with a good driving position, large instrument gauges, and a simple controls set.

Like other Nissans, the Altima's cloth seats are fantastic, among the most comfortable in their segment. Nissan nicely balances roominess with support, making the Altima a good choice for long road trips and moderately sporty driving.

The interior feels well-constructed and refined. There aren't noticeable panel gaps, nor are there rattling noises when the car is in motion. Nissan paid close attention to detail with the Altima's interior, and it paid off. The cabin uses many plastics, and it doesn't feel as upscale as the Toyota Camry or Honda Accord, especially the upper trims of those cars.

After a significant makeover for the 2016 model year, the 2017 Altima sedan's exterior looks like a new car and sportier than ever. The front fascia is attractive, with sweeping headlights and a cascading grille. It looks closer in styling to the full-size Maxima sedan.

The Altima is enjoyable to drive, but not as fun as some competitors. Acceleration with the base four-cylinder engine is adequate; equipped with the V6 engine, the Altima is downright fast. The Nissan Altima 2.5 SR and 3.5 SR trims, the latter includes a V6, both come with a sport-tuned suspension. That gives the Altima a slightly firmer ride and better handling, but Mazda makes a sportier sedan for those seeking driving thrills.

The Altima excels as a comfortable FWD cruiser, similar to the Toyota Camry. Trim levels without the sport suspension have a soft ride that is quiet and relaxing. The Altima has the best seats in its class and an airy cabin, making it a pleasant daily driver (and a nice test-drive).

Outward visibility is great, thanks to tall side windows and thin roof pillar.

The Nissan Altima has excellent fuel economy. Its base four-cylinder engine gets an EPA-estimated 31 mpg combined, which bests equivalent motors from Honda and Toyota. The 3.5-liter V6 offers roughly the same power as those companies V6's, and it also edges them out, at 26 mpg overall.

Despite those impressive gas mileage figures for gasoline engines, Nissan does not offer a hybrid engine in its 2017 Altima. Meanwhile, competitors Toyota and Honda both do. The Camry's hybrid four-cylinder returns 40 mpg overall; the Accord gets a staggering 48 mpg. 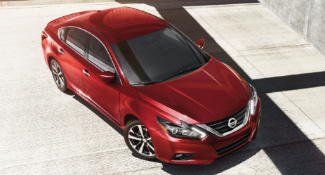 2017 Nissan Altima Review
Autolist Editorial | Nov 05, 2020
Comfortable and fuel-efficient, the 2017 Nissan Altima is a midsize sedan with available driver safety technology. It competes against the Honda Accord and Toyota Camry. More ... 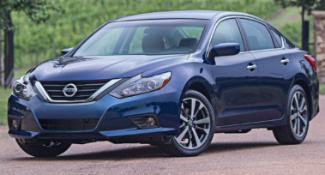