Powertrain: All four trim levels come standard with a 3.5-liter V6 engine that outputs 284 horsepower and 259 lb-ft of torque.

A continuously variable automatic transmission and front-wheel drive are standard across all models.

The National Highway Traffic Safety Administration gave the 2020 Nissan Pathfinder an overall safety rating of five out of five stars. It received four stars in the rollover and frontal crash tests and five stars in the side crash test.

The Insurance Institute for Highway Safety named the 2020 Nissan Pathfinder a Top Safety Pick and awarded it the highest 'Good' rating in five crash tests. The IIHS gave it the second-highest rating of Acceptable in the passenger-side small overlap front test.

The Pathfinder Rock Creek Edition is available for this model year and will cost you $995 and adds on synthetic leather upholstery, a tow hitch, and black exterior accents.

With a well-balanced combination of cost and desirable content, the Pathfinder does award you the good value behind its pricing.

When comparing the Pathfinder against closely-matched rivals like the Honda Pilot, the base trims are similarly priced; however, the Honda has higher trim levels that exceed Nissan's pricing.

The warranty coverage behind Nissan is not as strong as other rival warranties on the market. The Volkswagen Tiguan has extended coverage while Hyundai and Kia have longer warranty periods.

The 2020 Pathfinder has an outdated infotainment system that does not keep up well with rivals like the Toyota Highlander. Neither Apple CarPlay nor Android Auto is supported, and the system has poor graphic display quality.

Tech features in the Platinum trim can be upgraded to include a rear-seat entertainment system for $1,700.

While the Pathfinder may not feel as luxurious as many newer competitors, it does have upscale trimmings and comfortable seats, as well as ample cupholders and USB ports.

The front seats are reasonably spacious and provide excellent cushioning, especially the driver's seat. The second-row has ample legroom, and the seats slide and flip quickly for easy access into the third-row. Unfortunately, the third-row is tight on space with minimal legroom for adults.

The folding second-and third-row seats allow for variable seating and cargo configurations. The Pathfinder provides an average amount of cargo space for a mid-size crossover; however, the Ford Explorer does offer slightly more.

The Pathfinder boasts a towing capacity of 6000 pounds, which puts the Nissan near the top of its class.

The Pathfinder has not changed its styling and design over the past few years. If you wanted a change, you would need to add on the Rock Creek Edition package to gain tough-looking exterior elements such as the black mesh grille, unique alloy wheels, and black roof rails and side mirrors.

The exterior design is family-friendly, and the 2020 model year has continued with the signature design styling of the V-Motion grille, LED daytime running lights, and boomerang-shaped headlights.

Reviews have noted that comfort overrides the Pathfinder's capability, but it has a maximum towing capacity of 6,000 lbs, which 1,000 more than most rivals.

The interior is brightened up with lighter shades and colors, and while there is a long expanse of soft-touch comfort materials, the broad dashboard has an outdated infotainment system.

Despite the rugged name, the Pathfinder has not been designed for off-roading. It only has 7-inches of ground clearance and lacks a transfer case that has low-range gearing. The all-wheel-drive system adds all-weather traction on slick and snow-covered roads.

The CVT in the Pathfinder is relatively adequate, but when driving up a hill, the engine's coarser notes are revealed, and the automatic transmission takes some time to catch up with the driver's instructions.

Stability and confidence require more than raw speed, but the V6 engine provides enough power for everyday travels, and the firm suspension keeps the body stable around bends. The steering can feel heavy at times, but the overall ride is comfortably smooth.

Many reviews suggest staying with the standard 18-inch wheels since models with 20-inch wheels offer a jittery and uncomfortable ride over rough pavements.

The Nissan Pathfinder competes well with its rivals with a competitive fuel economy for a family crossover. Nissan has incorporated modern engine advancements that include mirror bore cylinder coating and direct fuel injection to streamline the combustion process and lighten the overall engine weight.

The Pathfinder overtakes the Honda Pilot FWD 3.5-liter engine with better fuel consumption, but it loses to the Toyota Highlander, which has an EPA of 21/29/24 mpg. 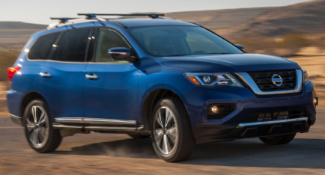