Powertrain: A turbocharged, 2.0-liter four-cylinder engine with 245 horsepower, a 6-speed automatic transmission, and front-wheel-drive or all-wheel-drive.

A 3.5-liter V6 with 280 horsepower, a 6-speed automatic, and front-wheel-drive or all-wheel-drive.

A twin-turbocharged, 2.7-liter V6 with 315 horsepower, 6-speed automatic, and all-wheel-drive.

The National Transportation Highway Safety Administration (NHTSA) gave the 2018 Edge five stars in overall testing, its highest rating. The Insurance Institute for Highway Safety (IIHS) gave it the top 'Good' rating in front and side crash tests, as well as for roof strength and head restraint performance. The Edge earned an Acceptable rating for the small overlap front crash test, the second-highest score. But Ford's headlights were given the lowest 'Poor' score because of only fair visibility with high beams. Front crash protection with optional adaptive cruise control and forward-collision warning was rated Basic, the lowest score.

While a rearview camera is now standard, parking sensors, adaptive cruise control with forward-collision warning, blind-spot monitoring, and lane-keep assist are all options. Some rivals are making more of these features standard. The Edge has optional inflatable rear seat belts that are meant to reduce chest injuries in the event of a crash, an option only seen on Ford vehicles so far.

Pricing for the base Ford Edge SE starts around $30,000 and is mostly well-equipped with the 2.0-liter EcoBoost turbo-four, 18-inch alloy wheels, cloth seats, keyless entry, push-button start, a six-speaker audio system with Bluetooth, and a USB port. But it's about $4,000 more than a Subaru Outback that includes all-wheel-drive, an option on the Ford and a similarly-equipped Nissan Murano has more horsepower and costs slightly less. SE Sport is the first way to opt into the better infotainment system and satellite radio. The SEL trim adds niceties such as dual-zone automatic climate control, leather upholstery, a power driver's seat. It opens the door for other items such as navigation, a panoramic sunroof, and driver assistance systems such as adaptive cruise control, blind-spot monitoring, and lane-keep assist. Ford Edge Titanium models add better upholstery and other luxuries, but it pushes past $40,000.

The Ford Edge Sport trim, however, represents something of a bargain. Only the Jeep Grand Cherokee with its optional 5.7-liter V8 can compete in terms of power, and even then, it's far from a performance vehicle compared to the Edge Sport's 315-horsepower, twin-turbo EcoBoost V6 engine and all-wheel-drive drivetrain. The Ford is tens of thousands of dollars less expensive against premium European rivals with similar horsepower, such as the Mercedes-Benz GLC 43 or Audi SQ5.

For 2018, the Edge incorporates Ford's new Sync 3 infotainment system, replacing the temperamental MyFord Touch. It uses an 8-inch touchscreen and can also be operated with voice commands, controlling audio and climate functions. Sync 3 also includes Apple CarPlay and Android Auto and allows for the addition of a built-in navigation system. But the system itself isn't the sharpest out there; the processor is still slower than that on the Buick Envision, for example. And some of the menus are illogically laid out. Worse, it's not standard on all trim levels, meaning some models do without smartphone connectivity other than Bluetooth.

Stability control and a full complement of airbags are standard. Other available features include an active park assist feature to automatically perform steering functions to get the Edge into parallel parking spaces. In addition to the driver assistance technology, options include a premium Sony audio system, DVD rear entertainment system, a heated steering wheel, heated and cooled front seats, a hands-free power liftgate, and a front-mounted 180-degree camera with washer.

The Edge is competitive in its class for passenger and cargo space, with a broad and well-shaped rear seat and a square-shaped cargo area. It's pretty much on par with the externally smaller Subaru Outback, Hyundai Santa Fe, and Kia Sorento, making it a sound choice for small families with child seats or those who need a large cargo area sometimes. But the Edge lacks the option of a third row of seats like the GMC Acadia and Kia Sorento. Towing capacity differs between engine choices and is rated at a maximum of 1,500 pounds or 3,500 pounds. That's competitive for the class, apart from the Jeep Grand Cherokee and its available V8 engine.

Even with its optional all-wheel-drive, the Edge is far removed from being an off-roader. Especially on the Sport model with its low exterior spoilers and large wheels, the Edge is very suited to on-road use, but not much in the way of anything more than a polo field. For rough trails, a Subaru Outback has far more ground clearance, while a Jeep Grand Cherokee offers a low-range for the four-wheel-drive system and optional air suspension for added ground clearance or easier access in and out of the vehicle.

While the exterior design looks familiar and clearly like a family member of the Ford Escape, it pays dividends for practicality and visibility. There are large windows that make seeing out of the Edge easy for both the driver and small kids in the back. Sport models are by far the most aggressive, with large wheels and tires and a dramatic body kit that looks like it came off a hatchback, not something with an SUV body style.

The interior offers a reasonable amount of storage, with cupholders and door pockets, and center console storage. But in this class, it's nothing groundbreaking or remarkable. Worse, the material quality is hit-or-miss, with some nice leather upholstery on SEL and Titanium models, but hollow plastics and some shiny finishes. The Grand Cherokee and Murano are better in this regard.

The standard turbocharged, 2.0-liter four-cylinder engine produces 245 horsepower and is satisfactory in most conditions. While it doesn't have as much horsepower as a Nissan Murano or six-cylinder Subaru Outback, it makes up for it with power that's available from almost idle. The Edge Sport's 315-horsepower twin-turbo V6 offers gobs of energy and is also incredibly smooth. The 285-horsepower V6 that's optional on Edge SE, SEL, and Titanium, however, isn't worth the upgrade because it has to be worked harder than the turbo four and makes a racket while doing so. A 6-speed automatic transmission is the only choice, and it could do with a couple more gears.

Where the Edge falls is its indifference to steering inputs and corners. The ride on standard models is fine but lacks the Murano or Buick Envision's refinement or an air suspension-equipped Grand Cherokee. Only the Sport model is remotely fun to drive but hardly holds up against more nimble performance SUVs. While the interior remains mostly quiet, it lacks the genuinely tranquil environment of the Buick.

While its four-cylinder engine produces far less power than the standard Edge engine, the Subaru Outback 2.5 is rated at 28 mpg combined with standard all-wheel-drive. Meanwhile, the Buick Envision] 2.5-liter is rated at 25 mpg combined, just one better than the FWD Edge 2.0-liter that has almost 50 more horsepower. Even the Jeep Grand Cherokee with its turbodiesel V6 only rates at 24 combined. For its class, the Edge is relatively fuel-efficient in 2.0-liter turbo form, and the Edge Sport compares well against similarly powered performance SUVs. But skip the 3.5-liter V6, as its performance isn't worth the fuel economy penalty. 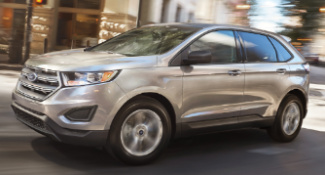 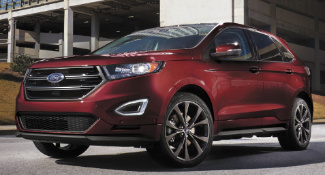