All-wheel-drive is optional on most trims.

There are also 2.0-liter four-cylinder hybrid and plug-in hybrid engine choices that make 188 horsepower and pair with a single-speed continuously variable transmission (CVT).

The Ford Fusion is a midsize family car with the elegant styling and swift handling of a sports sedan. It comes in five trim levels that range from comfortable to luxurious. Front-wheel-drive comes standard, and all-wheel-drive is available. There are powerful turbocharged engine options, plus two hybrid powertrains. A suite of driver safety technology is optional, helping prevent accidents and keeping everyone safe on the road.

The Fusion’s main competitors are the Chevrolet Malibu, Honda Accord, Hyundai Sonata, Kia Optima, Mazda 6, Subaru Legacy, and Toyota Camry. Most of those cars have comparable pricing and features, though the Honda and Toyota stand out from the pack with their enhanced refinement, predicted reliability, and ability to hold their value. The Mazda 6 is sportier to drive, though the Fusion’s available turbocharged V6 engine is one of the fastest of any family car. The Subaru Legacy comes with standard all-wheel-drive and a lower starting price, making it a tough one to beat for those living in the snow belt.

The 2017 model year Fusion is a well-rounded choice for commuters and families. Its available adaptive cruise control has Stop & Go technology, meaning the car can come to a complete stop when needed and then will automatically accelerate again when it’s safe. Fuel economy on the gas-only trims is lackluster. The available Fusion Hybrid gets superb gas mileage, and the Fusion Energi has a plug-in hybrid powertrain that allows for up to 21 miles of all-electric range. It’s not as much as the 27 miles offered by the Hyundai Sonata Plug-In, but it should be good enough for many city dwellers.

The 2017 Ford Fusion received an overall five-star (out of five) rating from the National Highway Traffic Safety Administration. It matches new-car rivals like the Toyota Camry, Honda Accord, Hyundai Sonata, and Mazda 6. NHTSA crash-tested each car in several subcategories to get to the overall scores. Most of those sedans scored four stars in the rollover subcategory; the Accord received five stars, giving it a slight edge.

The other central crash-testing organization is the Insurance Institute for Highway Safety, and it awarded the new Fusion its ‘Top Safety Pick’ designation, its second-highest honor. The Chevrolet Malibu also received this IIHS award. The Honda Accord, Toyota Camry, and Mazda 6 achieved the highest award, the ‘Top Safety Pick Plus.’

Like other midsize cars, the Ford Fusion has traction control, stability control, a backup camera, tire pressure monitoring, and airbags. Unlike some rivals, the Fusion comes standard with knee airbags, as does the Toyota Camry. Some shoppers could consider all-wheel-drive a safety feature, as it provides extra peace of mind in bad weather. The Fusion is one of the few midsize sedans to offer AWD optionally. Only the Subaru Legacy comes with it as standard.

There is a wide range of driver safety aids that are standard on the Platinum trim and available on the SE, Titanium, and Sport models. This equipment includes automatic high beams, rain-sensing wipers, blind-spot monitoring, rear cross-traffic alert, lane-keeping assist, forward-collision warning, and automatic emergency braking. The adaptive cruise control has Stop & Go technology, which means that when a car in front of the Fusion comes to a complete stop, as is common in traffic, the Fusion will automatically brake to a halt. Then it will accelerate back to the preset speed when traffic starts moving again. Few cars offer this Stop & Go technology, and the Ford system works very well.

The Fusion is a good value. For around $23,000, buyers get a sleek midsize sedan with agile handling and a roomy interior. It also comes with great standard features. It costs more than the Kia Optima and Subaru Legacy, but less than the Honda Accord, Mazda 6, or Toyota Camry. Its top-flight Platinum trim comes in at around $38,000, which is a lot of money. The Camry XLE V6, by contrast, costs about $4,000 less.

Adding options raises the cost even more. Shoppers selecting a few packages for the SE or Titanium trim may still get some good value, but adding features to the Platinum can quickly push the price over $40,000, which is luxury-car territory.

The Ford Fusion has average predicted reliability and depreciation. Models like the Honda Accord and Toyota Camry keep their values intact better when it comes time to sell, and they have above-average dependability.

The Ford Fusion has useful technology features, with standard keyless entry, push-button ignition, a CD player, Bluetooth, a 4.2-inch screen, Ford SYNC infotainment, and a USB port. All of its chief rivals have larger standard screens. The Mazda 6 has a seven-inch screen with voice-activation, and it and the Subaru Legacy include HD Radio. The Fusion has competitive base features.

Midsize sedans are one of the most practical vehicle types on the market, which is a large part of why they’ve remained popular as a segment. The Ford Fusion has space for four adults and all of their stuff. Standard front-wheel-drive helps in typical driving conditions, while available all-wheel-drive gives it extra traction when the weather turns lousy.

The Ford Fusion has four cup holders, door storage bins, a glove compartment, and a large center console. Those are typical features of the category. Likewise, cargo space is 16 cubic feet, which is very good. The rear seat has a trunk pass-through, meaning large items can be placed across the trunk and the back seat area. The rear seats can also fold to make more room. The Fusion’s available all-wheel-drive and ability to transport skiing equipment with the trunk pass-through make it a practical winter adventure vehicle with better handling than an SUV.

Style is on Ford’s side. The body looks elegant, like a well-drawn sports sedan. It has excellent proportions, attractive from all angles. Its thin grille and headlights give it an aggressive aura, while the narrow body and low roof round out the appeal.

Inside, the understated style continues, with a sleek cabin that doesn’t bother with flashy chrome or oversized air vents. Ford keeps things formal and tech-driven. The straightforward controls and large steering wheel make the driver layout one of the best available in a midsize car.

The interior is reasonably functional, with door storage bins and a large center console bin. The front and back seats have dual cup holders. The door handles are high on the door. The seats are comfortable, with plenty of space in both rows. Interior space is very similar to rivals.

The Fusion is one of the sportiest cars in its class to drive. It has secure handling and a quiet ride. The body feels rigid in corners, and it is stable on the highway. When it’s equipped with turbocharged engines and all-wheel-drive, the Fusion feels more like a European sports sedan than a domestic family car. Its only real competition in the segment comes from the Mazda 6, which has better handling and more lively driving dynamics.

The Fusion is quicker than the Mazda, though, especially in a straight line. The available Sport trim and its massive V6 turbo engine are immensely rewarding to drive, with superb grip thanks to the all-wheel drivetrain and adaptive suspension dampers. All turbo engines are enjoyable to drive, though the hybrids and base gas engine lack power.

The six-speed automatic transmission changes gears smoothly, as does the CVT.

The interior feels snug and comfortable, again, similar to a sports sedan. The seats are supportive and well-bolstered, helping occupants stay planted during hard cornering. The steering wheel is communicative without transmitting too much road feel, and excellent sound insulation keeps noise to a minimum.
Rivals like the Toyota Camry and Honda Accord are more relaxing to drive. Both offer smoother suspensions and a more luxurious experience. An exception is the Honda Accord Sport trim, which has larger wheels and a sport-tuned suspension, hurting ride quality while not making it significantly sportier to drive.
The Fusion hybrid trims are quieter and more subdued. The Energi’s all-electric ability allows near-silent, gas-free operation for up to 21 miles before the gasoline engine kicks in.

There are six available powertrains for the Ford Fusion, including one hybrid and a plug-in hybrid. None of the four gas engines get particularly strong gas mileage. The 2.5-liter and turbo 2.0-liter four-cylinders get an EPA-estimated 25 mpg combined, while the SE trim’s available 1.5-liter turbo gets 23 mpg overall. Not surprisingly, the Sport trim, with its turbocharged V6 and standard all-wheel-drive, gets the worst fuel economy, with just 20 mpg on average. The V6 Sport requires premium fuel, while the rest take regular unleaded.

The Ford Fusion Hybrid employs a 2.0-liter gas engine and an electric motor to create 188 horsepower, and this combination gets an estimated 42 mpg combined. That’s better than the Camry and Hyundai Sonata hybrids (40 mpg), but it lags the Accord (48 mpg) and Chevrolet Malibu Hybrid (46 mpg).

The Ford Fusion Energi uses the same 2.0-liter engine making the same power, but it has plug-in technology that allows the owner to recharge the car’s lithium-ion battery. This gives the Energi 21 miles of all-electric range, which is pretty good. Its chief rival is the Hyundai Sonata Plug-In Hybrid, and that model has a 27-mile range. The Energi’s 97 mpge lags the Sonata’s 99 mpge.

The Ford Fusion lags the efficiency of top fuel-savers in its class. Nonetheless, it has a reasonable gas-only fuel economy considering the excellent driving performance, and the hybrid powertrains have impressive gas mileage that will satisfy owners.

There are five main Fusion models: S, SE, Titanium, Sport, and Platinum. With six available powertrains, including a hybrid and Energi plug-in hybrid, plus front- and all-wheel-drive, shoppers have many options to choose from.

The Fusion SE adds several features and unlocks more engine choices for $24,615. It comes with the 2.5-liter gas engine, and the hybrid, Energi plug-in hybrid, and 181- and 245-horsepower turbos are available. It has 17-inch wheels, power front seats, and satellite radio. The Hybrid SE and Energi SE retail for $27,465 and $33,995, respectively.

The Fusion Sport gets the 325-horsepower V6 turbo and an active suspension for $34,480. It also has 19-inch wheels, leather/leatherette upholstery, but it loses the WiFi and Sony sound system. All-wheel-drive is standard.

The top-of-the-line Fusion Platinum trim is as nicely-equipped as some luxury cars. It comes with a suite of driver safety technology, including blind-spot monitoring, rear cross-traffic alert, and lane-departure warning. It also has front and rear parking sensors. Amenities include a power sunroof, automatic parking assistance, heated/cooled front seats, a garage door opener, leather interior trim, a heated steering wheel, adaptive cruise control, and a navigation system. The Hybrid Platinum and Energi Platinum are priced at $38,005 and $41,995, respectively.

If the editors of Autolist were on the market for a midsize sedan and the Ford Fusion, in particular, we would lean toward the Fusion Sport. It has most of the Titanium’s features, plus standard all-wheel-drive and the potent turbocharged V6 engine. Its active suspension makes the most of the Fusion’s sports sedan tendencies, with sharp handling and superb acceleration. It has standard dual-zone climate control, exclusive upholstery, heated front seats, driver’s seat memory, and automatic LED headlamps. Not bad. Excellent fuel economy is unfortunately sacrificed in the process. 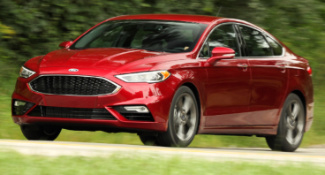 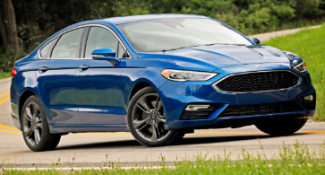