Powertrain: An electric motor with a 60-kWh lithium-ion battery pack, with 200 horsepower and 266 lb-ft of torque, mated to a single-speed transmission and front-wheel-drive.

The 2020 Chevrolet Bolt earned an overall safety rating of five out of five stars from the National Highway Traffic Safety Administration (NHTSA). It received five stars in the rollover and side crash tests and four stars for the frontal crash tests. The Insurance Institute for Highway Safety (IIHS) gave the Bolt EV the highest rating of Good across five crash tests.

All Bolt models come with the Teen Driver system, allowing owners to program individual keys to limit top speed, audio volume, and even track where the person assigned to that key is.

Since the Chevy Bolt EV debuted, Kia and Hyundai have entered the electric vehicle market with affordable models that offer more standard equipment and a higher quality interior for roughly the same price as the 2020 Bolt. But there are still signs of deep cost-cutting, including thin carpets and hard plastics inside the cabin. It doesn't suit a car that costs this much, especially when Hyundai and Kia, for example, can produce nicer interiors.

It's also a shame that items that come standard on rivals, such as heated front seats, DC fast charging, and automatic emergency braking, are still options on the Bolt. Considering it's no longer the least expensive long-range EV on the market, these omissions are more galling than before.

The Tesla Model 3 is often compared to the Chevy Bolt, but despite its higher pricing, it does not have Apple CarPlay and Android Auto compatibility, which is standard on the Bolt. But the Bolt does not have the option of a built-in navigation system at any price. Standard technology features include the Bolt's 10.2-inch touchscreen and the MyLink infotainment system, which provides Apple CarPlay, Android Auto, two USB ports, a Wi-Fi hotspot, satellite radio, and a six-speaker audio system.

The large touchscreen is central and easy to use, and the infotainment system has handy menus that display a wide range of information, including battery usage. One downside to the system is that it is slow to respond to inputs and may take some patience on your part to operate. The available Infotainment Package adds on two rear USB ports, a seven-speaker Bose premium audio system, as well as wireless charging.

The 2020 Bolt is about as practical as an average-size crossover and seats up to five passengers. There is enough head-and legroom for adult passengers in both the front seats and rear seats; however, despite the spacious cabin area, the seat cushions are flat and may become uncomfortable, especially during long trips.

Drivers will appreciate the standard height-adjustable driver's seat and the telescoping steering wheel, which helps you settle into a comfortable driving position with ease. A commanding seating position and small quarter windows help passengers to see past the front roof pillars.

There are 16.9 cubic feet of cargo space behind the rear seats. When these seats are folded flat, the cargo space increases to 56.6 cubic feet. In comparison to its rivals, the Chevy Bolt provides average cargo space for its class. The Nissan Leaf and the yundai Ioniq provide 23.0 cubic feet behind the rear seats. There is a useful compartment behind the electronic shifter that can hold a smartphone, and the center console has been generously proportioned. However, the cupholders are too small, and the three buttons below the climate control functions offer no function at all.

Apart from some bright colors and slightly revised exterior details, the Chevy Bolt hasn't changed much since it was launched for 2017. Though not closely resembling other Chevrolet models and being quirky enough for those who think electric cars still need to look different, it has a reasonably distinctive profile. But while Chevy would like to call it a crossover, it's far from an SUV. It cuts a similar shape to the Kia Niro EV, a close rival.

The Bolt really needs a makeover inside. Hard plastics are everywhere inside, and it falls behind the perceived quality of the Hyundai Kona, Kia Niro, and the Tesla Model 3. Chevy did try to spice up the dashboard with textured materials to add a unique touch to the overall interior styling, but it doesn't solve the fundamental problems. The seats are thinly cushioned, with some drivers noting that they can feel the hard seat frame through the padding, adding to discomfort on long drives. Cloth upholstery for the seats are standard, but if you want to add a little more luxury, there is an option for leather upholstery and a leather-wrapped steering wheel. On a positive note, the controls are logically arranged with the volume knob and tune buttons below the large touchscreen.

The Bolt accelerates quickly, holds onto the road well, and feels substantial thanks to the vehicle's battery pack positioned low. Its motor is also stronger than rivals,' and it feels quicker off the line than it really is. Unfortunately, the Bolt's suspension doesn't soak up the bumps as well as some larger cars, revealing its subcompact-car roots.

There are two drive modes available for the 2020 Bolt; a normal mode that functions like any other hatchback would and a second mode that allows "one-pedal driving" with regenerative braking when you lift off the accelerator pedal. That means there is no idle creep. The transition between friction and regenerative braking is so subtle that many reviews have hardly noticed the shift while driving.

Chevy notes that the Bolt EV can recover 100 miles of range within 30 minutes of DC fast charging at a Level 3 public station. It takes approximately ten hours to charge the 66-kWh battery pack using a Level 2 charger or a home unit connected to a 240-volt outlet. A 110-volt charger is included with the car.

The EPA rates the Bolt at 127 MPGe in the city and 108 MPGe on the highway. These ratings are above average for its class. 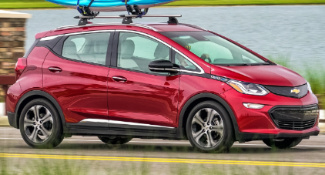 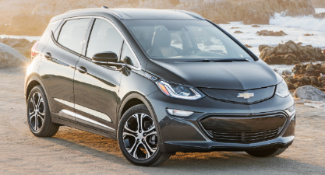