There is an additional destination fee of $875.

A hybrid is available as a standalone option.

All trim levels come stock with a front-wheel drivetrain.

The 2017 Chevy Malibu gets high marks in new car safety testing and offers many standard and advanced safety features depending on trim level and options added.

The base model has standards like ABS, a series of airbags, and stability control that acts as a failsafe adjustment when vehicles exceed safe handling limits.

LT and Premier trim levels have more robust advanced safety features available including: pedestrian detection, adaptive cruise control, rear-cross-traffic-alert, and blind-spot monitoring that has a lane-change alert function. Parking sensors for both the front and rear are available too.

A 2016 model year Malibu was tested by the IIHS and given a Superior designation in a front crash prevention test with a "Good" rating on all crash tests. It was also given a "Top Safety Pick+" score by the IIHS. The NHTSA gave the 2017 Malibu a five out of five stars for an overall safety rating.

As an economical front-wheel-drive family sedan with great safety features and consistent reliability, the Malibu excels. While the base model is an excellent value and has standard interior and mechanical offerings, some features are notably missing from the L models. The upper-tier models are worthy picks in the lineup for enthusiasts, or even families who want a little more get up and go in their car.

There are four trims available for the 2017 Malibu that include the L, LS, LT, and Premier.

The hybrid gasoline/electric model is also part of the lineup as a standalone vehicle with pricing that starts at $28,750.

I would spend a little more and go with the more loaded Premier that is reasonably priced for a top-tier model in this segment. It has a bit more power and pep with its 2.0-liter 4-cylinder powertrain configuration, plus stylish refinement where it counts.

Malibu models have a basic infotainment system and tech features for all trims including a six-speaker radio, cruise control, climate control, rearview camera, and a passive entry system with a keyless start.

For the Chevrolet Malibu Premier, the tech gets upgraded with a larger 8.0-inch touchscreen with a navigation system, wi-fi, a rear-seat USB charger, and temperature controlled front seating. The enhanced Bose nine-speaker audio system is a welcome addition in the Premier.

The Malibu is adequate in internal consoles and storage options for devices, drinks, etc., but the 15.6 cubic feet of trunk space is underwhelming. Given it is a midsize sedan though, this is not a deal breaker.

The interior front seats and rear seats are comfortable material, albeit not the highest quality until the top-tier Premier which gets a leather treatment with bucket-seats that are very luxurious.

The Chevy Malibu has evolved into an athletic contender in the midsize sedan segment that has refined its look inside and out over the years. It still retains a modest feeling, but a bit of flair and elegance has definitely been a part of its evolution.

A bigger 19-inch alloy wheel upgrade option for more exterior styling is offered for 2017 models. The LT and Premier get leather upholstery and a leather steering wheel. Stylish bucket-seats with an eight-way power adjustable driver's seat accommodate drivers of the Premier model.

Back seat headroom and legroom are not compromised and large adults can sit comfortably without bumping their heads.

The 2017 Malibu driving experience is a mixed bag and this stems from the powertrain options and some lack of attention with the lower-tier trim that other midsize sedans in the segment deal with better. With a 1.5L turbo four-cylinder engine, the base L models are agile enough and can handle cornering fine. The 2.0L engine with more aggressive 250 horsepower and buttery smooth shifting nine-speed-automatic, is definitely a sportier option that doesn't go unnoticed. Even with that much power, the Malibu Premier, nor many other mid-size sedans, can rival the Ford Fusion's unique 2.7L turbocharged V6 that muscles out an impressive 325 horsepower.

The Malibu hybrid option has effective and seamless braking thanks to the regenerative brakes. The Chevrolet Malibu stands out from the pack in braking as most other rivals in the hybrid segment have mediocre braking capabilities.

The Chevy Malibu is very fuel efficient and drivers will enjoy the gas mileage from 1.5-liter engine that is EPA-rated at 27/36/30 mpg city/hwy/combined. Or for ultra economy, The Malibu hybrid gets 49 mpg for the city and 43 mpg highway miles.

The base and hybrid models offer excellent fuel economy, while the Premier pays a small price in fuel-efficiency for an increase in performance and power. 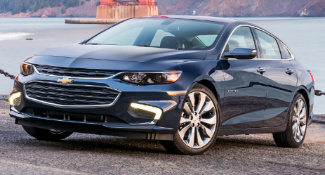