Would we buy one? Yes, this 2021 F150 should be at the top of your full-size truck shopping list.

Powertrain: The 2021 F150 is available with a variety of powertrains:

The F150 Powerboost that we tested is a hybrid with a 3.5-liter turbo V6 and an electric motor for a total of 430 horsepower and 570 lb-ft of torque.

There’s also a diesel version as well: the 3.0-liter turbodiesel V6 has 250 horsepower and 440 lb-ft of torque.

The F-150 lineup starts with the XL, then the XLT, Lariat, King Ranch, Platinum, and top-end Limited. A high-powered Raptor version is expected in the near future.

All models come with a ten-speed automatic transmission and either rear-wheel-drive or optional four-wheel-drive.

Every new F150 pickup truck from the XLT trim level and up comes standard with what Ford calls its CoPilot 360 2.0. This includes pre-collision alerts and braking with pedestrian detection, blind-spot monitoring with cross-traffic alert, lane-keep alert and assist and automatic rear braking.

Unfortunately, adaptive cruise control isn’t part of that package but it can be added with other option packages on most models or added as a standalone group for another $750.

Our Ford F-150 Hybrid tester also has the $995 Co-Pilot360 Active 2.0 Prep Package. Wow. Mouthful. So what does that mean? It means this truck is almost ready for handsfree driving on the freeway, something similar to Cadillac’s SuperCruise that General Motors will be rolling out to other vehicles in the near future.

In Ford’s case, this truck has all the necessary hardware. Once the software is available…likely in the Fall of 2021, the automaker will be able to send the software to this truck over the air for another $600. Just another $600 for that software will then make this truck fully hands-free capable.

While this F150 is our new favorite model on the market, the pricing is pretty steep for a lot of the models.

The loaded Lariat FX4 with the Powerboost hybrid engine that we tested stickers for $70,640. That is a lot of money for this truck. That said, it is pretty loaded up: heated and cooled leather seats, panoramic moonroof, power tailgate, 12-inch infotainment system, onboard generator, four-wheel-drive, upgraded audio system, digital instrument panel, the FX4 offroad package, a full suite of active safety gear, etc.

What’s even more crazy is that this isn’t even the top of the line F150. If you loaded up the Limited trim — that’s the best F150 Ford currently offers — it would roll out the dealership door at just under $80,000!

So which would we choose? Honestly, we’d be pretty happy with just the XLT with the 2.7-liter EcoBoost. That gives you a great combination of functionality, power, and comfort that’s really hard to beat. And it does so without a sky-high price tag.

Since this is the Lariat trim level, you get the massive 12-inch digital instrument panel for the drive and another 12-inch infotainment touchscreen in the dashboard.

The digital dashboard has a hugely customizable screen and one that’s really useful. Meanwhile, the infotainment system is Ford's latest version of Sync called Sync 4, and it's great in this application. The screen is clear and responsive to your inputs, the system's response is quick, and the layout is intuitive. This truck also has wireless Apple CarPlay and Android Auto connectivity.

There’s also an app to control the vehicle called FordPass Connect, which allows users to lock/unlock, check the vehicle status, use or schedule the remote start, get trailer theft alerts, check the trailer lights to make sure they’re connected properly, and more.

Since this is a truck, there’s already gobs of practicality built in. There are three cab options (the base two-door version, then the SuperCab, which uses two full-size doors up front and then two smaller doors behind them, and the SuperCrew version, with four full-size doors) and three bed lengths depending on the trim: 5.5 feet, 6.5 feet or 8 feet.

Ford then goes above and beyond with a variety of cool, useful features (though many of them are optional).

There’s also a Pro Power onboard generator standard on the PowerBoost hybrid and optional on some other engine trims. It can supply up to 7.2 kilowatts of power to outlets in the bed.

Our tester came with Ford's Interior Zone lighting. This lets you select up to four zones of lighting around the truck to aid you in whatever it is you happen to be doing. As someone who has set up more than a few campsites in the dark, that’s a handy feature.

It also had a cool trailering feature in the infotainment screen. It included a checklist for attaching various types of trailers, the ability to add the profiles of different trailers to the truck so it will remember each and its respective settings (like what type of trailer, the level of brake effort, the brake type, etc). It's also where you turned on the trailer sway control.

Inside you've got USB A and C outlets below the dash plus one more of each in the center console, plus a 120v outlet.

Our tester has this optional Interior work surface…you hit this button to fold the shift lever when the truck is parked, and then you can open up this surface here. It’s actually pretty handy and it’s $165 well spent.

In terms of space, there’s plenty of it for passengers and cargo alike. The rear seats also flip up easily for extra space. The lithium-ion battery is neatly tucked beneath the bed between the framerails.

In terms of this hybrid’s work ethic, it’s more than robust. Payload (that’s how much weight you can safely put in the bed) is rated at about the same as the smaller 2.7-liter turbo V6 model. Towing capacity, meanwhile, clocks in at more than 12000 pounds when properly equipped; that’s huge — enough for a 30-something foot sailboat or a multi-horse trailer — and the horses.

The looks on this new 2021 model are definitely evolutionary rather than revolutionary when compared to the previous generation F150. When you build the most popular vehicle in America for decades, you don’t go messing with a winning formula.

That said, this new generation is definitely sleeker and more sophisticated than before, with wraparound daytime LED headlights that are cleanly integrated into the grille, which then continue into the fog lights.

Our tester came with slick 18-inch rims, which flanked optional power running boards. At the back, we’ve got LED taillights and a power tailgate. And yes, before you ask, all new F150 models still have a fully aluminum body sitting on top of a steel frame, just like the previous generation.

Our tester has the optional FX4 package, which runs about $1000. It includes a unique Rock Crawl driving mode when in four wheel drive, off-road-tuned front shocks, skid plates, hill descent control and rubber floor mats inside that users can remove and hose off.

The overall look is both bold and modern without being overly styled.

Inside there’s too much cheap plastic for our taste...especially when this truck can hit $80,000. But otherwise the interior is nicely laid out and plenty comfortable.

We tested this Ford hybrid for about a week and we loved every minute of it.

This powertrain is great. 430 horsepower and 570 pound-feet of torque can pretty much handle anything you throw at it. The hybrid system gives the 3.5-liter V6 a nice extra bump of power and you can barely tell when the truck switches from full battery power (at low speeds) and instead engages the gas engine.

Acceleration is smooth off the line, you’ve got plenty of power whenever you need it…on ramps, passing situations, around town.

The 10-speed transmission stays completely out of the way and the ride quality -- while maybe not as good as the Ram 1500 -- is still plenty good when the bed is empty. And the road manners are surprisingly refined for full-size pickups like this.

The hybrid powertrain on our tester is connected to a 10-speed automatic transmission and the combination is good enough for an EPA fuel economy rating of 24 MPG for combined, highway, and city driving for this four-wheel-drive model. Rear-wheel-drive versions do even better, clocking in at 25 combined, 25 in the city and 26 on the highway. That makes the F-150 Powerboost it the most fuel-efficient gas-powered full-size truck on the market.

What does that mean for the real world? Well, for this first drive, we’ve been testing this version for a week now, in both city and highway driving, some even with a full payload, and over about 150 miles, we’ve averaged about 17 miles per gallon. While that’s a bit off from the official EPA numbers, it’s still really impressive for a truck with this amount of power and capability.

Non-hybrid models are also plenty competitive for their efficiency. 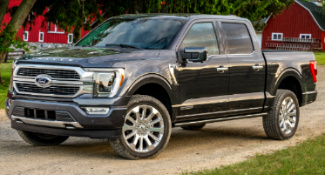 2021 Ford F-150 Review + Video
David Undercoffler | Dec 24, 2020
Ford's F150 is all new for 2021 and is now in its 14th generation. This new model adds a Hybrid powertrain to the mix for the first time, as well as a host of innovative new tech features. Find out why its our current favorite for full-size trucks. More ... 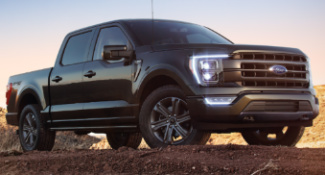