A 301-horsepower, 3.6-liter V6 with 272 lb-ft of torque, six-speed automatic, and front-wheel-drive. All-wheel-drive is optional

The 2017 Chevrolet Equinox is a compact crossover and competes in a wildly competitive and popular market. Direct competitors to the Equinox include the Toyota RAV4, Honda CR-V, GMC Terrain, Mazda CX-5, Hyundai Tucson, Kia Sportage, Subaru Forester, and Ford Escape, to name a few. It's long been a popular model for Chevrolet, too.

While a reasonably large vehicle by compact crossover standards, the Equinox is smaller than its larger sibling, the Chevrolet Traverse, and distinctly different from the GMC Terrain with which it shares numerous components. It distinguishes itself from its competition with respectable fuel economy numbers, particularly from the base inline four-cylinder engine, a robust optional V6 motor, handsome styling, passenger room, seat adjustability, and a moderate selection of technology and safety equipment.

There are four trim levels available on the Chevy Equinox – L, LS, LT, and Premier. Additionally, two engine options owners can choose from – the base 2.4-liter inline four-cylinder that makes 182 horsepower and 172 pound-feet of torque, and the more powerful (but thirstier) 3.6-liter V6, which churns out 301 horsepower and 272 pound-feet of torque. A six-speed automatic is the only transmission available. Except for the base L model, all models can be specified with either front-wheel-drive or all-wheel-drive.

As part of a recent refresh, Chevrolet made a rearview camera standard equipment on all Equinox models, a welcomed update. General Motors' OnStar telematics system remains standard, which can make emergency calls and detect if the airbags have deployed, and call for assistance. Opt for the Driver Confidence Package or Driver Confidence Package II, and you'll get side blind-spot monitoring, rear cross-traffic alert, rear parking sensors, forward collision alert, and lane departure warning.

Crash ratings for the Equinox are good but not outstanding. The National Highway Traffic Safety Administration (NHTSA) overall crash test ratings awarded the Equinox four stars out of a possible five. The Insurance Institute for Highway Safety (IIHS) rated the SUV as 'Good' in all categories, while the vehicle's crash mitigation systems received only a 'Basic' score.

While some vehicles in this class offer more driver assistance technology, like lane keep assist and adaptive cruise control, the Equinox doesn't offer as many systems. And the ones that are offered are optional extras on higher tier trim levels. Newer rivals, such as the Honda CR-V, Subaru Forester, and Toyota RAV4, are making these features standard on some trim levels.

That's not to say the Equinox isn't a safe vehicle or doesn't have offer modern safety equipment and technology, but other compact crossovers objectively outclass it in the safety arena.

The Equinox's starting prices begin at $23,100 and climb to $31,790 for the top Premier model. In terms of standard equipment, even the base model Equinox comes relatively well equipped with a seven-inch touchscreen in the dash, Bluetooth connectivity, OnStar, a Wi-Fi hotspot, power windows and doors, cruise control, and other amenities. With the addition of all-wheel-drive in higher trims come other goodies like satellite radio, leather upholstery, heated front seats, and a power driver's seat.

On the value front, the Equinox lands somewhere in the middle compared to its rivals. It's a comfortable, capable machine but doesn't do anything monumentally different or wow with many features. And while owners do have access to upgrades and more premium materials the farther up the Equinox trim level ladder they climb, they don't have as many choices and available extras as they would in a comparable vehicle. The 2017 Honda CR-V, for example, can be had with tech features like Apple CarPlay and Android Auto, as well as safety features like lane keep assist and automatic emergency braking, to name a few.

When comparing pricing, the Equinox is right in line with its competition in terms of entry price and how much the most premium models command. For reference, a CR-V EX stickers at $30,095, the MSRP of a fully-loaded Kia Sportage SX Turbo AWD is $34,200, and a Ford Escape Titanium AWD rings in a $31,000.

The Equinox comes equipped with a decent amount of technology, but it isn't brimming with anything revolutionary. Easily one of the best tech features in the 2017 Equinox is the available in-car Wi-Fi hotspot system with 4G LTE. The ability to have Wi-Fi anywhere you have cellular service is a particularly excellent feature. It significantly adds to the Equinox's appeal, and this system is available on any trim level, including the base Equinox. Additionally, all Equinox models receive Bluetooth connectivity, a seven-inch touchscreen located in the dash, and access to GM's OnStar safety system comes as standard equipment.

The 2017 Equinox has seating for five passengers in two rows of seats. And it's the seating, legroom, and passenger comfort that is one of this vehicle's biggest strengths. With more interior space than many of its competitors, the Equinox is a solid choice for those looking for a comfortable, practical compact crossover. The Equinox offers 99.7 cubic-feet of passenger volume with 41.2-inches of front legroom and 39.9-inches of rear passenger legroom. Additionally, headroom for the front seats is rated at 40.9-inches and 39.2-inches for the rear seats.

Cargo space in the Equinox is also respectable. With the rear seats up, there is 31.5 cubic feet of storage. When you fold the rear seats down, you'll have access to 63.7 cubic feet of storage. Throughout the vehicle, there are numerous storage areas and cubbies for passengers, both front and rear. Another major plus for the Equinox is the adjustability of the backseat. Passengers sitting in the second row can recline their seats up to 8 inches and can also slide the seats back and forth – not something you see in all vehicles.

Towing may not be a priority for compact crossover buyers, but if it is, the 2017 Equinox is capable of towing up to 3,500 pounds when equipped with the V6 engine when properly equipped. Even models with the four-cylinder can pull as much as 1,500 pounds.

While it's a decidedly subjective subject, the 2017 Chevrolet Equinox is a relatively good looking, if rather sedate, looking vehicle. Mechanically, the Equinox is the same as the GMC Terrain. Where the GMC is all angles and squared-off edges, the Equinox is more rounded and sculpted. But like the GMC, the Chevrolet closely mimics the other SUV in the lineup, the larger Traverse.

Upgrading to higher trim levels like LT or Premier doesn't add much in appearance features, so the only differentiators between models are the badges and small items like chrome exhaust tips on the V6-equipped models.

The Equinox's interior design gets good marks for passenger comfort, decent material quality, and dash layout. One notable drawback to the interior was the overabundance of buttons on the dash and the infotainment system's sometimes sluggish response time. A particular highlight are the seats which are very good, particularly the front seats.

The driving experience in the Equinox is competent if not all together unremarkable. Mechanically unchanged since the second-generation model arrived for 2010, the Equinox offers a smooth, comfortable ride. To help with that, Chevrolet installed a noise-canceling feature that assists in dulling engine noise and triple door seals and sound damping glass, all of which help make the cabin a more comfortable place to be.

Performance from the base four-cylinder engine, while adequate, isn't by any means sporty. It returns good fuel economy and makes ample power for most situations but can be noisy under full power and otherwise rather unremarkable. The V6 engine improves the Equinox's performance and is more comfortable with highway cruising when passing or merging into traffic. Some reviewers reported that the Equinox's transmission could be slightly clunky and slower to respond than they would like.

The Equinox isn't a particularly large vehicle, so low-speed maneuvering is relatively easy and comfortable. Outward visibility isn't one of the Equinox's strongest points, making the backup camera even more helpful. When it comes to more aggressive driving, the Equinox responds moderately. The electronically assisted steering tends to be vague, and the brakes are merely adequate. Sportier rivals such as the Ford Escape are better suited for more enthusiastic driving in the corners.

Compact SUVs benefit from pulling some of the best pieces from two different worlds – those of the sedan and large SUVs. One element they typically bring to the table is fuel efficiency, especially when compared with mid-sized SUVs.

The Environmental Protection Agency (EPA) rates the four-cylinder, front-wheel-drive Equinox variants at 21 mpg city and 31 mpg highway, and 25 mpg combined. Opt for all-wheel-drive, and those numbers change to 20 mpg city, 28 mpg highway, and 23 mpg combined. Considering the base model Equinox isn't a hybrid, those fuel economy numbers are some of the best in its class, particularly when paired with FWD only.

Stepping up to the larger and more powerful V6 engine invariably means a fuel economy penalty. Equipped with front-wheel-drive, the V6 powered Equinox will return 17 mpg city, 24 mpg highway, and a combined economy of 20 mpg. With AWD and the V6, fuel economy estimates fall to 16 mpg city, 23 mpg hwy, and 18 mpg combined. For both engine choices, adding all-wheel-drive doesn't negatively impact fuel economy as much as you might think, which isn't always the case among compact SUVs.

Next up is the Chevrolet Equinox LS, which has an MSRP of $25,510. The LS features everything found on the Equinox L and adds steering wheel-mounted controls and the option to add all-wheel-drive. Doing so brings the LS's price to $27,260.

The Equinox Premier, the top of the line model, starts from $30,040 for the front-wheel-drive version and $31,790 for the AWD model. Premier equips the Equinox with numerous optional items from the LT trim as standard equipment and adds performance tires, leather seats, heated seats, and a power driver's seat. Except for the Equinox's base model, the more power V6 engine is optional, just like the all-wheel-drive system.

The LT access to the most amenities, safety features, and equipment that makes the Equinox an attractive option in the first place but allows for more customization than the other models and without getting unnecessary features. 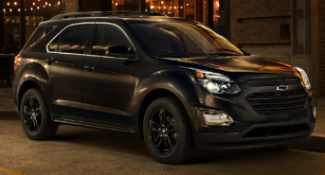 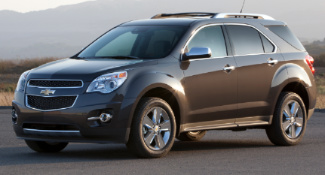