Would we buy one? We're not sure.

Powertrain: Chevrolet nixed the 4-cylinder engine for the 2020 model year, so all Chevy Impalas are powered by a 3.6-liter V6 engine, making 305 horsepower.

Backing up the engine is a six-speed automatic transmission, and all 2020 Chevy Impalas are front-wheel drive.

Several safety features are available on the base trim as part of the Driver Confidence Package. Those features are standard on the Chevy Impala Premier trim and include blind-spot monitoring with lane-change alert, lane departure warning, rear cross-traffic alert, and rear parking sensors. Reserved only for the top trim are lane-keep assist, adaptive cruise control, and advanced forward-collision alert.

The IIHS did not pick the Chevy Impala as a 'Top Safety Pick,' primarily due to only receiving an 'Acceptable' rating in the small overlap crash test. The NHTSA did award the Impala a 5-star crash test rating. More modern competitors in the segment, like the Toyota Avalon, which received the 'Top Safety Pick Plus' designation, include features like blind-spot monitoring and lane departure warning as standard on all trims and fare better in the overlap crash test.

The Chevy Impala is a value-leader in the full-size sedan segment, undercutting the competition at each trim level. While not featuring the most premium offerings, the Impala brings much to the table worth considering. Offering standard features like alloy wheels, keyless entry, and a V6 engine, the base Chevrolet Impala LT wouldn't be considered bare-bones.

Because of its reasonable retail price, reviewers found the most value in the top-tier Chevrolet Malibu Premier. While not a luxury car, it includes many features modern buyers expect, and pricing is more competitive. With perforated leather seats, heated front seats, and heated steering wheel, a very well optioned Impala in Premier trim can still fall south of $40,000, and that's before any dealership incentives.

The Chevrolet infotainment system, MyLink, is one of the best on the market. Running on an 8.0-inch touchscreen, the system is fast and well thought out. This system is standard on both trim levels and includes 4G LTE Wi-Fi, Bluetooth connectivity, Apple CarPlay, and Android Auto. Three USB ports and dual-zone automatic climate control are also standard.

More premium features are available as options, or standard with the Premier trim. Those include satellite radio, a premium Bose audio system, and navigation with real-time traffic. A dual-panel sunroof is available only on the top-tier model.

Like most of the segment in 2020, the Chevy Impala is front-wheel-drive only. Competitors from Chrysler, Toyota, and Dodge have all-wheel-drive variants, making them more compelling choices for those living in snowy regions.

The exterior of the Chevy Impala is far from unattractive, with simple styling that contrasts nicely against more assertive-looking competitors like the most recent Toyota Avalon and Nissan Maxima.

On the inside, the Impala has a similar vibe. It does not hide that it is a large family sedan; there is nothing racy about it. The Impala is spacious and comfortable, both front seats and rear seats offer plenty of legroom, and padding is just right.

The Impala is value-priced compared to competitors, and that savings does show in some areas of the cabin where cheap plastics are prevalent. However, Chevy did make sure to include soft-touch materials on commonly-used surfaces.

With both Impala models now powered by the standard 3.6-liter V6 engine, the large car has plenty of power for everyday driving. Though it is not a sports sedan, the Impala delivers a comfortable ride while still feeling nimble. Reviewers compared its road manners to its smaller sibling, the Chevrolet Malibu.

A common complaint was a vague feeling from the steering wheel. The suspension absorbs many road imperfections, which provides a smooth ride but rather uncommunicative steering.

The EPA estimates a serious drop in fuel economy when running E85 in Flex-Fuel-capable Impalas. The mileage estimates are 20/14/16 mpg.

Gas mileage is slightly below-average for the segment. By comparison, the Toyota Avalon gets an EPA rating of 32/22/25 mpg, while the available hybrid pushes the Avalon to 43 mpg in all categories. The 6-cylinder Chrysler 300 also beats the Chevy Impala on the highway at 30 mpg. 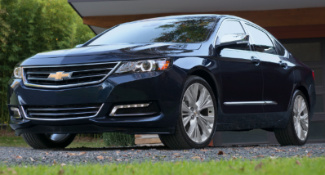 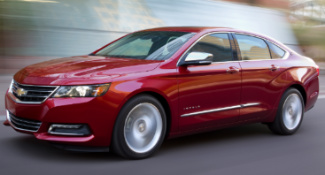